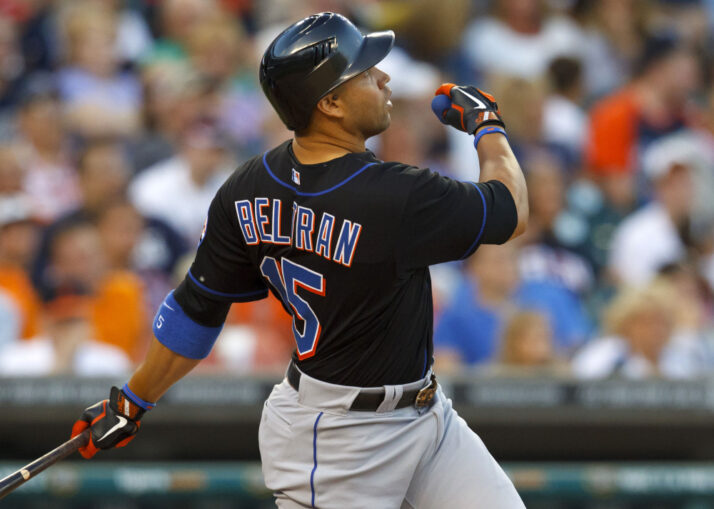 Carlos Beltran is officially eligible for the Baseball Hall of Fame, after being added to the 2023 BBWAA ballot earlier this week alongside some other former Mets like R.A. Dickey and Francisco Rodriguez.

Beltrán is one of the more intriguing names to be added to the ballot, and his Hall of Fame candidacy is sure to stir up debate. Beltrán’s on-field numbers speak for themselves. He is one of only four players in MLB history with at least 1,500 runs scored, 2,700 hits, 400 home runs, and 300 steals, joining Barry Bonds, Willie Mays, and Alex Rodriguez. He was named an All-Star nine times and finished his career with an OPS of .837 with a slash line of .279/.350/.486. He also won three Gold Glove awards and had a reputation for being one of the best center fielders of his era.

However, Beltrán’s candidacy is clouded by his role in the 2017 Houston Astros sign-stealing scandal, which could cause some voters to wait on electing Beltran or never vote for him at all.

But if Beltrán is one day enshrined in Cooperstown, would he become the third player to don a Mets cap in the Hall alongside Tom Seaver and Mike Piazza?

Beltran played 20 MLB seasons and had stops with the Royals, Giants, Cardinals, Yankees, and two different stints with the Astros in addition to the Mets. Although he won his only World Series title with the Astros, the options for Beltrán’s Hall of Fame cap would seem to come down to the Mets, Royals, and a blank cap.

The Case for the Mets

Beltrán played with the Mets from 2005 to 2011, when he was traded to San Francisco midseason. During his time in New York, Beltrán made five All-Star teams, won three Gold Gloves and two Silver Slugger Awards, and received MVP votes three times, including a fourth-place finish in 2006. He hit 149 of his career 435 home runs in New York, and his 129 OPS+ mark is the highest he posted with any team, other than his half-season with the Giants in 2011.

Beltrán is the third highest-rated Mets position player in terms of bWar, trailing only David Wright and Darryl Strawberry. He also ranks fifth all-time on the Mets leaderboard in OBP, is eighth in on-base percentage, eighth in runs scored, seventh in doubles, and sixth in home runs.

To put it simply, Beltrán is, statistically, one of the best Mets of all-time. He also told MLB.com in 2019 that he would choose the Mets as the team to represent him should he be elected to the Hall.

However, Beltrán’s time with the Mets wasn’t always harmonious. At times, Beltrán had a contentious relationship with Mets leadership during his playing days, especially regarding his 2010 knee surgery. He is also, fairly or unfairly, most remembered by many fans for being caught looking at an Adam Wainwright curveball to end the 2006 NLCS.

Then there was Beltrán’s (very) brief stint as Mets manager. Two years after his playing career ended, Beltrán was hired to replace Mickey Callaway after the 2019 season. However, Beltrán never managed a game in New York after he and the team agreed to part ways following the revelation of his role in the Astros sign-stealing scandal. 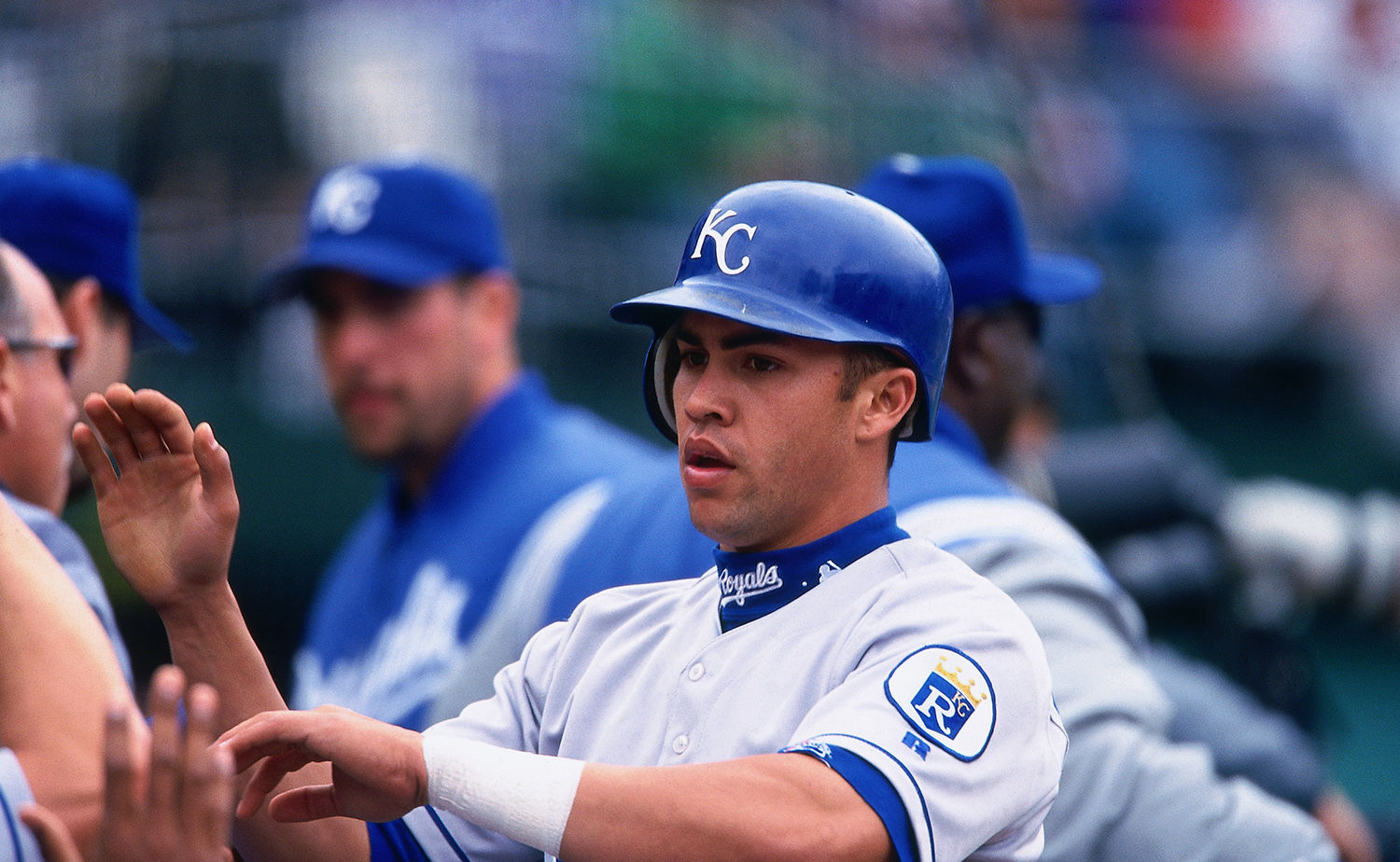 Photo by Brad Mangin/National Baseball Hall of Fame and Museum

The Case for the Royals

If Beltrán’s history with the Mets simply has too much baggage, the Hall of Fame could choose to enshrine him in a Royals cap if/when he is elected.

Beltrán spent the first six-and-a-half seasons of his career with the Royals and won the American League Rookie of the Year in Kansas City in 1999 after hitting .293 with 22 home runs and 108 RBIs. He also finished ninth in the 2003 MVP voting in Kansas City after slashing .307/.389/.522 that season, along with 26 homers and 41 stolen bases.  He was also selected to the All-Star team as a member of the Royals in 2004.

Beltrán is fourth in Royals history in OBP, trailing only Danny Tartabull, Mike Sweeney, and George Brett. He is also eighth on the franchise’s all-time stolen base list and is eighth in bWAR among position players.

The Case for a Blank Cap

The Mets and the Royals aren’t the only options should Beltrán get elected to the Hall of Fame. He could also enter with a blank cap.

There are dozens of Hall of Famers with a blank or no-logo cap on their plaques, with recent examples including Greg Maddux, Mike Mussina, and Roy Halladay.

If Beltrán and the Hall of Fame feel as though there’s no clear argument to be made between the Mets and Royals, they could opt to split the difference and simply choose to honor his entire career by not adding a logo to the plaque.

It also should be noted that, in addition to his time in Kansas City and New York, Beltrán made two All-Star games with the Cardinals in 2012 and 2013. He also won his only World Series with the Astros (albeit in controversial fashion) and is also well-remembered in Houston for his historic performance in the 2004 postseason. Beltrán and the Hall may feel that there’s no one franchise that fully represents his contributions to the game, so a blank cap makes the most sense.

It’s tough to predict what will happen with Beltrán’s cap should he be elected. If Beltrán were to somehow make it on his first or second ballot, a blank cap feels like a real possibility due to the awkward end to his time as Mets manager.

However, time heals all wounds, and Mets fans already showed they were ready to embrace Beltran as he made a return to Citi Field in September to honor the life of Roberto Clemente.

From a stats standpoint, his time with the Mets stands out more than his time with the Royals, and he played the majority of his prime in Queens. Beltrán making it to Cooperstown is not a guarantee, but if he does, he should go in representing the Mets.

The post Which Cap Would Carlos Beltrán Wear in the Hall of Fame? first appeared on Metsmerized Online.