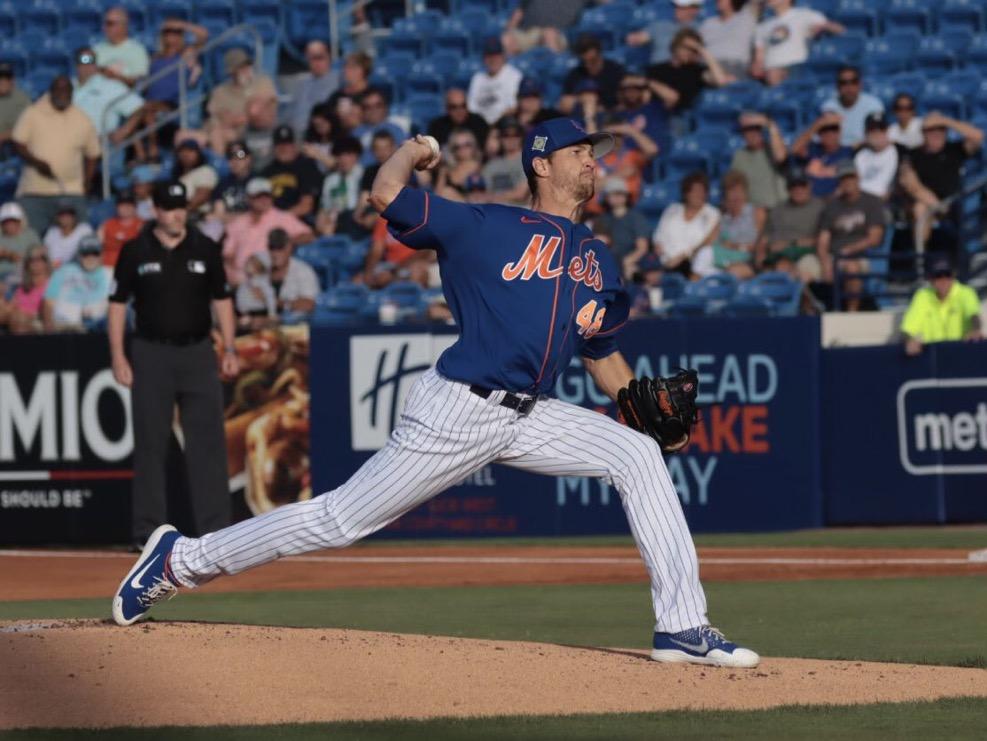 The New York Mets hosted the Houston Astros at Clover Park in Port St. Lucie, FL on Tuesday night. Making his first appearance since July 7, 2021, Jacob deGrom looked to be in mid-season form as soon as the first pitch was thrown. Mets fans can take a deep breath now that his first outing back from injury is under his belt. The Mets would go on to win their second Grapefruit League game of Spring Training, 2-0.

In his second inning of work, deGrom struck out two more Astros’ hitters, continuing a great first-day back.

In the bottom of the 2nd inning, Pete Alonso led off with a scorcher to left field, one-hop off the wall for a double, followed up by a Robinson Cano fly-out to center field. Alonso would go on to get thrown out at third, trying to advance on a breaking ball in the dirt by Jake Odorizzi. Jason Castro made a nice play behind the plate for Houston keeping the ball in front, not allowing Alonso to advance. After an Eduardo Escobar walk on a 3-2 count, Mark Canha struck out to end the inning.

Tomas Nido and Francisco Lindor both singled in the third inning, but would be erased by a 3-6-1 double-play on Jeff McNeil’s second at-bat of the game.

We would have to wait until the bottom of the 5th inning for a run to be scored in the game. Dominic Smith led off the inning by dropping a base knock into right-field, followed by a Nick Meyer single to left. A fly ball to deep center off the bat of Brandon Nimmo would advance both runners to second and third. Lindor hit a chopper to Astros shortstop Goodrum, but it proved to be too tough to handle, allowing Smith to score, and Meyer advancing to third. McNeil ripped one to right, bringing in Meyer to score on a sac fly, bringing the Mets lead to 2-0 over the Astros.

The Mets would never look back, handing the Astros their fourth-straight loss in Grapefruit League play. Mets pitching held the Astros lineup in-check, allowing a total of three hits, one walk, no runs and striking out 14 combined.

Trevor Williams secured his first win of the young exhibition season. He would go on to pitch two innings, allowing no hits, one walk and one strikeout. Strong outings by newly-acquired Adam Ottavino and Jose Rodriguez would help pave the way to victory. Stephen Nogosek added to the theme of great pitching for the New York Mets tonight. Rob Zastryzny, who hasn’t pitched in a MLB game since 2018, would check into the game in the top of the ninth. Zastryzny went on to strike-out the side to end the game in the top of the 9th.

Mets hitters left room for improvement, stranding 12-runners on base. Tallying six hits, three walks and maybe the most eye opening stat on the positive side – only striking out four times.

Player of the Game: Jacob deGrom.

The Mets next game will be hosting the Miami Marlins tomorrow at 6:10pm, at Clover Park.