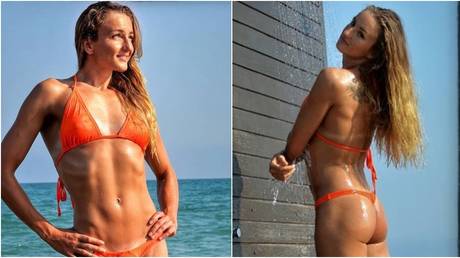 Swimming champion Elena Krawzow has spoken of her pride after becoming the first Paralympian to grace the cover of Playboy, posing topless for the famous men's magazine before heading to a glamorous party alongside fellow models.

Two-time World Championships gold medalist Krawzow headed to Germany to join some of the magazine's models – known as Playmates – last week as part of her stint on the front of the pin-up production.

The photogenic 26-year-old pouted at the camera and held her hair in her hands behind her as she stripped down for a saucy photoshoot at sea for the latest issue of Playboy in her native Germany.

Krawzow can be seen sitting on a raft on the waves in a tiny white pair of swimming pants on the cover, which advertises expert sex tips and a feature with Star Trek actor William Shatner among the other features in its October edition.

???? She's the first Paralympian to make the @Playboy cover! pic.twitter.com/m74E9vDf04

"I couldn't turn down this opportunity," said the Kazakhstan-born star with Russian roots, who was diagnosed with Sargardt disease, a genetic eye disorder, at the age of seven and has continued to progressively lose her sight since then.

"The two days of shooting that I had were great. I've always wanted to experience a day as a professional model and I did that. I had a lot of fun.

"After it became known that I was on the Playboy cover, there was, of course, a lot of excitement.

"Some were very shocked but I have to say that I have been pleasantly surprised by all the great feedback and many compliments."

Krawzow could not see the camera because of her three percent vision but she was thrilled with the stylish set of scantily-clad shots she created with the direction of the Playboy photographic team, calling them "wonderful".

No stranger to blazing a trail after setting the breaststroke 200m record on her way to a silver medal at the 2012 Paralympic Games in London, her next new experience was an event at Playboy's headquarters in Munich.

"I got to know a lot of new people and also the Playmates from previous years," she told her following of more than 10,000 on Instagram, thanking them for their support. "We got on well and had a great evening."

Krawzow joins an illustrious list of figures to have posed for Playboy, including the likes of American icon Marilyn Monroe and Russian former figure skating world champion Maria Butyrskaya.

The five-time European champion's beauty, athleticism and eye for a photoshoot on social media clearly caught the eye of editors at the long-running lifestyle and entertainment periodical, which was founded by literary lothario Hugh Hefner in 1953 and sold 50,000 copies of its first edition with Monroe as the cover star.

The German edition caused a stir in 2018 when it featured a transgender model on its cover for the first time, following in the footsteps of US Playboy by giving 21-year-old reality TV star Giuliana Farfalla the half-naked limelight.

"You are real pioneers, that's why I love you," one fan told the magazine in reply to its publicity of Krawzow's cover on social media.

"By the way, Elena, I think you're super great and pretty."

Krawzow has spent the week entertaining "a lot" of media requests. "I have really been very busy organizing interviews and filming in the swimming pool and at home," she said.

"I wanted to take advantage of the nice weather today and drive to the lake [the day] after training and filming. I was so exhausted that I slept through the whole day. Apparently I needed it."

Her first sessions back after a shoulder problem have also worn her out as she begins her preparations for the postponed Tokyo Paralympics.

"You get used to the long sessions over time," she explained. "When I'm so exhausted, I really like to think about my last vacation, the beautiful beach, the sea and my great shoots that I love to do."