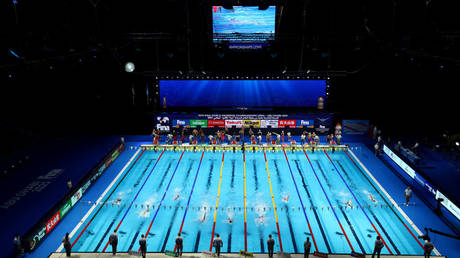 The International Swimming Federation (FINA) has suspended Russian athletes from its competitions, removed the 2022 World Short-Course Championships from Kazan and condemned the attack on Ukraine as part of a set of measures which will also see Olympic champion Evgeny Rylov investigated over a Moscow concert he attended where Vladimir Putin appeared.

FINA organize the World Aquatics Championships which will take place in Budapest in June and July and had been one of the few major sporting organizations not to have barred Russian and Belarusian athletes after the International Olympic Committee [IOC] encouraging federations to take action.

The governing body had allowed Russians and Belarusians to compete under neutral status but has now reversed that decision.

The 25m championships, previously scheduled to take place in Kazan in December, will be moved after a Fina Bureau meeting following an independent risk assessment.

FINA Bureau met, and made further decisions on Russian and Belarusian athletes and event hosting.

"Following these decisions, FINA was informed by the Russian Swimming Federation of the withdrawal of all Russian aquatics athletes from all FINA events for the rest of this year," the federation said in a statement.

"FINA maintains its strongest condemnation of the Russian invasion of Ukraine. FINA also wishes to reiterate its commitment to supporting the Ukraine Swimming, Diving and Artistic Swimming Federation as they prepare for upcoming competitions."

Beijing Games gold medalist Rylov had announced hours earlier that he would not be competing at the World Championships as a protest against the barring of Russian athletes from the Paralympic Games in Beijing earlier this month.

Rylov lost a sponsorship deal with Speedo because he was part of an estimated crowd of more than 100,000 people who watched a concert at the Luzhniki Stadium on Friday marking the reunification of Crimea with Russia.

Rylov and his fellow athletes wore national team outfits emblazoned with the letter ‘Z’, which has been seen on Russian military equipment during the Ukraine conflict and has become associated with support for Russian forces.

Putin gave a speech at the stadium under the banner ‘For a World without Nazism’.

FINA said the 100m and 200m backstroke champion at the Tokyo Games was suspected of a potential violation of its rules because of his "alleged participation" in the event.

"The FINA Executive has requested that the panel’s proceedings be expedited," it added.

The Short-Course Championships will still take place from December 17-22 2022. FINA said it was in discussions with potential new hosts.