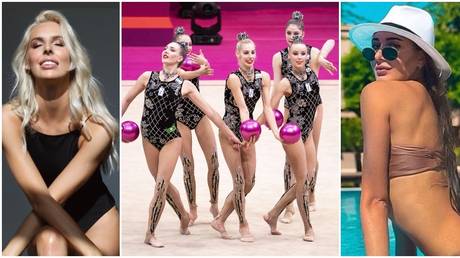 Russian talent has been a familiar sight at the top of the podium at the 2021 World Rhythmic Gymnastics Championships in Japan, which come to a close on Sunday. We look at the Russian stars sweeping the board in the team events.

While Russian queen Dina Averina has been smashing records in the individual events in Kitakyushu in recent days – capturing headlines along with twin sister Arina – their countrywomen in the team events have also been racking up titles.

That included victory in the five balls final on Sunday – adding to the gold medals they collected in the team all-round event and group all-round event, as well as a silver medal in the three hoops and four clubs final.

The Russian Gymnastics Federation (RGF) team has capitalized on the absence of rivals Bulgaria, who pulled out on the eve of the tournament after a serious injury to star performer Laura Traets.

The Russian team scooped seven out of nine gold medals on offer in Japan, with Italy’s victory in the group multiple apparatus and Belarusian athlete Alina Harnasko’s title in the individual ribbon final the only blemishes for the RGF's performers.

Sunday’s victory in the group single apparatus will be particularly sweet for the quintet in the RGF team as it is the first time that contenders from Russia have won the event in a decade.

Here are the five stars from Russia who, in addition to Averina sisters, have been big in Japan over the past five days.

At the age of 27, the Ukraine-born Bliznyuk is one of the veterans of the team and has recorded a remarkable medal haul during her stellar career.

Bliznyuk is a double Olympic champion in the group all-around event, having helped Russia to glory at the London Games in 2012 and in Rio in 2016, and has a silver medal from the same event in Tokyo in the summer.

Bliznyuk’s three golds in Kitakyushu this week mean that she is now a six-time world champion.

Bliznyuk is from strong sporting stock as her father Ilya Bliznyuk was a football goalkeeper and played for the Ukrainian national team.

"I saw my mother's medals and [Russian rhythmic gymnast] Alina Kabaeva's performance on TV and I wanted to learn the same," Bliznyuk has said of her beginnings in the sport.

"At first, my mother was against it. She said that I had to study, and took me to some very prestigious lyceum that specialized in languages. But it was all in vain, I immediately said, 'I don't want to study – I want to do gymnastics'. In the end, I achieved my goal."

The blonde star had taken a break from the sport after the 2013 World Championships in Kiev, and in 2014 she suffered an infection which led to her spending about six weeks in recovery.

However, she returned to competition at the 2016 Grand Prix event in Moscow and has since returned to top of her sport.

Born in Pushkina just outside Moscow, the 18-year-old Orlova has enjoyed a breakout tournament as a member of the senior Russian team with her three gold medals in Japan this week.

Orlova was not part of the team in Tokyo which claimed silver in the summer, but after her showing in Kitakyushu she appears set to be a mainstay of the team in the years to come.

Having started the sport at the age of four, she has previously said: “I was training for swimming, and when I came to training, I saw [rhythmic gymnastics] competitions in the sports complex and wanted to do the same.”

Shkatova, 20, picked up her first medals at World Championship level having also scooped Olympic silver in Tokyo this summer.

Training since the tender age of four, the Vladimir-born star has two European titles to her name and will look to build towards her professed aim of one day taking Olympic gold for her country.

The 17-year-old Tishchenko is another budding member of the team who looks like she will be among those to move Russia onto its next generation of success.

The Krasnodar-born starlet took up the sport aged six and has name-checked Russian former Olympic champion Margarita Mamun as her idol.

A four-time world and European junior champion, Tishchenko stepped up to the senior ranks to help the Russian team seal silver at the Tokyo Olympics in the summer, before helping the RGF quintet to their hat-trick of golds and one silver medal in Kitakyushu.

The 24-year-old Tolkacheva is now an 11-time world champion thanks to her exploits in Japan.

That haul adds to the gold medal she won at the Rio Games in 2016, although Tolkacheva was not in Tokyo this past summer as part of the team which won silver.

Born in the industrial area of Orekhovo-Zuyevo just outside Moscow, Tolkacheva has previously dated her love of gymnastics back to her childhood.

“My parents enrolled me in gymnastics for health reasons. I got interested immediately and did not think of doing any other sport,” said the star.

She has cited Russian rhythmic gymnastics legend Evgenia Kanaeva as her idol and has once again done her nation proud with results in Japan.

The team's efforts have not gone unnoticed at the very top in their homeland, with the Kremlin issuing a congratulatory message from Russian President Vladimir Putin earlier in the tournament.

“You had no equals in group all-around exercises as you enchanted the audience with exquisite mastery, grace and charm, and rightfully became world champions following a face-off with strong rivals," read the statement.