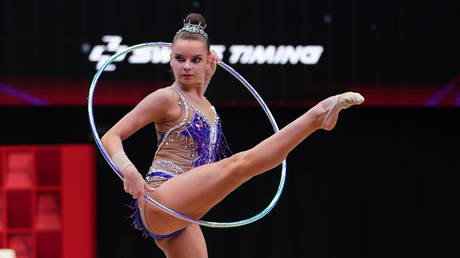 Russia’s rhythmic gymnastics stars will miss the Grand Prix stage in Kiev next month due to ongoing tensions with Ukraine, Russian official Irina Viner-Usmanova has said.

Kiev hosts an FIG Grand Prix stage also known as the ‘Deriugina Cup’ on March 14-15 at the Palace of Sports, but Russian stars such as the Averina sisters, Dina and Arina, are set to skip the showpiece because of military and political tensions.

“In connection with the current situation between Russia and Ukraine, of course [as things stand] the Russian team will not go to Kiev,” said the head of the Russian Rhythmic Gymnastics Federation, Viner-Usmanova.

The move has infuriated Ukraine and its Western allies, although Russia says it has taken the step to safeguard the local populations after widespread reports of shelling from Ukraine and other military activity.

The fallout from the geopolitical crisis has already filtered through to sport, with claims that Russia could be stripped of the 2022 UEFA Champions League final in St. Petersburg.

UEFA has said no decision has been made despite reports in the Western media that it is “likely” to take the step, while Russian officials say the matter has not been discussed.

READ MORE: Russia responds to claims it could be stripped of Champions League final