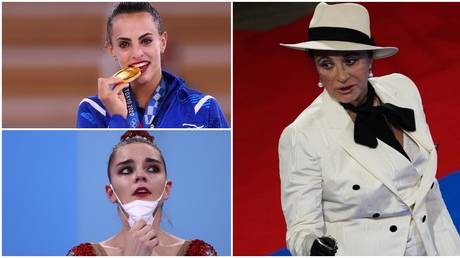 The president of Russia's Rhythmic Gymnastics Federation has reacted to Israel's withdrawal from the World Championships, insisting she isn't 'interested at all' that controversial gold medal winner Linoy Ashram won't feature.

Irina Viner-Usmanova claimed that Dina Averina, who finished second in Tokyo and received a silver medal, does not need to exact revenge on Ashram for her defeat at the 2020 Games as the world knows that her compatriot was the true winner of the rhythmic gymnastics event.

Ashram became the first Israeli woman to win Olympic gold and the first non-Russian winner of the all-round rhythmic gymnastics title since 1996 when she edged out Averina in Tokyo last month, despite dropping her ribbon in one routine.

Many Russians blasted "unfair judging" as handing Ashram the victory, but official protests were dismissed by the International Gymnastics Federation.

And while last week it was announced that Ashram will not participate at the World Championships in Japan next month, and later that Israel have pulled out altogether in a decision they is said to have nothing to do with the scandal, nobody should look to Viner-Usmanova for sympathy.

"I wasn’t interested at all," she said to Russian media when probed on Ashram's absence at the upcoming tournament.

"What kind of revenge are you talking about?" she asked, when perhaps reminded of what Averina has publicly revealed she seeks at Paris 2024.

"Dina Averina was the winner for me and almost the whole world."

"Linoy Ashram is not to blame for anything, but there were so many messages directed towards her that she even had to turn off Instagram," Viner-Usmanova added, in a nod to how the Israeli's account is now private after attacks from fans of Averina and Russian gymnastics, with the FIG condemning similar harassment the judges received that went as far as death threats.

"And our international activists, apparently, somehow influenced the fact that neither her exercises, nor those of Dina Averina, can now be viewed on the internet," she added.

Despite the controversy, matters have remained cordial between Ashram and Averina personally.

"I feel bad for Linoy. She didn’t do anything wrong. Stop poisoning her," Averina insisted to Championat.

"We’re not guilty of anything — it’s the judges’ business."

Ashram has also stressed she is not "mad" at her rival.

"Every athlete should take wins and losses with sportsmanship. There is no need to react to things incorrectly, but in the end, she did what she thought was right for her," Ashram remarked.