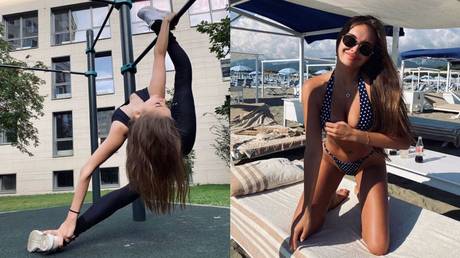 Olympic champion Sevastyanova, who was named the most beautiful female athlete at the 2012 London Games, posted bikini snaps from her vacation in northern Tuscany, Italy.

READ MORE: 'I could have starved for days': Russian gymnastics queen Alexandra Soldatova on battle with bulimia

The famed gymnast said that this was the “best time of the year” while sunbathing in a polka dot bikini at an Italian seaside resort.

In July Sevastyanova was widely discussed on social media after posing together with Ultimate Fighting Championship (UFC) star Conor McGregor at an event in Monaco.

Gymnastics ace Aleksandra Soldatova amazed her followers with her mind-blowing flexibility staging an impromptu training session at a sports ground.

The four-time world gold medallist showed went through an impressive outdoor workout even doing the splits on a pull-up bar.

“The feeling when you enjoy training is really priceless,” Soldatova captioned the pictures which gained more than 34,000 likes in two days.

The gymnast put her competitive career on hold last year due to serious health problems after she revealed that she has been struggling with the eating disorder bulimia for the past two seasons.