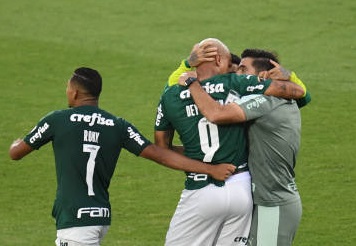 Abel Ferreira is champion of South America for the second year running after guiding Palmeiras to a 2-1 victory over Flamengo in the Copa Libertadores final in Montevideo.

Palmeiras defeated their Brazilian counterparts in extra time to lift the third cup trophy of Abel's tenure, while also securing a third straight triumph in the competition for Portuguese coaches following Jorge Jesus’ win in 2019.

The clash in the Uruguayan capital saw the last two winners of the competition meet, with Flamengo considered favourites despite Palmeiras being holders. Abel’s side, however, took the lead inside six minutes when Raphael Veiga finished a brilliant team move, only for Gabriel Barbosa to level the score in the second half on 72 minutes.

Extra time was required to separate the sides and Abel’s introduction of striker Deyverson for the additional thirty minutes emerged as crucial in deciding the outcome. The former Belenenses man robbed ex-Manchester United midfielder Andreas Pereira on the last line of the Flamengo defence and raced through to beat Diego Alves just five minutes after extra time began.

It proved the winning goal, which earned Palmeiras the third Copa Libertadores in the club’s history and saw the team from Sao Paulo become the first team to retain the trophy in twenty years. Speaking after the match, an emotional Abel Ferreira spoke about his ups and downs since arriving in Brazil just over a year ago.

“Above all, I’m grateful to be here to gain another medal,” he said. “I don’t forget the defeats we had against Flamengo (in the Supercup) or Defensa y Justicia (in the Recopa) because when you have known defeat, you know how to win. Our 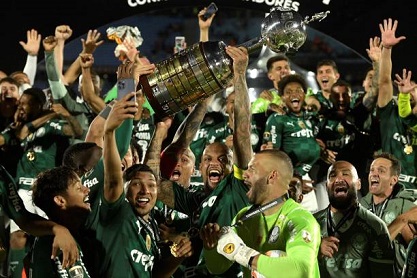 opponent is a great team, and they deserve congratulations, and they add value to our win. Congratulations to my players; a big hug of gratitude to them.

“To those who are working behind me [on the staff] I’m eternally grateful. I'm at a club that offers all the conditions to win. Fate brought us here. With my players, we made history. We're not always enough for the fans, but we always give our best.”

Despite his success in Brazil, Abel made some intriguing comments when asked about his future with Verdão. The former Sporting and Braga man has been linked with a return to Europe at various stages over the last few months, particularly given his family’s residence in Europe and Abel’s dissatisfaction with the demands placed on players in the country.

“I’m calm, at peace with myself and the sense of accomplishment. The way we play football is very intense. The way we play is not healthy for anyone. I must reflect on what I want for myself now and in the future. I’m grateful to Brazilian football and Palmeiras who opened the doors for me.

“There's a lot of room for us to improve in Brazilian football. I've already said I can’t perform at my maximum capacity and that the calendar is inhumane. I have to think very hard [about staying at Palmeiras]. I'm grateful, but I must reflect. It's inhumane what they do here in Brazil.

“I grew up used to doing more with less. I'm not one of the coaches who focus on problems, I find solutions. I do what I like with passion and joy, often tired. I'm at my mental limit. I need to take care of my physical and mental health."

Finally, Abel revealed that his journey of success in Brazil is to soon be documented in a publication. “When I arrived here, I asked if there were any books by Brazilian coaches. My technical team and I have been writing a book for a year, which should be out in January. It’s a way of thanking Brazilian football. I’ll answer a lot of questions in it.”