KYLIAN MBAPPE has fuelled speculation he will depart Paris Saint-Germain in the summer after confessing to Paul Pogba he is ‘fed up’.

The 23-year-old‘s future at Parc des Princes in uncertain with the 2018 World Cup winner set to to become a free agent at the end of the season.

Mbappe has been heavily linked with a switch to join Real Madrid following intense negotiations.

There have even been claims that his mother has demanded a £125million signing on fee from Los Blancos to secure her son’s services.

Despite the strong interest from Real, Mbappe put the transfer talk to the back of his mind in PSG’s Champions League last-16 tie against the LaLiga giants.

The former Monaco star scored in both legs, but Les Parisiens crashed out at the Bernabau after losing 3-2 on aggregate. 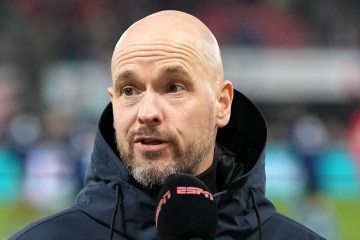 And talk of his future popped up as he arrived for international duty for France.

Footage shared by FFF TV shows him greeting Paul Pogba, with subtitles stating the Manchester United midfielder asked him how is it going at PSG.

To which Mbappe replied: “I’m a little fed up.”

PSG remain desperate to keep hold of Mbappe, with the club claimed to have offered him an £800,000-a-week contract earlier this month.

Most read in football

Speaking prior to PSG’s Champions League exit, sporting director Leonardo spoke of his optimism that Mbappe could extend his stay.

He told L’Equipe: “I cannot say precisely what the chances are that Mbappé extends but we have possibilities.

“So long as there is no signature (with another club), we will try everything. We will do everything to keep Kylian.

“The last thing we will put on his contract will be the salary amount.

“We want to put Kylian in the best conditions to become the best player possible.”

Mbappe has once again been in inspired form this campaign – chipping in with 26 goals and 17 assists in 37 games in all competitions.