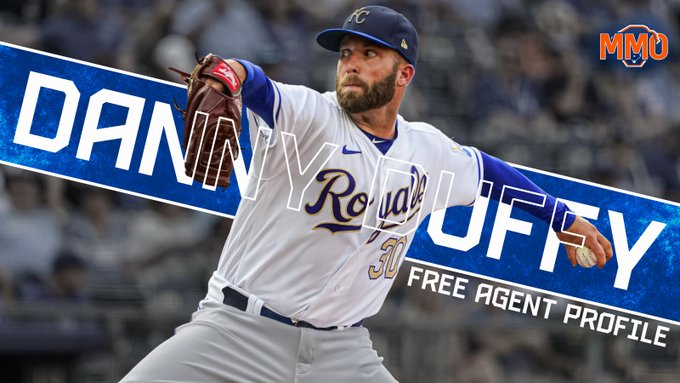 Danny Duffy was drafted by the Kansas City Royals in the third round of the 2007 MLB Draft out of Cabrillo High School in California. He started his time in the organization on a high note, pitching to a 1.45 ERA in rookie ball.

Early on in 2010, Duffy decided to step up from baseball for “private matters.” It later came out that Duffy was dealing with bullying in the clubhouse and was later diagnosed with depression, anxiety, and a panic disorder.

He returned to the team and put together a spectacular season over three levels of the organization. Duffy started the 2011 season in Triple-A but was ultimately called up in late May to make his big league debut.

Duffy took the no-decision after allowing two runs over four innings and striking out four against the Texas Rangers. He stuck with the big league team but struggled to the tune of a 5.64 ERA his rookie campaign.

Duffy remained a key figure in the Royals rotation over the next ten seasons. He made six starts in 2012 before he suffered a torn UCL in his left elbow and was forced to undergo Tommy John surgery.

He returned to the team in August of 2013 and went on to make five starts the rest of the season. He pitched pretty well over that small sample size and was riding high into the next season.

Duffy made 24 starts in 2015 and pitched well again, but was moved to the bullpen in September. He made six appearances in the postseason pitching out of the bullpen and struck out nine batters.

Duffy remained a consistent starter in the Royals rotation making 20+ starts over each of the next three seasons. He had some struggles with his command which led to a bloated ERA in both 2018 and 2019. Duffy recorded a 10.1% and 8.3% walk rate each season, respectively.

This past season, Duffy got off to the best start of his career. For the first two months of the season, he was arguably the Royals’ best starter. The lefty allowed just three runs (0.39 ERA) and struck out 27 batters over his first four starts of the season.

He made three starts in June before landing on the injured list with a flexor strain in his left forearm. Duffy returned the mound towards the end of June, but was never able to return to form.

His first outing back he went just two innings and threw 42 pitches. Two days later he surprisingly made a one-inning appearance out of the bullpen. He went on to make four more appearances, a total of 16.1 innings, before landing back on the injured list.

Hoping for a potential late-season return, the Dodgers traded a player to be named later for Duffy at the trading deadline. However, the southpaw suffered a setback while rehabbing, and never made it back to a big-league mound.

All was rather quiet on the injury-front for Duffy towards the end of the season. Finally, in the middle of the offseason, he revealed that he had undergone surgery to fix his flexor tendon in late October.

While he’ll still face a long recovery, Duffy was pumped to have avoided his second Tommy John surgery. The left-hander plans on starting throwing in March and expects to be ready to pitch again by June.

This will certainly play a factor in the type of contract Duffy receives this offseason. MLB Trade Rumors projects him to take home a one-year deal, worth around $10 million. It’s certainly possible a team could also try to pull him in on a backloaded two-year deal.

Duffy said when he eventually returns, he expects to pitch out of the bullpen for the remainder of this season, but he should be full-go to handle a starter’s workload for years to come.

Duffy could be an intriguing option for the Mets to consider. Obviously, they’d need to bring in another starter as well, but Duffy could be a solid lefty option out of the bullpen this season and then join the rotation the next.

There’s no reason to believe Duffy won’t make a full recovery from his surgery. He’s expecting to link back and rehab with the physical therapist who helped him on his road back from his Tommy John surgery.

When he returned from that, he put together one of the best seasons of his big-league career and made 31 appearances (25 starts). Prior to the injury, Duffy was also throwing the hardest he’s thrown since 2018 and saw an uptick in his strike-out rate.

While Duffy is certainly a serviceable back of the rotation arm when healthy, I’d prefer the Mets look elsewhere to start. The southpaw wouldn’t be a bad fallback option, but the Mets need healthy depth arms not even more question marks.