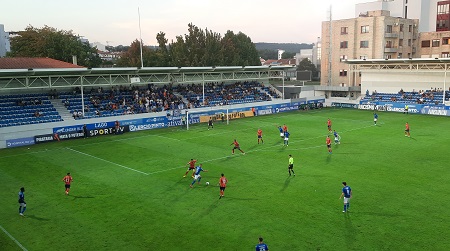 Feirense overturned a 2-0 deficit to beat Oliveirense 3-2 in a game to remember in Santa Maria da Feira, earning their first home win of the season.

Michel Lima opened the scoring in the first half before Duarte Duarte extended Oliveirense’s lead in the 58th minute.

Feirense took advantage of two mistakes from Ricardo Ribeiro to get back into the contest, the goalkeeper failing to stop João Paulo’s low drive and paling the ball to Oche Ochowechi who equalised.

The hosts completed the comeback in added time, João Paredes taking advantage of a howler from Mohammed Lamine to slam the ball home off the underside of the bar.

It was an open and attacking game with Oliveirense taking the lead in the 17th minute. Lessinho’s shot hit the post, the ball rebounding into the path of Michel Lima who headed home.

Feirense pressed for an equaliser, Jardel heading Manu’s cross over the bar and Fábio Espinho firing into the side netting.

Oche Ochowechi had been lively throughout, the Nigerian winger forcing a save from Ricardo Ribeiro in the 49th minute.

Oliveirense were holding firm and extended their lead in the 58th minute. Iago Reis got to the byline and cut the ball back to Duarte Duarte, his shot saved before the ball rebounded straight back into him and into the net.

Feirense had nothing to lose and got back into the game with some assistance in the 65th minute. João Paulo tried his luck from distance, his low drive catching Ribeiro half asleep with the ball bouncing into the net.

The hosts were well and truly on top, Jardel Silva’s shot deflected wide and Espinho’s free kick clawed off the line by Ribeiro. They duly equalised after a great team move and more help from Ribeiro, Samuel Teles’ shot palmed away by the keeper into the path of Ochowechi who converted from close range.

Ribeiro showed he had some skills by producing a spectacular save to deny Paredes before seven minutes of added time were awarded.

Four minutes in and Feirense had completed their comeback, largely due to a horror pass from Mohammed Lamine. The substitute played the ball towards his goal inside the 18-yard box, Paredes pouncing and powering the ball into the net off the underside of the crossbar.

The game ended with ugly scenes with Washington booked for a bad foul, Filipe Alves sent off for his reaction and an all im brawl after the final whistle.

It was an important win for Rui Ferreira’s side overturning a 2-0 deficit to secure their first home win after three consecutive draws at Estádio Marcolino de Castro. 20-year-old Nigerian wing-back Oche Ochowechi was an easy choice for man of the match.

Ferreira will be praying the victory kick starts his side into gear before their trip to Varzim in the Taça de Portugal.

Oliveirense manager Fábio Pereira won’t be pleased with his side giving up a 2-0 lead against their local rivals. They were nervous in the closing stages, epitomised by Lamine’s moment of madness in added time.

The promoted club continue their struggles on the road in the Segunda Division, now losing 11 of their previous 12 away games stretching back to 2020/21 when they finished bottom of the table.