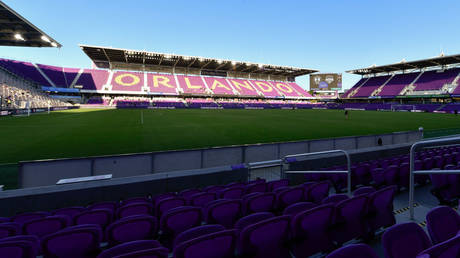 National Women's Soccer League (NWSL) franchise Orlando Pride have issued an apology after allegedly telling a supporters' group that they could not display a banner in their stadium containing the word 'gay' during a home match at the weekend.

The Black Swans Drinking Club wanted to put the banner up as a response to recent legislation which has been dubbed the 'Don't Say Gay' bill, and took to Twitter to explain how the Pride had told them the sign was political and had to be taken down when the team drew 0-0 against the Washington Pride in the Challenge Cup on Saturday.

The NWSL announced it would meet with the Black Swans to determine what happened, and the Pride stated on Tuesday that the conversations had concluded the order was a mistake.

The Pride released a joint statement with the Black Swans and, after talks not just with the group but also other "supporters, players, front office and team staff as well as community leaders in LGBTQIA+ activism", realized that it had "wrongly focused on signage polices and procedures, instead of allowing the important meaning of this message."

Joint Statement from the Orlando Pride and @BlackSwansDC.

"Our city is no stranger to the dangers that come from hateful rhetoric and intolerance," the Pride continued, referring to the 2016 Pulse nightclub shooting.

"We oppose the Florida legislation which promotes ostracization and discrimination of LGBTQ+ students in our schools and their families."

"As a result, supporters were especially dismayed by the club's decision not to allow the banner."

"It is a privilege and duty to create a safe, inclusive environment at Orlando Pride matches, and the club deeply apologizes for violating that trust through this incorrect decision

"Moving forward, the Black Swans have approval to hang the banner at Pride home matches if they wish to do so."

The Pride's actions at the weekend may have surprised some given that it has long championed LGBTQ+ rights, with 49 seats at its Exploria stadium being rainbow-colored in order to honor the victims of the nightclub tragedy.

Last month, the Pride and its Major League Soccer affiliate, Orlando City, criticized the legislation before it went to Governor Ron DeSantis in a separate statement.

The supposed 'Don't Say Gay' bill prevents schools in Florida from teaching young children about topics such as sexual orientation and gender identity.