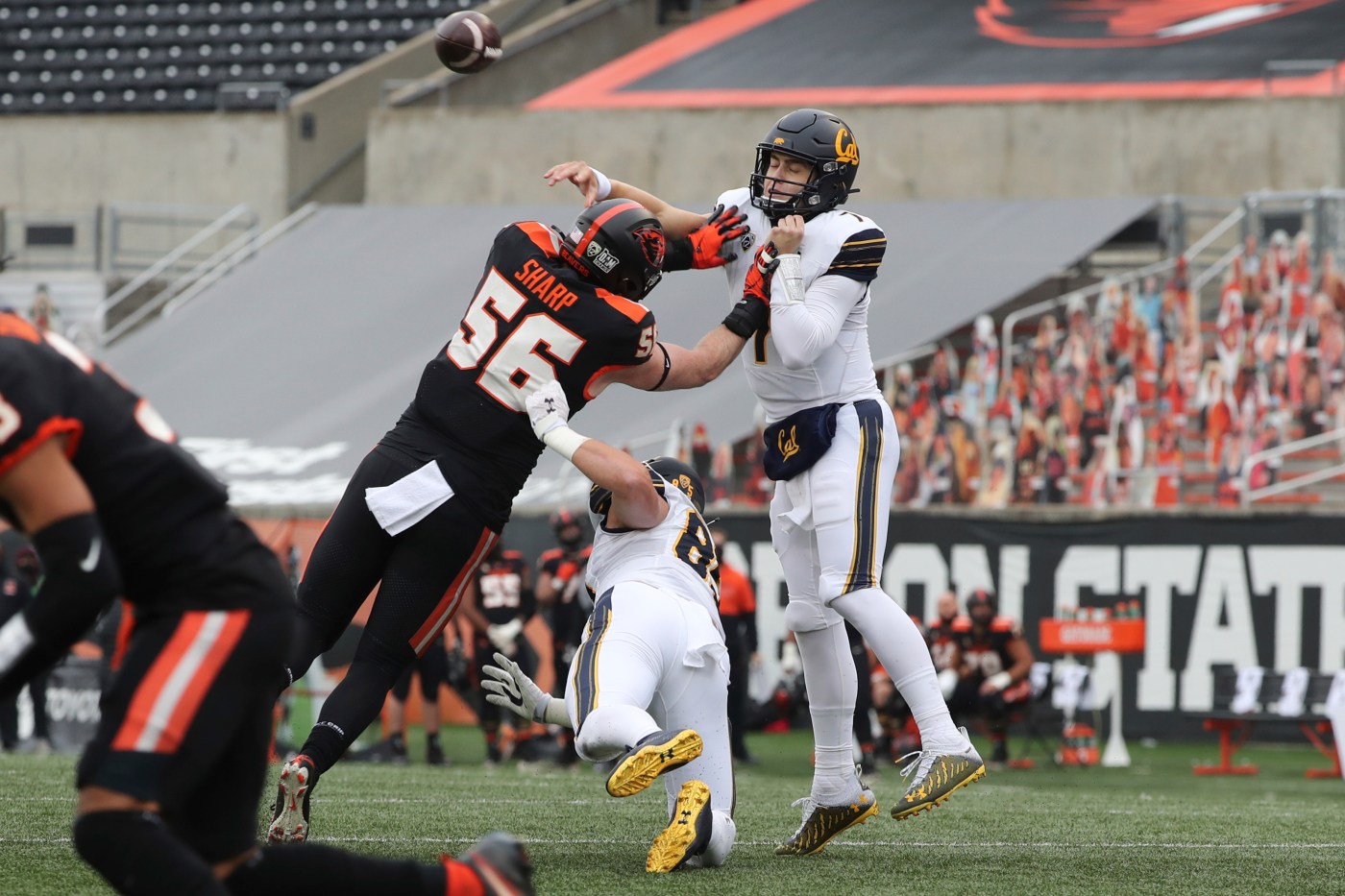 The big picture math for the Cal football team looks like this: Two games canceled, two games lost, two players with COVID-19 and an unknown number of their teammates put in quarantine as a result.

The Bears fell to 0-2 on Saturday, losing 31-27 to Oregon State in a game that featured three lead changes in the fourth quarter and a barrage of pregame bad news for the visitors.

Cal announced beforehand that three starting offensive linemen — seniors Jake Curhan and Valentino Daltoso and sophomore Will Craig — were out due to COVID-19 issues. One of them had tested positive and the others were shelved after contact tracing protocols.

A fourth starting lineman — center Michael Saffell — went down with a leg or foot injury in the second quarter and did not return. The Bears also played without three other starters — running back Christopher Brown Jr., tight end Collin Moore and linebacker Braxten Croteau — along with freshman nose guard Stanley McKenzie. They were ruled out within an hour of kickoff, for reasons undisclosed.

Two weeks earlier, Cal had one defensive lineman test positive, and that landed the entire position group in quarantine, which caused the season opener against Washington to be canceled. And when Arizona State had to cancel last week, the Bears rushed to Pasadena to play UCLA, only to lose 34-10.

In this one, the Bears were positioned to win at the finish. But Chase Garbers, who had passed for 315 yards and three touchdowns, had his first-down pass from the OSU 10-yard line tipped into the air and intercepted by linebacker John McCartan with 58 seconds left.

“It’s a very frustrating loss,” Cal coach Justin Wilcox said. “It’s frustrating for everyone. There were parts of the game when we did some things pretty well. Unfortunately, the critical errors in every phase were too much to overcome.”

Here are takeaways from this one as Cal heads into Big Game week, with a pair of winless rivals set to play at Memorial Stadium the day after Thanksgiving:

Wilcox said he learned Friday morning that the three linemen would be unavailable and it seems doubtful any of them would be cleared to play in the Big Game, given the usual 10-to-14 day isolation requirement.

The replacements for the starters were two redshirt freshmen and two sophomores. The entire offense clicked in the first half, piling up 20 points and 317 yards, but Cal scored just once more in the second half..

Asked about the young linemen, Wilcox said, “I don’t feel like they were the reason that we . . . they could have done better, I’m sure, but I thought they competed really hard.”

— Penalties wiped out an 89-yard punt return for a touchdown by Nikko Remigio and a 94-yard kickoff return by Remigio that would have set Cal up at the 3-yard line.

— A blocked punt with 5:26 left that gave the Beavers the ball at the Cal 14 and led to quarterback Tristan Gebbia’s 1-yard sneak for the go-ahead touchdown with 4:30 remaining.

— Newcom punter Jamieson Sheahan had a 24-yard punt that gave OSU the ball at Cal’s 35-yard, and Gebbia threw a touchdown pass from there for a 14-6 lead late in the first quarter. Then Travon Bradford returned a Cal punt 36 yards to the Bears’ 39, setting up a touchdown that put OSU in front 24-20 early in the fourth.

After also noting a delay of game penalty before a punt and a muffed return the Bears recovered, Wilcox said, “Those are critical, critical errors. It’s hard to overcome one of those, let alone six or seven. We’ve got to be a lot better on those.”

Seeing red in the red zone

Cal was much improved offensively over a week ago, but the Bears left points on the field. They settled for a field goal late in the first quarter after reaching the 9-yard line, and came away with nothing after trying to convert a fourth-and-goal from the 2 midway through the second.

“We had a chance for more scores down in the red zone in the first half, which would have really felt great,” Wilcox said. “Didn’t quite get those in the end zone.”