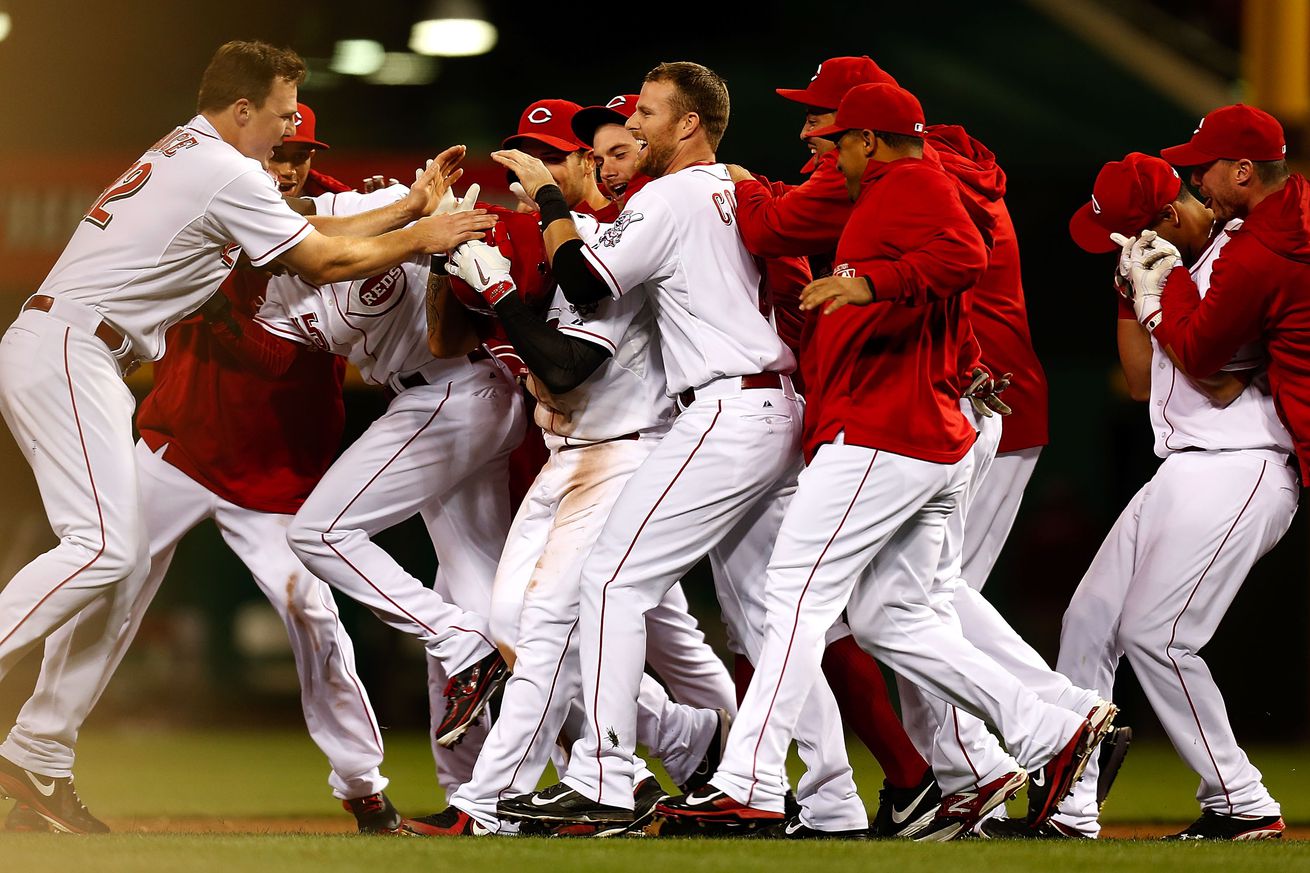 10 games for a shot at the marbles.

The photo up top will be seven years old in exactly a week. The walk-off celebration that day featured Shin-Soo Choo being mobbed after his game-winning double against the New York Mets, the scrum featuring the likes of Jay Bruce, Zack Cozart, Chris Heisey, Billy Hamilton, Tony Cingrani, and Xavier Paul.

Names from a bygone era, really, with only Bruce, Choo, and Hamilton still in the big leagues this year.

Those Cincinnati Reds had their perennial MVP candidate in Joey Votto signed and extended. They’d won a pair of NL Central titles in the previous three seasons, doing so with a name-brand manager in Dusty Baker that lent credence to their legitimacy. Johnny Cueto was a bona fide ace, Homer Bailey had spun no-hitters, and nobody on the planet threw a baseball harder than closer Aroldis Chapman.

It was a good time to be a Reds fan. If you’re, say, 32 years of age or younger, it was the single best run of form your waking eyes have been able to process. That September day marked the Reds 90th win of the 2013 season, and things appeared to be riding high in the Queen City.

Reds fans know all too well what came next, however. While just two games out of the division lead upon awaking that next day, the club collapsed completely, losing the next pair of games against the Mets before being swept at the hands of the Pittsburgh Pirates to wrap their regular season slate. It was a collapse that sunk the Reds into being the road team in the one-game Wild Card, one in which they again fell flat at the hands of the Pirates.

Baker was soon asked to make changes to his coaching staff following the stretch-stumble, and refused. He was let go, the Reds turned to pitching coach Bryan Price to take over, and the collapse merely gained steam. Votto’s leg gave out. Homer’s arm fell apart. Ryan Ludwick’s shoulder gave way. The 2014 Reds slipped down and out of relevance, and did so rapidly enough to see the need for a complete and thorough rebuild, one that to this day feels like a bail bondsman lurking over the team’s shoulder.

The 2020 Cincinnati Reds were supposed to the club that put an end to that chapter. The high-priced free agents were to bring winning to a club that had begun to turn the corner with its new core, with manager David Bell and a front office commitment to analytics helping mold them into a playoff-bound menace, one no longer set to be the first stepping stone on the standings for all other clubs.

With 10 games left in this odd, complicated year, the Reds sit at 24-26, in 3rd place in the NL Central, and without claim to one of the expanded playoff spots this postseason will host. Yet here I am, hawking this piece with a tone that I swear is about to be optimistic.

Tonight’s game against the Pirates - the final one between these two division rivals this year - has a chance to be something of an exorcism. Up against the very franchise that churned the key uppercut that fell the previous decent era of Reds baseball, the Reds have a chance to sock back, sweep a 4-game series, and ride into a final trio of series against some of the best clubs in the game with a chance at the playoffs in the control of their own hands.

The next 10 games are effectively playoff games. The Reds must win the bulk of these to advance, which is what the playoffs are by nature. And it’s been a long, arduous seven years where the idea of the Reds having a 10 game stretch that truly meant something was about as off the menu as you could get.

There’s something underdog-y about it all, too. The Reds, while playing their best baseball of the year, aren’t exactly churning on all cylinders. Their resident ace, Sonny Gray, is on the 10-day IL, and who knows when he’ll be back. Nick Senzel has been sidelined for over a month with [insert 2020 mystery illness designation in the midst of a pandemic], while Jesse Winker has been fighting a balky back. Mike Moustakas has been a ding-machine all year, with thighs and feet and forearms getting beat all to hell when he’s not been mashing right back. Even Eugenio Suarez, who’ll be back by Friday, is away from the club on the paternity list, meaning the Reds are truly having to shuffle in new faces in new places daily while trying to claw their way back into the race.

They’ve done that. These Reds are just a half-game back of a guaranteed division playoff spot, as well as a half-game back in the Wild Card race. They’ve got 10 games left with multiple avenues that lead them to the postseason again, and the only way they get there is with the exact opposite momentum they landed there the last time, when they tripped, fell, and slid into the playoffs back in 2013.

We’ve got the most watchable Reds baseball in years coming up. They may fall flat, they may go out in epic fashion reserved for only the most Cincinnati of sports, or they may just storm their way in with emphasis. Either way, we’ve finally, mercifully got the Reds playing meaningful baseball as the leaves begin to turn yellow.