Darlow, 31, could go out on loan if Newcastle sign another keeper, with Brighton’s Robert Sanchez top of their hitlist.

Eddie Howe is eager to completely overhaul his squad this summer, but in order to abide by the Financial Fair Play rules the club will have to get rid of some current players.

As SunSport revealed last week, the Magpies could axe up to ten stars in the next transfer window to make way for new additions.

And Darlow is one of the names on the list.

The out-of-favour goalkeeper has only made eight appearances this season. 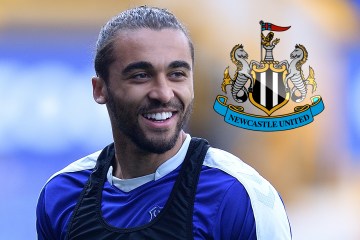 GIVE ME A CAL

Martin Dubravka has established himself as Newcastle’s first choice.

Ciaran Clark, Isaac Hayden, Matt Ritchie and Dwight Gayle are also on the list of expected departures having barely played this season.

Club chiefs are expected to be open to offers for captain Jamaal Lascelles as Howe is on the hunt for another centre back.

The same can be said for Miguel Almiron.

It is understood that star man Allan Saint-Maximin could be moved on to give the budget a huge boost.

He is expected to be sold for a fee in the region of £40-50million.

The Magpies have been linked with a host of players ahead of the summer transfer window.

Everton striker Dominic Calvert-Lewin is on the list of targets, along with Manchester United midfielder Jesse Lingard.