DARTS stars Adrian Lewis and Gerwyn Price needed to be separated as tempers threatened to boil over at the Czech Open.

Lewis had pulled off a comeback to win 6-3 and reach the last 16 after Price blew a 3-1 lead but Lewis later claimed he was a called a “fat something” as the pair clashed on stage.

Tempers flare between Gerwyn Price and Adrian Lewis in Prague

The victor attempted a post-match hug only to be rejected by Price.

Some heated words were exchanged by both players, prompting referee Russ Bray to intervene.

After the match, Lewis said: “I don’t know what that was about at the end but he had a go at me for some reason, calling me ‘fat something’.

“He obviously doesn’t realise I’m an athlete, that’s where he’s gone wrong there!” 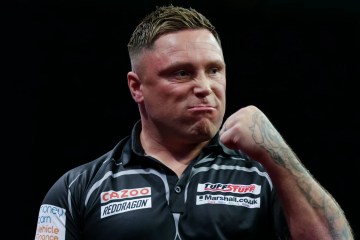 It was only last month Price knocked his debut charity boxing bout on the head after sustaining an injury.

The Iceman in March fractured his throwing hand – he insists it was not in sparring – which badly affected his darts on the Premier League circuit.

The world No2 was supposed to fight on May 13 in Wales to raise money for a hospice close to his family’s hearts but he has now quit the show.

Price, 37, said: “The injury is a long story but I didn’t do it in boxing as people think.

“I have pulled out of the boxing now. I have had medical advice not to do it.

“That was probably on the back of my mind when I was training as well as doing darts. I thought I could mix both.

“That probably hindered my game a little bit as well. Boxing is behind me. Just darts from now on.”