MANCHESTER UNITED lost 1-0 to Aston Villa at Old Trafford as the game ended in frantic fashion.

Cristiano Ronaldo was a victim of his team-mates’ lacklustre performances as England stars Harry Maguire and Luke Shaw looked shaky before they both came off injured.

United looked semi-threatening before half-time with Mason Greenwood, Bruno Fernandes and Ronaldo having the best chances.

But it was just not clicking for the home side who looked sloppy all over the pitch and let Villa in for a couple of big chances of their own.

The second-half was even worse as United seemed to regress.

And it went from bad to worse as Kortney Hause rose to head the Villans 1-0 up on 88 minutes to inflict United’s second consecutive home defeat.

Edinson Cavani lost Hause at the corner but redeemed himself by heading the ball onto the defender’s hand to win United a penalty in stoppage time only for Bruno Fernandes to blaze it over the bar.

Dealt well with Maguire’s awful backpass to keep it at 0-0 after he was hung out to dry by the defender’s ball.

Gave the captain an earful straight after.

Wasn’t regularly troubled but produced a solid stop 25 minutes into the second-half from Ollie Watkins.

Beaten at his near post for Hause’s winner but harsh to criticise him.

Lost his man and let Ezri Konsa get on the end of a corner in the late stages of the first half. Was lucky the Villa defender headed over the bar.

Did his primary job of defending well enough as Villa failed to score.

But De Gea seemed hesitant about passing to him as he offered little going forward.

Didn’t have a great deal to do.

Focus was on his centre-back partner’s shaky performance as Maguire had an off day.

Dodgy backpass put his side under pressure 25 minutes in and was lucky to be bailed out by De Gea.

Forced a good save from Emi Martinez with a powerful header on 42 minutes.

Went down with a calf issue ten minutes into the second-half but battled on – seemingly foolishly.

Looked miles off the pace straight after and was inexplicably left on by Ole Gunnar Solskjaer for another ten minutes.

Out of position twice in the build up to a huge chance for Matt Targett in the first-half.

Booked for a challenge on Matty Cash on the half-hour mark.

Was subbed on 33 minutes after a blow to the face but was also limping as he made his way straight down the tunnel.

High-energy performance from the off.

Nothing sloppy, broke play up well, tried to spring counter-attacks.

Professional performance. Booked for hauling down John McGinn with 13 minutes of normal time to go.

Did the business in front of the back line and limited the visitors to very few chances.

Looked lively in the early stages but repeatedly made the wrong decision.

Could have played Fernandes in for a certain goal after 18 minutes but chose to shoot which was easily saved by Martinez.

Broke through for a half chance just past the hour mark but produced another weak effort that was easily saved.

Fluffed an early chance on the half-volley.

Cut a frustrated figure in the first-half as he got into good positions but was repeatedly ignored by his team-mates.

Almost invisible after the break and capped off his afternoon by blazing his 93rd minute penalty over the bar.

Struggled to impact the game before the break but linked up well with his team-mates and didn’t stop trying to make things happen.

Headed a whisker wide on the stroke of half-time from a Fernandes corner.

Positional play was good throughout but failed to worry Martinez as often as he could have as United’s fans were looking to him to produce something out of nothing.

Lined up for a trademark shot from distance early doors but dragged it wide.

Quietest afternoon since re-joining the club but was forced to feed off scraps as the attacking trio behind him struggled to get going.

Nothing spectacular. Defended well but didn’t offer much going forward.

Earned his money. Certainly more solid than the man he replaced. 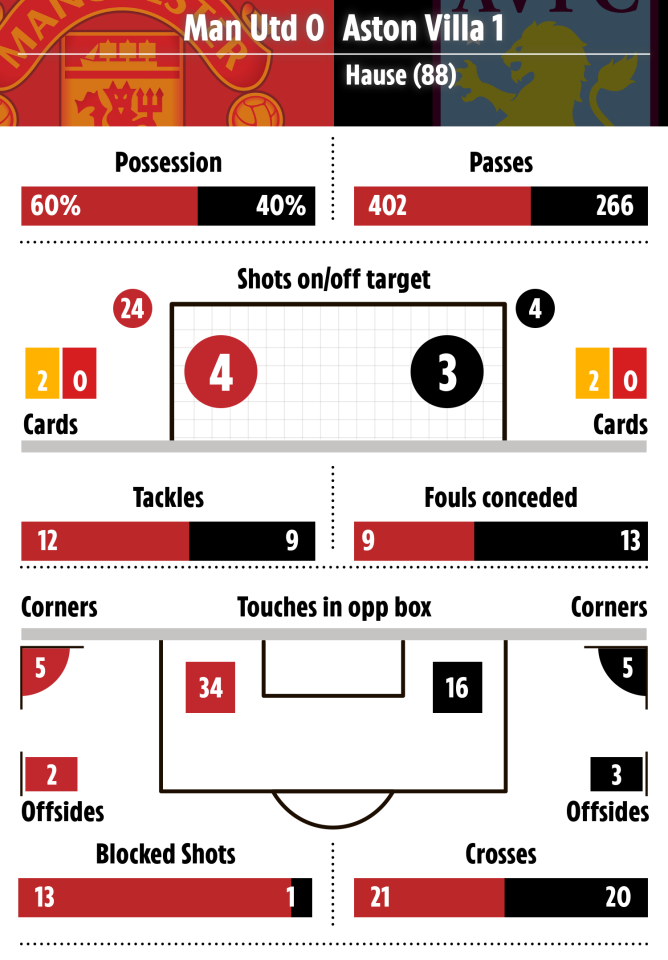 What a rollercoaster introduction.

Lost Hause at the corner that the defender scored from.

Then headed onto Hause’s hand to win a penalty just minutes later but Fernandes let him down with the miss.

Sir Alex Ferguson and Gareth Southgate were both present at Old Trafford[/caption] The England manager watched on with Scotland boss Steve Clarke[/caption]
Загрузка...