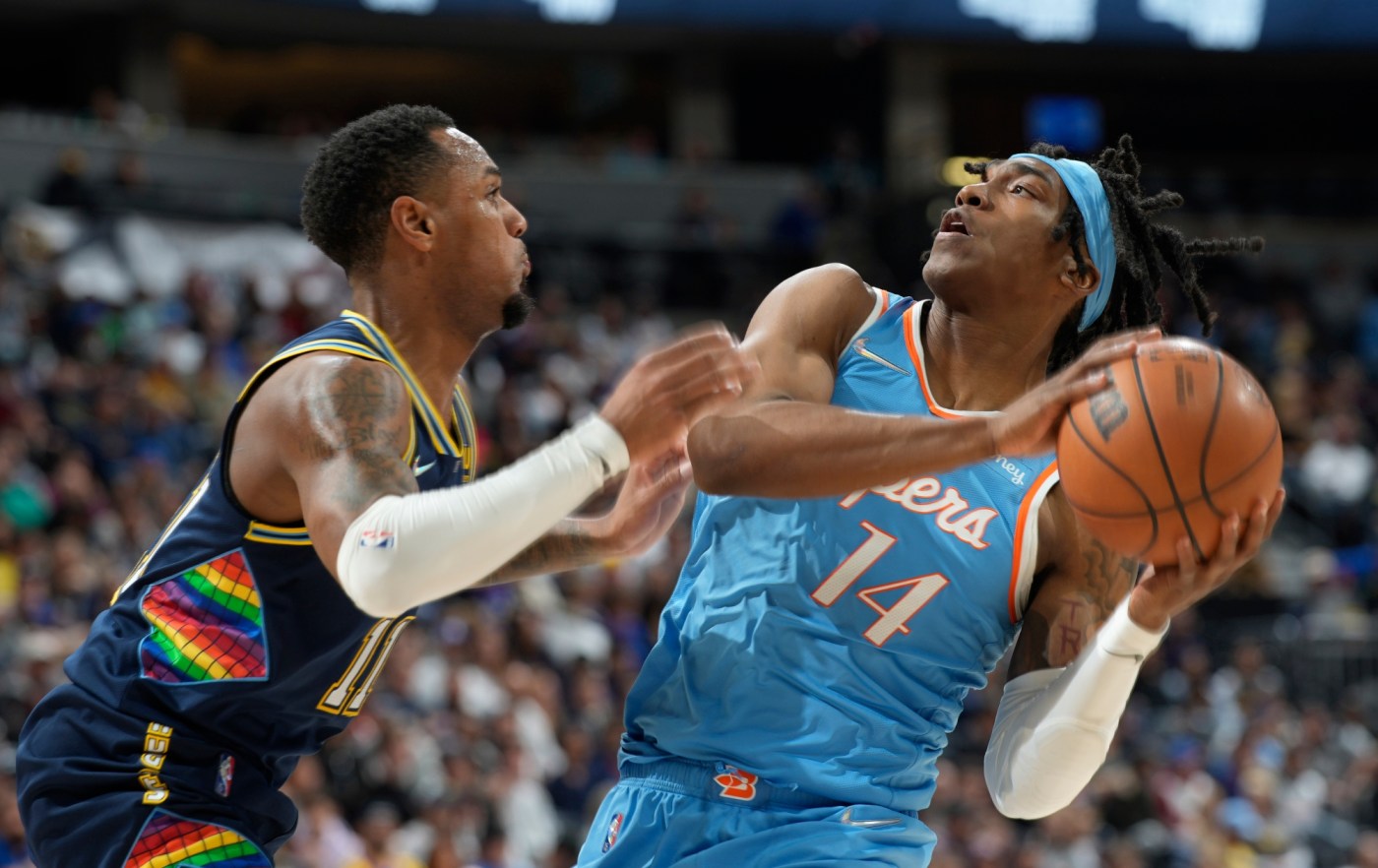 With an effective, frenetic effort, Terance Mann helped keep his side close enough that it seemed, for a fleeting moment, as though they might avoid the first four-game losing streak of his NBA career.

But in the end on Tuesday night, Denver’s Nikola Jokic and the shooters surrounding him were too hot, carving up the Clippers with well-timed 3-pointers from the corners for a 127-115 victory in front of a crowd of 16,089 at Ball Arena in Denver.

It was the largest margin of victory by either side in their four meetings, the previous three of which were decided by a combined five points.

It seemed the teams were headed for yet another nail-biter when Robert Covington capped a 14-4 Clippers’ surge with a 3-pointer that brought them within 111-109 with 4:27 to play. But when he skied for an athletic block on Aaron Gordon at the rim, Gordon saved the ball from beneath the backboard and got a pass into Monte Morris’ hands for one of Denver’s four fourth-quarter corner 3-pointers.

That stopped the bleeding and set Lue’s team back by five points with 4:03 left.

Jeff Green hit from the same corner 30 seconds later to extend the advantage to 117-109 and the Nuggets didn’t look back.

With the victory, Denver improved to 43-30 and snapped a three-game home losing skid. The Clippers, meanwhile, lost a fourth consecutive game for the first time since a five-game skid in January 2019. They have lost seven of their past nine.

Afterward, they brushed off the loss in what likely could have been a play-in game preview, heartened by their 27 assists and six turnovers and by the fact that they’d allowed Denver to corral only six offensive rebounds – tied for the fewest by any Clippers opponent this season.

Also, the Clippers noted that, with the eighth seed all but secured and just eight games left in the regular season, it had been a night for experimentation.

“I won’t say, but we found a few things we can work on and hopefully bring it out either in the play-in game or the playoffs,” said Mann, the versatile third-year wing who came off the bench to score 24 points on 7-of-10 shooting and also hit a career-high 10 free throws in 12 attempts.

“Yeah,” Clippers coach Tyronn Lue said, via Zoom. “We wanted to try some different things out and just kind of see what works and how we can attack them, and we found some things tonight that we can do and just some different lineups, getting our small-ball lineup together because we really haven’t had a chance to really have Marcus (Morris Sr.), Nico (Batum) and RoCo on the floor together. So we got a chance to work on some things, experiment going into the last eight games of the season.”

The Nuggets have nine games left and currently occupy the sixth seed in the Western Conference standings, although they’re jockeying for that spot with the seventh-seeded Minnesota Timberwolves.

The Clippers (36-38) are anticipating facing whichever of those teams finishes seventh in the play-in. L.A. is also looking forward to possible some reinforcements before then, with both Paul George (elbow) and Norman Powell (foot) progressing in their respective recoveries.

“Yeah, I think we know what the future holds,” added Mann, who had eight rebounds, a blocked shot, four assists and no turnovers – bringing his tally to 21 assists and four turnovers over his past six games.

“Just happy about it. We got guys coming back, we got guys in good places, so, even though it’s a four-game losing streak, we got to learn from it and, yeah, keep going.”

A game after he’d recorded a relatively mortal 23 points on 8-for-23 shooting, eight rebounds and four assists in a loss to Boston, Jokic was typically dominant Tuesday. The NBA’s reigning MVP led seven Nuggets in double figures with a game-high 30 points on 9-for-15 shooting. He was also 12 for 13 from the free-throw line and added 14 rebounds, six assists, three blocks and two steals.

Despite all that, a 7-1 Clippers run cut it to 90-82 with 2:20 left in the third quarter – though they found themselves trailing still by 11 points – 99-88 – entering the final period, the same deficit by which they’d been behind at halftime.

A 5-0 spurt to start the fourth cut it closer, to 99-93. But again, the Nuggets responded, outscoring their guests 8-2 and forcing Lue to call a timeout following Bones Hyland’s 30-foot 3-pointer.

The Clippers counterpunched with a quick five points to bring themselves within 107-100, down seven with about seven minutes to play.

Covington’s big 3-pointer – which came after he jammed his left hand while knocking a ball out of bounds: “Ain’t nothing I’m too much worried about,” he said – eventually cut it to two, but Denver outscored the Clippers 16-6 to close.

“I mean, four-game losing streak, I don’t want to say, ‘So what,’” Mann said. “I mean, losing sucks. But this group of guys had a long year – not giving any excuses – but we had a long year, lot going on, a lot of different lineups, a lot of guys in and out, so kudos to everybody for just playing hard and sticking through it.

“The morale is still high in the locker room, guys still feel like we can win, so that’s not gonna deter us from trying to win all these games coming up.”

It was the first time the Clippers faced DeMarcus Cousins – a part of their first Western Conference finals team last season – since he joined the Nuggets in late January, coming aboard initially on 10-day contracts before signing for the rest of the season – similar to how his stay in L.A. played out last season.

On Tuesday, Cousins said hello again with eight points and five rebounds in 14 points – and one of the double technical fouls assessed in the first half to him and Clippers assistant Dahntay Jones.

Synchronized Swimming
22 Feb 2022 14:57Aquabatix
Body doubles for Gala Bingo Commercial
Modern pentathlon
22 Dec 2021 17:51ThisIsinsider.com
Modern pentathlon tore itself apart and alienated its biggest stars to try to stay in the Olympics. It's probably getting kicked out anyway.
Cross-country skiing
23 Mar 2022 09:01ThisIsinsider.com
We visited 2 of the world's most expensive ski towns and found they're both wildly luxurious — but in totally different ways
Sailing
18 Mar 2022 08:00Times of Malta
Yachting Malta EurILCA Master Series this weekend