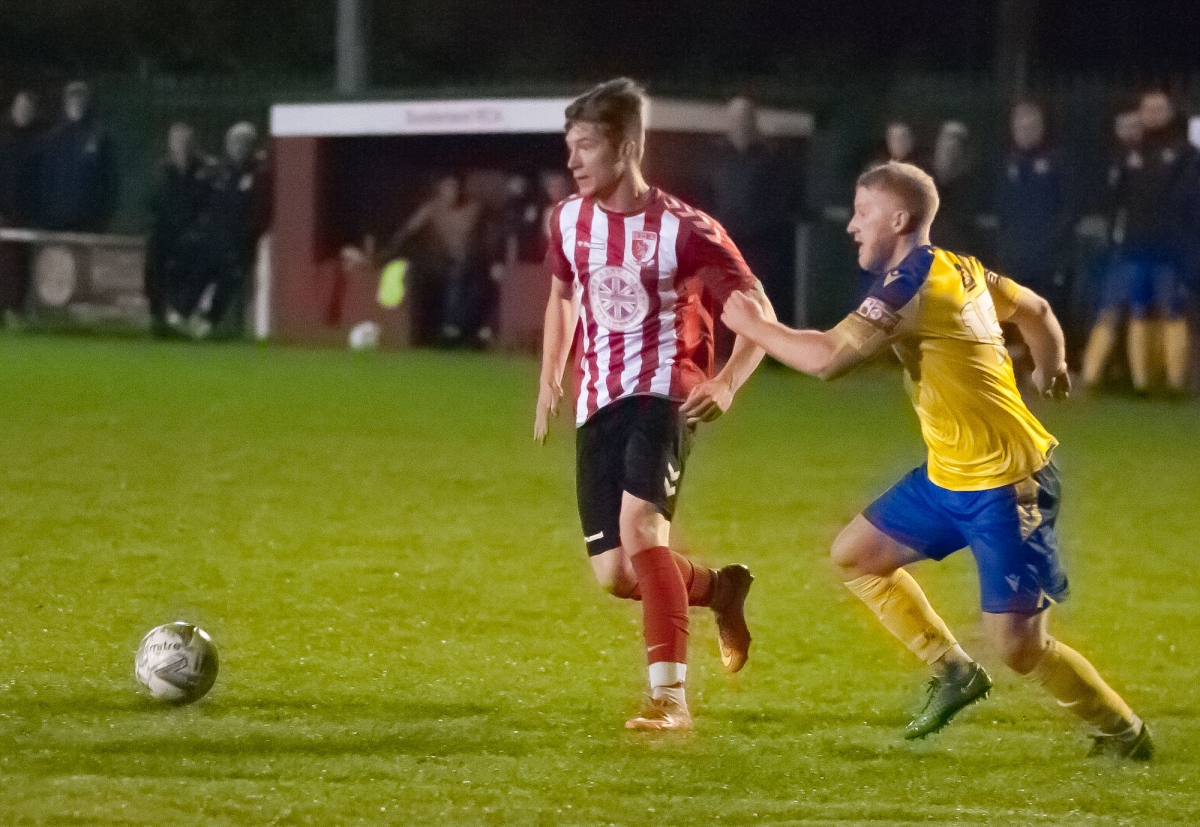 Robert Ene looks for a consolation goal late in the match.

Tonight we welcomed our visitors Stockton Town to Sunderland LGV Park for this 2nd round Durham Challenge Cup match. Our visitors are enjoying a superb season in the Northern Premier League East Division where they top the table.

Once again the ground staff at RCA prepared a fantastic playing surface for tonight’s match.

The Management team made wholesale changes to the team bringing in Ezard, Lawrence, Moan and Annang-Colquhoun to replace Marrs, Charlton, Morris and Patton.

The teams lined up as follows:

The match kicked off with RCA kicking towards the cemetery end of the ground and they were soon put under pressure by a well organised Stockton outfit.

A controlled passing move across the midfield released Hayes who out ran the RCA defence before crossing into the box where Beddon met the ball with a powerful header which went straight to Ezard in the RCA goal.

The constant early pressure eventually paid off for Stockton, a partially cleared corner fell to Hayes on the right, he preceded into the box where he was caught by the outstretched foot of Davison and the referee awarded a penalty. N Mulligan stepped up and smashed home the penalty to make it 1-0 after 16 minutes.

RCA’s first real threatening move started when Allen won the ball and played it forward to Bennett who in turn moved it on to Fryatt, the winger sliced through the Stockton defence but with only the keeper to beat he tried to chip the ball over McDonald’s head but it went straight into his hands.

To add to the disappointment of a possible equaliser the Anchors went down the other end and from McDonald’s clearance the ball was picked up by Hayes who side footed it to Roberts who slotted the ball into the bottom corner of the net.

Three minutes later and Stockton were out of sight. Hayes picking up a loose ball unmarked on the edge of the box he curled a sublime floated shot into the top corner giving Ezard no chance.

From the kick off the ball was quickly worked forward by Nelson who stabbed the ball forward to Fryatt but once again from a promising position his composure let him down and he blasted the ball over the bar.

In the final minute of the half RCA should have pulled one back when Fryatt skipped past his marker before cutting the ball back into the path of Davison but the normally reliable striker scuffed his shot straight into the arms of McDonald.

The second half was once again pretty much controlled by the passing and movement of the Northern Premier League side who looked to build from the back.

Any forays by RCA’s forwards into the opposition’s half were quickly stopped by a solid looking back four.

In the 55th minute Stockton increased their lead when a long ball forward missed out the RCA defence and the ball was picked up by Beddow who rounded Ezard before slotting the ball beyond the despairing dive of Hawkins.

RCA continued to attack and Annang-Colquhoun, playing his first match for three weeks, picked up the ball on the right wing before checking inside and squaring the ball to Fryatt but he blazed the ball wide when a better option might have been a square ball to Davison.

Stockton’s fifth goal came courtesy of a clever ball into the box from the right wing by Hayes and Nelson was only able to help the ball into an empty net as he tried to clear the ball off the line.

Both teams made late substitutions and RCA’s Richards almost produced a consolation goal when he won the ball on the right but his dangerous cross into the box was missed by Davison and the ball was cleared by Hall.

The difference in the two teams was apparent from the start, with the Stockton team playing with an air of confidence while RCA’s looked tired and once the first goal went in their confidence drained.

To give them their due they continued to press forward looking to entertain but tonight it didn’t come off against a very slick and well organised team.

Good luck to Stockton in the quarter finals.