THE model fiance of German keeper Kevin Trapp dressed in a full kit with her husband’s number for their World Cup opener on Wednesday.

Hansi Flick’s men were on the receiving end of a stunning upset in Doha as Japan came from behind to beat Germany 2-1 in a thrilling clash.

And it was made worse for the German players by the fact that a host of their partners were in attendance for the match.

Trapp’s wife, model Izabel Goulart, caught the eye more than the rest as she chose to wear a full keeper’s kit.

She even had the No12 printed on the strip – Trapp’s number for the World Cup – although she did not see her man player because Manuel Neuer remains the Germany No1.

But she was far from the only Wag in attendance at the Khalifa International Stadium. 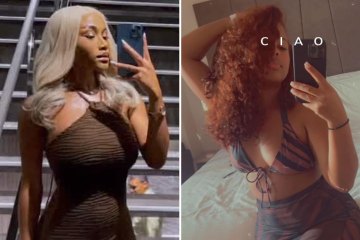 A group of them were spotted enjoying themselves in the ground – presumably a short while before things went wrong for Germany.

Sophia Weber, the partner of Chelsea forward Havertz, was also spotted in the stands.

And so was Christina Raphaella, the wife of Matthias Ginter, and Lina Meyer, wife of Joshua Kimmich.

But their attendance did little to stop Germany from being beaten in breathtaking fashion.

And it means they now have a must-win game against Spain on Saturday evening.

Luis Enrique’s men kicked off their campaign in stark contrast to the Germans, thrashing Costa Rica 7-0 in a one-sided mauling.

Trapp’s wife Izabel is known for her work as a model[/caption] She has been engaged to the German keeper for four years[/caption] Izabel will be hoping Germany can improve against Spain on Saturday[/caption]
Загрузка...