Mat, 35, supports Luton while Stephen, 80, is Stockport through and through.

Apart from following clubs with the same nickname, Mat and Stephen share something else in common.

Both have been told to expect only months to live.

Mat has bravely battled cancer for five years — but the malignant melanoma, originally found in his left leg, has now spread to his lungs, brain, liver and possibly bones. 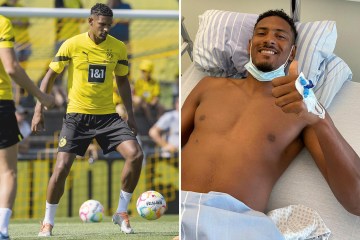 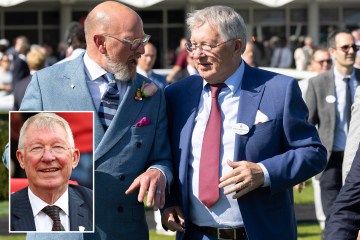 But despite their situations, football has helped bring them joy as it always has done throughout their lives.

Mat has remained remarkably upbeat and even jokes about dying with family and friends.

On Saturday Alfie was the Hatters’ mascot for their Championship opener against Birmingham — and fans applauded after 35 minutes as a mark of support to Mat, who was watching with his family.

He put out a tweet last Monday, which read: “I can’t wait for the @LutonTown game. Mixed emotions tho, my son will be mascot. Amazing!!! Tho due to cancer giving me six months left, it will be the last game I manage to get to. Make it a good one lads!!!”

It touched the hearts of fans everywhere — including from Luton’s bitter rivals Watford.

So moved by this the Hatters invited Mat and his family to watch their final training session on Friday ahead of the new season and to have lunch with the players.

Mat told me: “They call it the ‘football family’ and I’ve been amazed by the support. Even Watford fans have sent kind messages. It shows people put rivalries aside to support people in need.”

Mat decided to approach Luton about making Alfie a mascot after he received the grim prognosis so he could enjoy witnessing him leading out his heroes.

And he added: “It’s something we’ve wanted to do for a few years but with news of my health we decided to get it done now.

“It was something we could do as a family and in the time left we want to enjoy every hour available.”

Football has been Mat’s passion for as long as he can remember. He watched his first Luton game in 1996 and became a season ticket holder. His favourite player was goalscoring hero Tony Thorpe.

He said: “It’s never boring being a Luton fan but since Nathan Jones took over as manager, on both occasions, this club hasn’t looked back.”

His sister Jo Matthews, 38, will this month run a mile EVERY day to raise funds for Cancer Research UK, who are dedicated to helping find effective treatments and ultimately a cure for this wretched disease.

Jo has decided to route her mile around stadiums local to her home in Yorkshire.

And she wants to run around Kenilworth Road on Friday August 26 ahead of Luton’s game against Sheffield United.

Jo told me: “Although I’m a Luton girl, I’ve lived in Yorkshire 20 years and my husband and son are both Blades fans. If Mat’s health allows, I’d love for him to make that game too.”

Mat is clear what football has given him. He said: “It has helped me throughout my life. It’s 90 minutes where you can park everything else to the side and enjoy the game.”

Stephen meanwhile thought he would never get to see the day County won back their EFL status.

And he was gutted he could not see County clinched promotion as he was too unwell to leave the hospice.

But the newly-promoted League Two club visited Stephen and made sure he was the first person outside the club to hold the National League trophy.

He said: “I’ve supported Stockport over 50 years through thick and thin. It’s a place I call home. I’ve spent quality time there with my family and have met many friends. Our fans are the best.

“The realisation I’ll never see them play in person again is tough but I’ll continue to watch games online while I can.”

* YOU can sponsor Jo and donate to Cancer Research UK by visiting https://fundraise.cancerresearchuk.org/page/31-miles-for-matt or via their website direct.

Putting in the hard Miles

TWO Charlton legends were madly celebrating at home when Miles Leaburn scored on his professional debut for the club at Accrington on Saturday.

Former Addicks striker Carl Leaburn and the club’s head of first-team player care, Tracey Leaburn, are his parents and no-one was prouder when the 18-year-old netted what everyone thought was a stoppage-time winner.

Unfortunately for them, Accy managed to level in a 2-2 draw but that did little to dampen their mood.

Proud mum Tracey told me: “Carl and I were going mad when he scored. I was literally sobbing.

“We’re both so proud. He’s come a long way since he first started kicking a ball aged four when we got him playing through Charlton’s Community Trust.”

In the end, Chelsea signed him where he stayed until he was 16 but he returned to Charlton two years ago and was promoted to the first-team squad this summer.

His parents spoke to him as he headed home on the team coach and Tracey said: “I was screaming down the phone, I was so buzzing. I told him how proud we were but he must keep his feet on the ground — but he’s laid-back, a bit like his dad, and has a level head.”

Tracey admits it is strange seeing her boy come in for training at her workplace each day and laughed: “I have to stay professional and treat him like all the other lads — even when I just want to give him a big hug.”

You can be sure he got one from his mum when he got home on Saturday night.

IAN MAATSEN must have heard Trevor Sinclair’s commentary on Talksport at Huddersfield on Friday night.

The former England winger was complaining that on-loan Chelsea full-back Maatsen was lacking an end product and was being too precise in what he was doing.

A minute later Maatsen scored with a precise curling effort that nestled into the bottom right corner.