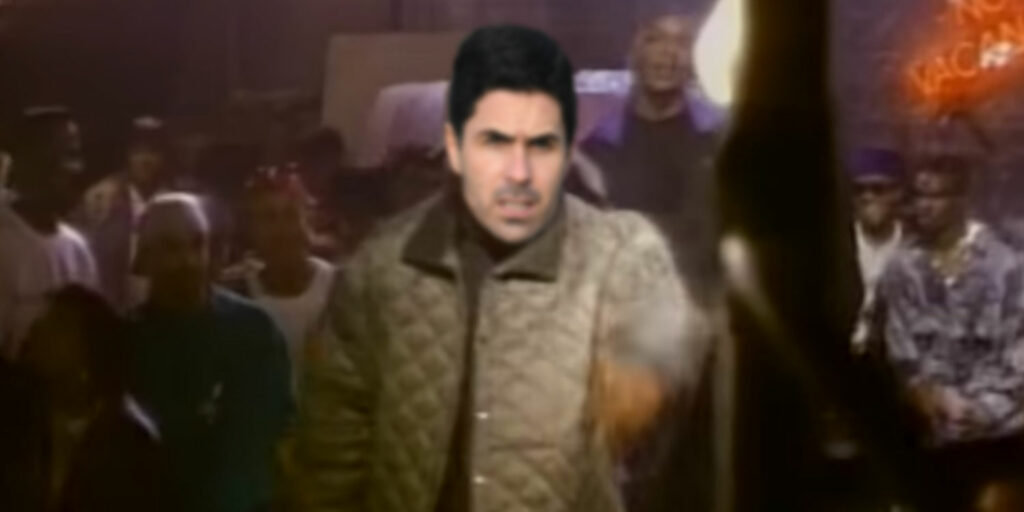 Our pre-Liverpool presser takes place this morning. Personally, I’d like Mikel Arteta to come out and announce that we’re seeking a postponement due to a load of ‘suspected’ cases of Covid … via the medium of rap.

Surrounded by dozens of double-lined tests, he whips out a mic and starts giving it large to some sick beats:

I don’t think I’d like that at all, actually. It’s just the LFT thing got in my head this morning when YouTube threw up a suggestion. Why am I looking at YouTube at 6am? I was just closing some tabs and there it was. I only had about 48 tabs open in my browser but still needed a bit of space to work. The good thing is that this song now in your head for the day. It could be worse though, it’s a cracker.

We’ll get some update from Mikel Arteta about our midfield situation and whether or not Granit Xhaka is available. Honestly, this man is something else. I know we’re light because of Thomas Partey and Mohamed Elneny being at AFCON, and the departure of Ainsley Maitland-Niles, but how does he end up being so important while at the same time a player I’d love us to move on from? Right now, like it or not, he is important. We’re almost dependent on him but of course it depends on whether or not he’s available after catching Covid again, and well enough if there were some effects from the virus.

If he’s not, the manager has got some serious thinking to do about his team, and with a North London derby on the horizon too, he has to consider if using some players who are dealing with injury problems is wise. Let’s be clear, I’d rather not see Cedric but I want Takehiro Tomiyasu available for the North London derby. Would you take a dollop of Cedric tomorrow to ensure Tomi was fully fit for Sp*rs? That’s a difficult choice. I know I want the latter, but I don’t want to experience the former. Maybe we could play Calum Chambers at right back even though he hasn’t played a lick since August really. On the plus side, he’s not Cedric.

A Xhaka-less midfield tomorrow would mean moving pieces around. I don’t think you can throw Charlie Patino in again, so the return of Emile Smith Rowe might help, but again he’s someone who has been dealing with an ongoing groin problem – hence his lack of playing time lately – and if he twangs his bits at Anfield, how he is going to score two and get two assists on Sunday? It’s quite the conundrum.

Anyway, lots of stuff for the manager to get on with – rap or not – in his press conference, and we’ll have all the stories this morning over on Arseblog News.

Moving on to transfer gossip, and there’s some stuff about Eddie Nketiah and Crystal Palace again. A report in The Times said the two parties were ‘in talks’ about a move, but it’s all very vague. His move there in the summer broke down over personal terms, and with a summer Bosman looming, I’d be very surprised if a) Palace paid any money now for a player they can get for free in 5 months and b) Eddie decided his future in January rather than at the end of his contract when he’s likely to have more to choose from.

Whatever he decides though, his recent opportunities have given him chances to impress and to make important contributions, but he fluffed his lines with close-range headers – the kind of penalty box chances he’s supposed to be clinical with. Sometimes – like at Everton – it’s the width of a post that can tilt a player’s future one way or the other, but the ball splatting off his face against Forest when it should have been in the back of the net was the kind of miss that makes you think his mind is elsewhere right now. You have to score those if you’re really staking a claim for a new contract at a club, he didn’t, and I think that says plenty about what we need and what’s best for him.

Elsewhere, the are reports that Udinese are interested in Pablo Mari on loan, and like Cedric he’s another player whose bags I’d happily pack. He hasn’t been seen since Romelu Lukaku looked at him sternly and made him fall over back in August, and like strikers missing chances, moments like that can define a defender’s career. I don’t know how much a loan benefits us, particularly as we’d then have no established back-up for Gabriel, but then I don’t know who would actually buy him either. Rob Holding can cover, and Tomiyasu plays centre-half for Japan on a regular basis so he could do a job if needed, but then that leaves a big hole at right-back and we return to the C word again and nobody wants that. Surely summer is the time, even if we have deemed him surplus to requirements.

Suffice to say that we have some quality issues when it comes to some of our squad players. The best we can hope for between now and May is the main men stay fit and available, and if we do have to use those lower down the pecking order, it’s not for any sustained period.

Finally, there’s Vlahovic mayhem with information coming from all kinds of places but it’s hard to know how to parse the situation as a whole. It feels like there are people involved whose first interest is to make serious money off the entire deal, and while I know that’s part and parcel of the way football works, there’s a line in the sand when it comes to that kind of thing, and it does set some alarm bells ringing in my mind. I hope Arsenal have other targets this month because –while I might be wrong – this feels like one where you’d be wise not to have all your eggs in one basket.

Right, that’s your lot for this morning.