Tottenham Hotspur take on Burnley in the Premier League this weekend as they look to bounce back from that embarrassing defeat to NS Mura.

We believe that Antonio Conte will make nine changes from Thursday night, reverting back to the starting XI that eventually beat Leeds United last week.

Hugo Lloris starts between the sticks, with a central back three of Ben Davies, Eric Dier, and Japhet Tanganga. All three featured against NS Mura, but only Tanganga started the match.

In the wing-back positions, we believe Conte will opt for Sergio Reguilon, especially after Ryan Sessegnon’s red card display, and Emerson Royal.

In the engine room, Pierre-Emile Hojbjerg partners Harry Winks again, with Oliver Skipp having been deployed in the Conference League on Thursday. He drops to the bench.

Up front, we have the trusty three of Heung-min Son, Harry Kane, and Lucas Moura, although all of them are in desperate need of some goalscoring form. 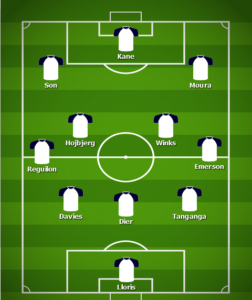