PEP GUARDIOLA finally got back at Thomas Tuchel following three consecutive defeats against the German.

Premier League champions City left Stamford Bridge with three points to help console their Champions League final loss to the Blues in May.

Chelsea suffered their first defeat of the season[/caption]

Replaced Kepa after returning for injury and in the first-half was very commanding from corner kicks.

Rooted to the spot for Jesus’ opener after a wicked deflection took it past Chelsea’s No1, who made some big saves afterwards.

Frustrating afternoon for the England international, who came off injured on 29 minutes and was replaced by Thiago Silva.

Heading into Chelsea’s Champions League trip to Juventus on Wednesday, James joins Mason Mount and Christian Pulisic as a doubt.

Reece James was brought off injured[/caption]

Shifted to wing-back after James’ injury, the Spaniard was not able to get forward as much as he would have liked, with Grealish down City’s left.

Chelsea could have done with James’ attacking presence especially with the runs Werner was making but with no support.

Had the trouble of marking Jack Grealish and did a good job staying tight to the Three Lions’ fan-favourite, who craves space to work with.

Another good performance by the academy graduate, who is becoming increasingly better with the ball at his feet.

Antonio Rudiger had a battle with City’s Jesus[/caption]

Played left of the back three so spent most of his time tracking and keeping tabs on Jesus, especially when the Brazilian sneaked in behind.

Rushed in at times towards the end as Chelsea chased a goal but was well supported by Silva.

One to forget for the Spaniard who was caught in possession a few times early on and it took 55 minutes for his first meaningful cross.

Despite a good start to the season, Ben Chilwell would have watched from the bench with confidence his place on the left is not all lost.

It was shades of Maurizio Sarri’s reign and Frank Lampard’s early start as Chelsea boss for Kante, who played right of a midfield three.

The Frenchman was coming into life in the second half before he was brought off for Kai Havertz, to give a more attacking edge.

Could not do much to prevent Jesus from swivelling and getting his shot off to put City in the lead, after a deflection put it past Mendy.

Acted as the deep-lying midfielder but was not given the time and space he likes to pick out passes and was often camped back helping his defenders.

Jorginho was the deep-lying midfielder for Chelsea[/caption]

Golden chance to put either Werner or Havertz through on the 68th minute but his left-footed pass was just intercepted despite his urgency to break.

Full of energy but missed the final ball to really put Chelsea away which summed up Chelsea’s frustrations.

The German was very active on the left wing and often got in behind but lacked the confidence on the ball to really skip past or beat City defenders.

Werner never stopped making himself available on the flanks but failed to produce and often slowed the attack down before offloading the ball.

Timo Werner in a tussle with Ruben Dias[/caption]

Struggled in parts as he found himself isolated down the middle with Werner drifting out wide and no midfielder in an advanced role.

Clear Lukaku will profit more with two attackers either side of him opposed to Werner as a partner with the forward often left with little support.

Super block off the line on the hour mark as Mendy tipped it out but only to the feet of Jesus, whose effort was cleared by the veteran defender.

The German, who scored Chelsea’s winner against City in the Champions League final, will feel he should have started, and his bright performance from the left means he could return against Juve.

Ruben Loftus-Cheek (on for Jorginho) – 7

The playmaker was an immediate impact and had plenty of pace and power from midfield, trying to carry Chelsea up field and made his mark as a contender in Chelsea’s midfield. 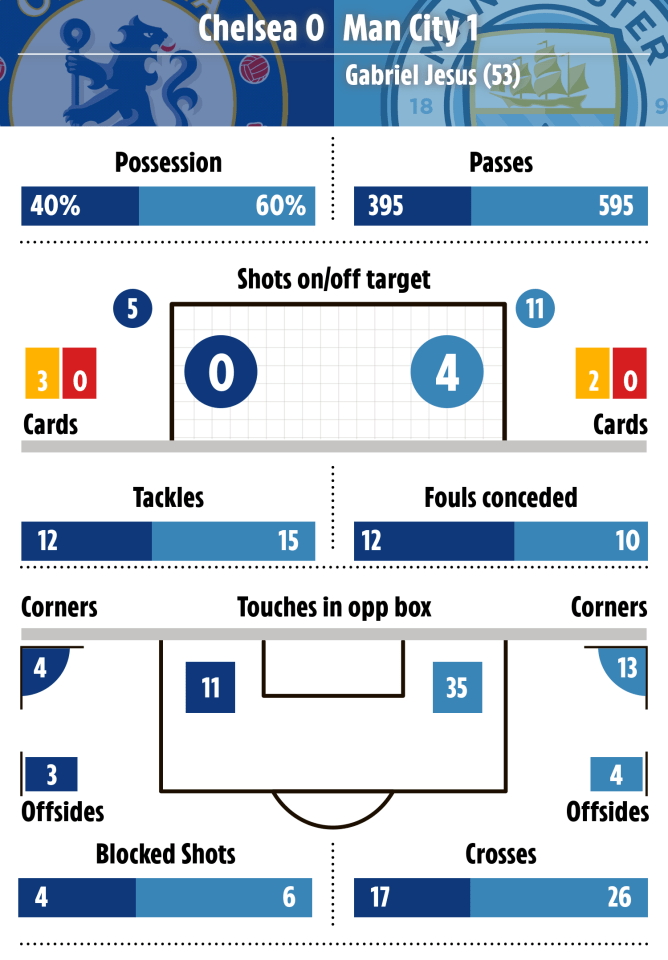