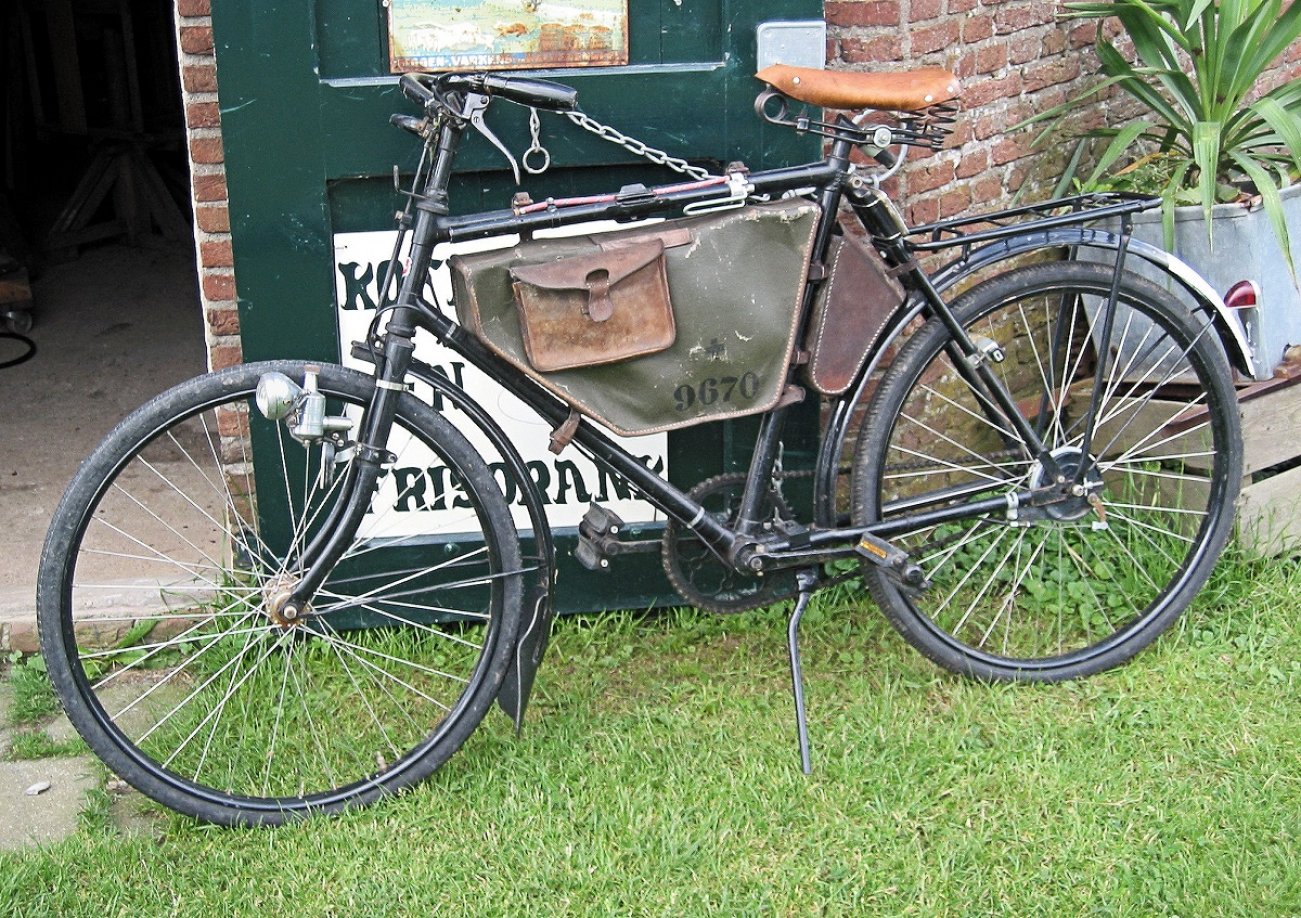 Cycling also has a long and colorful history that includes service in various armies in Europe, and for that matter the world.

Visit parts of Europe—especially France, Italy, and notably the Netherlands—and you’ll find lands where people love their bikes. Bicycle racing is one of the most popular sports in Europe, following only football (soccer) in overall popularity. For many Europeans cycling is part of daily life as people commute to work, get to the store and when possible, get away from it all.

Cycling also has a long and colorful history that includes service in various armies in Europe, and for that matter the world.

As with the automobile no one person, or persons, can lay claim to actually inventing the bicycle. The first person generally credited with building a two-wheel device that would be the forerunner of the modern bicycle was German Baron Karl Von Drais, who in 1818 devised an in-line contraption that was propelled by the rider’s feet. This horse substitute, which was aimed at the well to do, didn’t catch on, however.

Other inventors and tinkers attempted to create the human-driven machine, but it actually wasn’t until the 1860s that Frenchmen Pierre Michaux and Pierre Lallement introduced a pedal-driven system that would propel bicycle technology and subsequently the riders forward.

Further innovations in pedal-driven systems lead to the development of what is now known as the “ordinary bicycle,” or just as often to collectors as the “penny-farthing.”

That bicycle is noted in that it featured a tall front wheel and was known for being a bit difficult and even dangerous to ride, as these had a high seat and poor weight distribution. Such bicycles were novelties for the wealthy—or more accurately, wealthy men. No proper lady would ever consider riding such a bike.

The ordinary bicycle introduced the French to their love affair with the bicycle—one that continues to this day. These bikes, while awkward to ride, were tested by the military for dispatch riders and scouts during the Franco-Prussian War of 1870-71. Ironically it was this war that also destroyed the first fledging French bicycle industry, yet it was far from the end for bicycle innovation.

Development progressed in Great Britain and even in the United States, where technological advances included a chain-driven system that allowed for a more stable riding platform. English inventor John Kemp Starley built on this development, and produced the world’s first successful “safety bicycle,” which was dubbed the “Rover.”

Released in 1885, its design would be recognizable even today. It featured equally sized front and back wheels, with the front being steerable and a chain drive to the rear wheel. This bike designed caught on during the 1890s and many military thinkers saw its potential. According to The Bicycle in Wartime: An Illustrated History by Jim Fitzpatrick (Brassey’s Inc., 1998) the late 1880s and 1890s saw many nations experiment with bicycles.

The British may have beat their continental rivals to the finish line, and used cyclists as scouts during field maneuvers in the Easter exercises of 1885, but both the Austrians and Germans each considered the possibilities of using the two-wheeled contraptions in 1885 and 1886 respectively. Yet it was again the French army that formally introduced the bicycle into service in July of 1887.

Across the Atlantic, the Americans followed suit as some National Guard regiments experimented with bicycles. The First Signal Corps of the Connecticut National Guard formed the first military bicycle unit in 1891, when the bicycle was used by messengers and relay riders. Various challenges ensued including one that had a Connecticut National Guard cyclist prove he alone could deliver a message faster than an entire flag signaler team, while a relay team carried a single dispatch from Chicago to New York City in just four days and 13 hours, with much of it in rainy weather. A follow-up challenge brought a message from Washington, DC to Denver in just over six days.

Bicycles Ride off to War

While the bicycle proved that it could deliver messages via a rider carrying the dispatches, military planners adapted it for use with portable topographers and even telegraphers. In one case a rider used his bike to study the grade of hills and other terrain to help commanders in the field determine if the land was traversable with cannons and wagons. In another case, bikes were actually used to lay a cable from a command post to the front lines. Both uses no doubt seemed practical to designers, but in the field proved otherwise.

More radical concepts were devised as well, and various nations conducted tests to see if a bicycle could be used as actual gun platforms. In the 1890s multiple nations conducted field tests that included adding a sidecar mounted with early machine guns, as well as side-mounted rifles that could be fired from the handlebars. As these were prototypes, which not surprisingly failed to go very far past proof of concept, few if any of these early bikes survive today, even in museums.

The bicycle proved to be a new machine of war, yet some military planners instead looked to see if tactics could be devised to use the bike in combat. This begat the first practical study of tactics for bicycle riders, and this was just in time for the bike to head off to a real war.

It is generally accepted that it was during the Second Anglo-Boer War in South Africa, which began in 1899, that the bicycle was first had its baptism of fire. Bicycles were used by messengers, adapted into portable stretchers, and even used as a part of a specially devised two-man cycle to patrol the railroads. In the latter case, about twenty were built for patrol work, however, none are believed to survive today.

The use of bicycles was not limited to the British either, as the Boers too adopted bikes in place of horses on a very limited scale. The bike had been tested in battle, and it looked as if it would find a place in future wars.

The First World War, which began as a very mobile and fluid conflict at first, did seem to be ideal for bicycles, and both sides on the Western Front used a large number of bikes to help troops get to the front lines quickly. However, as it bogged down into the hellish nightmare of trench warfare the two-wheel machines were relegated to rear echelon duty. Cycles were used to some degree by sharpshooters in less static areas, as well as by scouts and of course dispatch riders.

Bicycle technology advanced again following the war, as well as increased interest in bikes throughout Europe for leisure and sports. Even in the United States cycling began to catch on, and it was a sport that rivaled all others, with venues such as New York City’s Madison Square Garden hosting daylong cycling races and events. Only with the advent of the radio, and the sport of baseball, which was easier to call by announcers, did cycling fade as America’s premier sport. Across the ocean however it remained popular—and so too bicycles remained machines of war as much as machines of sports and peace.

A generation after the trench warfare of the First World War, the outbreak of war in Europe and Asia put the cycle back in the field. The German Army, even during its rapid moving blitzkrieg, still relied on horse-drawn carriages to transport men and equipment, and bicycles also played a part.

Wartime shortages throughout World War II also resulted in many nations utilizing the bicycle to save on fuel. This was especially true in isolated Great Britain during the Blitz and followed even after the Yanks arrived in great numbers. The United States, which was also on wartime rationing, relied on bikes in great numbers. Ironically for collectors, few of the American bikes have survived the war.

Unlike with other American gear from World War II little information has been left as to the total numbers produced, and even today it is not clear just exactly how many bikes were made for the U.S. Army on official wartime contracts.

While bikes were never utilized in great numbers by the American forces and only in a limited frontline role by the British, there was a wartime enemy of the Allies that used cycles in much larger numbers. The Japanese actually relied on the bicycle more than any other power during World War II.

During the invasion of Malaysia, there were thousands of Japanese soldiers rolling towards Singapore on bicycles. The Japanese had developed folding bikes specifically designed for warfare—later rehashed for civilian use—but also requisitioned bicycles from other occupied/conquered territories.

The Japanese also have earned notoriety for being able to adapt and overcome with their bicycles. As rubber was in short supply it is reported that Japanese soldiers learned to ride on the rims when the tires went flat and couldn’t be repaired.

After the Second World War, the civilians were the ones who had to adapt and overcome, and many of the wartime bikes passed to civilian hands as the world recovered from the horrors of the war. This was especially true in Europe, where fuel was still hard to get and where there had been an existing bike culture.

As a result, there are more bikes in collections in Europe than in the United States.

The other part of this is that cycling had been more popular with adults following World War II and many surplus bikes were actually shipped to Europe after the war. The bicycle is a classic example of “from swords to plowshares” as it became a means of transport for civilians again.

Yet its war days were not over. While it isn’t the most iconic image of the Vietnam War, the Vietcong and North Vietnam forces in fact utilized bicycles in great numbers. It may be hard to imagine how well these bikes fared in the dense jungles, especially as this was a decade prior to the “mountain bike craze” that began in California and Colorado, but the bikes actually did their job. Bicycles were also used in other rural conflicts, including in Central America, throughout Africa and are still in use today with American troops in Afghanistan.

Bikes in the Neutrals

Ironically, two nations that used bikes in greater numbers than most haven’t actually used them in anger, the neutral nations of Sweden and Switzerland. Each has rugged terrain and a truly independent spirit.

Sweden was among the forerunners of bicycle technology for military use, and the 27th Gotlandic Infantry Regiment replaced its cavalry complement with bicycle-mounted troops in 1901, and by 1942 the nation had six bicycle infantry regiments. However, from 1948 to 1952 the Scandinavian nation began to decommission its bicycle infantry regiments, and by the 1980s only special bicycle rifle battalions remained.

Most of the vintage military bikes were sold off, and for collectors, the war-time era ones tend to be more desired, even though the Swedes didn’t take part in the Second World War. Commercial versions based on past military designs are also available today, but these were never technically “military bikes.”

Europe’s other main neutral power of Switzerland had a long history of military cycles as well. The nation’s Bicycle Infantry was introduced in 1905 and only phased out in 2001, and for nearly 100 years the bikes that the mountain nation used were known for their high quality and equally high durability.

In 1988 the Swiss updated the bikes, and this resulted in Switzerland selling nearly all of its stocks. Thus the famous Swiss Army Bike is almost as famous as the Swiss Army Knife today in collector’s circles.

Peter Suciu is a Michigan-based writer who has contributed to more than four dozen magazines, newspapers and websites. He is the author of several books on military headgear including A Gallery of Military Headdress, which is available on Amazon.com.