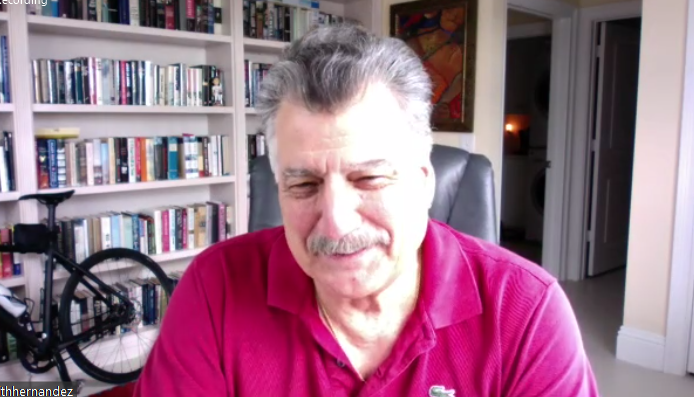 It was one of the rare times the Mets let Keith Hernandez speak uninterrupted. The franchise legend led a Zoom call to discuss his upcoming jersey retirement on July 9, becoming just the fourth in team history to receive the honor.

Hernandez talked about what the moment meant to him and more during the hour-long call.

Hernandez was able to introduce himself.

“I was caught completely off guard. Yesterday the phone call from Steve Cohen, his name popped up on my screen and I thought maybe he wanted to talk about the team. So we had a 10-minute conversation about the events that have happened this offseason for the Mets and then he said that wasn’t the reason he was calling. He dropped the bomb on me and caught me completely by surprise. I had no idea and it’s just kind of sinking in now today.”

“This is the highest honor that our organization can give to a player. I grew up as a kid like everybody else going to baseball games and going to some of these parks with the names up on the wall and the numbers retired for them. I’m just a little blue-collar kid growing up in Northern California. It was my dream to be a ballplayer and then to have a team and all the success that I that through Major League Baseball had a lot to do with my former teammates as well. But this is unbelievable. I’m just ecstatic and so proud and so thankful.”

A: I found out late afternoon and obviously got on the phone trying to get ahold of my family and nobody answered. Eventually, they got back in touch with me. I can’t think of the right term. I don’t think bewilderment is the right term but I do feel like I’m lost in space that this has happened to me. That this honor is something I never dreamed of.

Hadji didn’t wake me up like he normally does at 5:30, he let me get an extra hour of sleep.

Q: Was there ever a moment when you thought this was going to happen? And secondly, what did you think when you saw No. 17 on the likes of Mr. Koo and the other roster of people?

A: I’ll talk about David Cone who wore my number in my honor which was very flattering. David and are such great friends and that meant a lot to me. As the other part of the question and the other players have my number, I almost went to the equipment manager and said ‘What the heck are you doing?’ it’s like a JC Penney’s sale here.

Q: Does Gil Hodges finally getting into the Hall of Fame make you think about your chances of getting in?

A: I do feel that of all the sports the Baseball Hall of Fame is the one that is the gold standard, and I think it should remain that way. But you know there are always players that you feel should be in there that aren’t and vice versa. I have no control over it. Do I want to get into the Hall of Fame? Well, shoot, yeah. I would love to get into the Hall of Fame. But we’ll have to wait and see. I’ve been out of the game a long time, maybe the analytics that have come into the game, like Sandy (Alderson) loves me with that .446 on-base percentage. Hopefully, I got another 15, 16, 17, 18, years left of life and maybe it’ll happen before I kick the bucket.

Q: Do you feel the Mets are now joining the wave of digging into their own past and honoring guys who mattered to the franchise like you?

A: I do and I think it’s been publicly spoken by Steve Cohen and our new owner that he wants to create this tradition in the Mets. Everybody involved from my age to think of the Mets I remember when they came through in 1962 when they first joined the National League. I would have been eight years old my first year in a little league. No one really cared about the Mets or the Houston Astros they were the Colt 45s, but they’re 60 years old now. This is the 60th year in baseball and that is significant and there is history, and there should be tradition. And I think that this is all coming together. With the 60th anniversary, you got the unveiling of the Seaver statue, my number is getting retired and this is kind of a snowball effect. We recently had Mike Piazza’s number retired. So I think it’s very important that the fans have a sense of the history of their team.

Q: Why did this take so long and did you get any information from the club about why?

A: No, I never inquired. It wasn’t something that crossed my mind very often. I was very pleased that Piazza had his number retired and also retiring Koosman’s number. I think when those things happen, Mike was the first number to be retired in quite some time, so maybe this was starting to warm up and go in the right direction. It’s not something that I thought about and wasn’t going to ruin my day.

Q: What does this franchise mean to you?

The post “Something I Never Dreamed Of” Keith Hernandez Speaks on Jersey Retirement first appeared on Metsmerized Online.