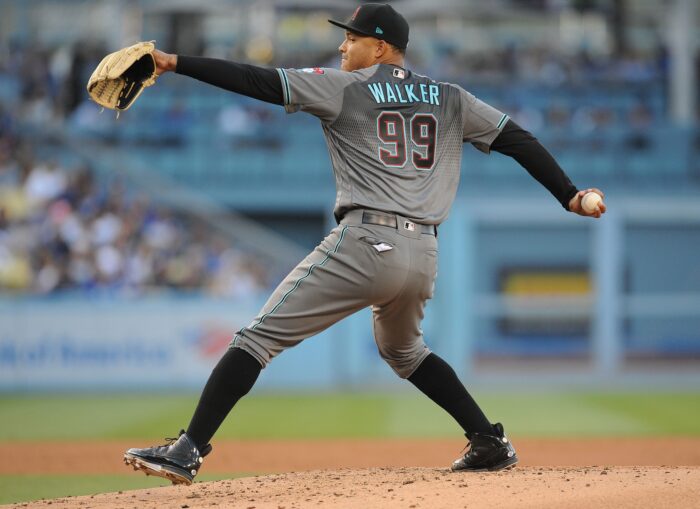 As reported here on MMO, the Mets have agreed with pitcher Taijuan Walker on a two-year deal. Walker will join Jacob deGrom, Marcus Stroman, Carlos Carrasco, and likely David Peterson in the Mets rotation to begin the season.

The deal will pay Walker $17M over two years, with a salary-escalating player option for a third year. Walker is not the marquee name many fans were hoping for (such as Trevor Bauer), but the Mets seem comfortable with Walker as the fourth starter, perhaps moving to a fifth starter role when Noah Syndergaard returns mid-season.

Let’s take a closer look at Walker’s career and where the Mets have dedicated $10M in 2021.

First, Walker will be 29 years old during the 2021 season. He is a native of Shreveport, LA, and was drafted by the Seattle Mariners in the first round (supplemental, 43rd overall) of the 2010 amateur draft. He made his major league debut in 2013 for the Mariners, appearing in three games.

Walker was traded to the Arizona Diamondbacks before the 2017 season. In 2017, he went 9-9 for the Diamondbacks, with a bWAR of 2.6. Early in the 2018 season, Walker went down with a partially-torn UCL, requiring Tommy John surgery. He missed the remainder of the 2018 season, and made one appearance on the last day of the 2019 season.

In looking at Walker’s career, he allows about a hit per inning (541 H in 581.2 IP). He does not walk many, and he keeps the ball in the ballpark, allowing just over one home run per nine innings pitched. He’s not a big strikeout pitcher, and pitches to contact. Through his career, he’s thrown his four-seam fastball 58% of the time, his splitter 17% of the time, and his slider and cutter a combined 22% of the time.

A pitcher with Walker’s splits on pitches thrown should induce ground balls, and Walker has done this, getting ground balls about 44% of the time versus fly balls 36% of the time. He will need a good defense behind him, and with the Mets, this is somewhat of a question mark. With Pete Alonso at first base and J.D. Davis at third base, the Mets’ infield will be compromised defensively. The same can be said of the outfield defense on the days that Brandon Nimmo is in center field and Dominic Smith is in left field.

The Mets can improve their defense with Smith at first base, Nimmo in left field, and either Kevin Pillar or Albert Almora in center field. However, this places the home run bat of Pete Alonso on the bench (if there is no DH).

Walker’s Tommy John surgery is slight cause for concern, however, the surgery is so common now, and his 2020 was very solid, so it’s reasonable to assume that he’s made a full recovery (as many pitchers do).

When the Mets signed Walker, they were not looking for a top-of-the-rotation starter. They have quality starters already in place. They were seeking a back-of-the-rotation starter with major league experience, and they got exactly that with Walker. He may not be a name that makes the headlines, but often times it is depth pieces that make a significant difference in a team’s fortunes.

Walker looks like a good fit, and a good investment of $10M for the role he’s expected to fill on the 2021 Mets.