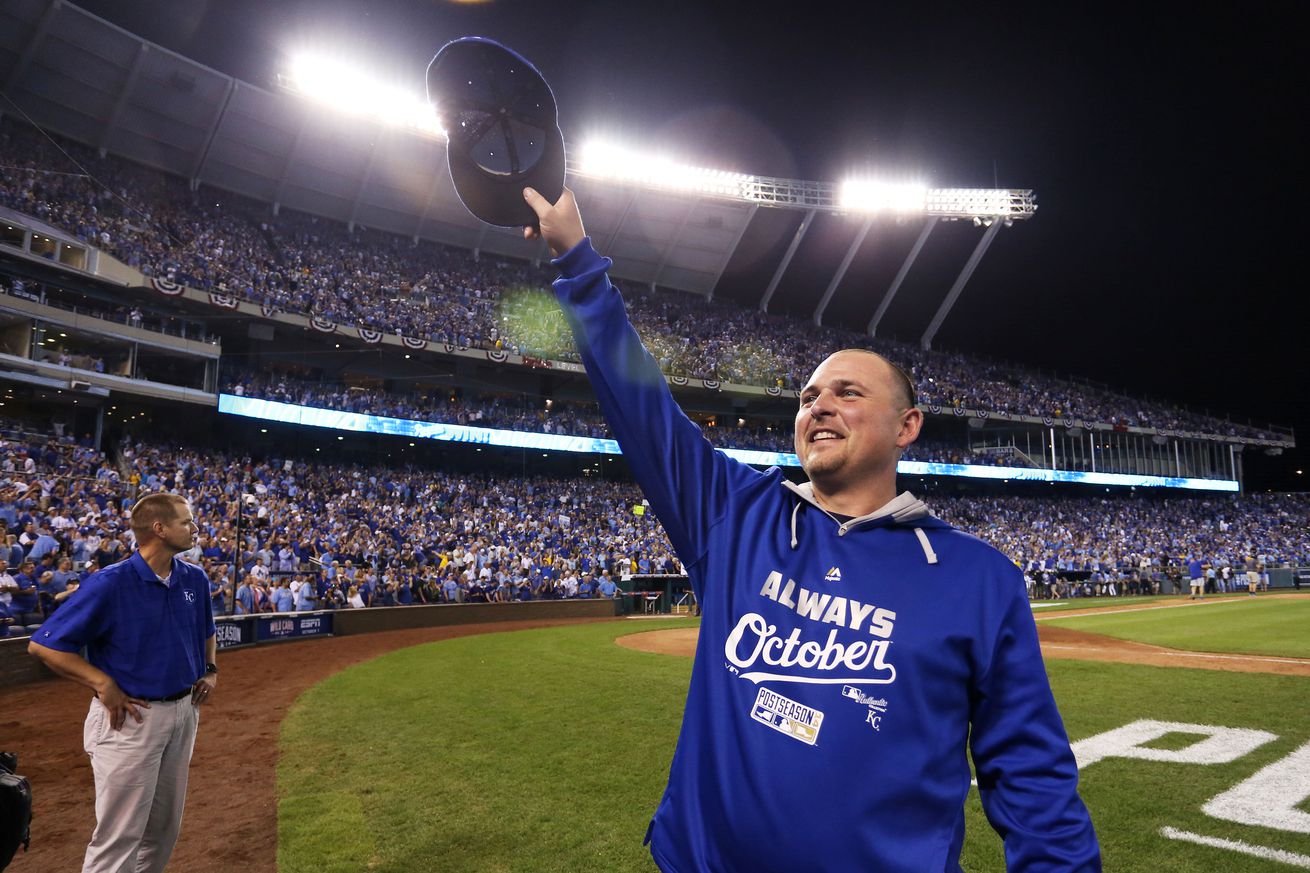 It is Always October.

In his Mellinger Minutes, Sam looks back on the season for the Royals and ahead to what they might do.

I’m not expecting any major moves, though I do believe Danny Duffy could be had for the right price. The approach will generally be of continued patience. Perhaps a veteran outfielder will be brought in. Everybody is always looking for pitching.

This remains a long-term play, even as fan patience is wearing thin.

Next season is critically important. The Royals will debut a number of homegrown players to the big leagues including, perhaps, Witt Jr. and Lacy. The idea will be to acclimate them all not just to big-league competition, but to 162 games*.

We will, vaguely, be in the 2011-2012 version of the last rebuild: transition, youth, moments of failure and success.

The traction is starting. The Royals are becoming interesting again.

Lynn Worthy writes about why Adalberto Mondesi’s resurgence was so important.

Mondesi offered no revelations about changes or tweaks that kick-started his offense. He simply stuck to the old standbys of staying focused, working on his pitch selection, knowing the opposing pitcher, staying behind the ball and playing hard.

Even while struggling, he maintained that he always knew things would turn around if he just kept working at it.

“I was very happy that I was able to have a front-row view of Mondi being Mondi and watching the excitement of every at-bat being able to change the course of a game,” Royals manager Mike Matheny said. “And watching the progression. There for a while, he was just stuck where he was trying to make adjustments and the adjustments weren’t really coming through with any real positive results.”

You knew it was coming, right? Here’s what Moore said when asked what the Royals need: “We definitely need more on-base guys. We need more quality at-bats from probably two other spots in the lineup.” One of those spots, it would seem, might be left field. Though Alex Gordon didn’t produce in 2020, opposing teams knew him as a competitive at-bat. Michael Brantley gets on base. Jurickson Profar has gotten on base. Joc Pederson can get on base. Cameron Maybin, too. All are upcoming free agents.

Uhlich was instrumental in leading the charge for the $275 million Kauffman Stadium renovation that was completed in 2009, a project that turned The K into one of the most fan-friendly venues in all of sports.

“Kevin was so aware of the importance to make Kauffman Stadium a family-friendly one,” Moore said.

Here are the Royals’ rosters for their fall instructional league camps: pic.twitter.com/Pxpq81SLv3

David Scharff at Kings of Kauffman looks at next steps for Dayton Moore.

Cody Rickman at KC Kingdom looks at positives from this Royals season.

Kevin O’Brien at Royals Reporters writes about former Royals to keep an eye on in the post-season.

The Chiefs and Royals partner with local groups to register voters.

MLB will allow a limited number of fans to attend the NLCS and World Series in Texas.

Twins outfielder Alex Kirilloff gets his first career MLB hit, and it comes in the post-season.

It looks like Phillies General Manager Matt Klentak will keep his job.

Are the Marlins turning a corner under Derek Jeter?

Which teams are best equipped to deal with no off-days during a playoff series?

Are we seeing the beginning of the end for independent baseball leagues?

NASCAR will run its first dirt race since 1970.

Why are so many chicken farmers in debt they can’t dig out of?

We are producing more garbage during the pandemic, and cities are struggling to keep up.

Your song of the day is Yellowcard with October Nights.