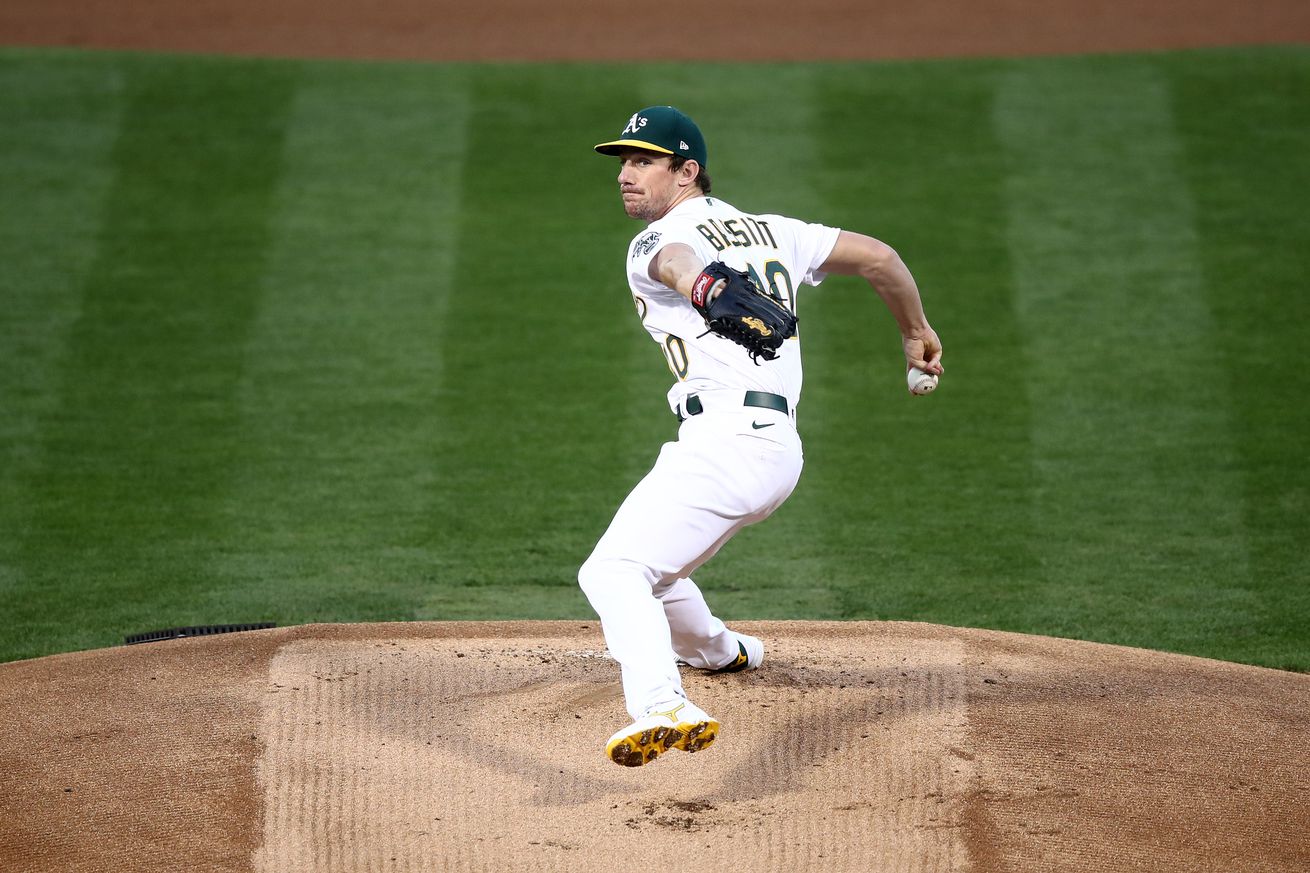 What a good dog!!!!! | Photo by Ezra Shaw/Getty Images

Maybe “You ain’t nothin’ but a hound dog,” but what a hound dog you are. Last night the A’s not only formally clinched a post-season berth but Chris Bassitt should have — and likely did — clinch himself one of three spots in the rotation for the first round.

This season deals exclusively in small samples, but Bassitt wakes up this morning with the best home ERA in the big leagues at 0.98. And the first round is the only series the A’s can play at home before they would take to the “bubble” for series in San Diego or Los Angeles, and hopefully Texas. Even if you prefer to view a larger body of work, Bassitt’s 2.57 ERA is 5th in the AL.

The picture is muddy at best, partly because the A’s opponent is unknown and so many possibilities still abound. That is because Oakland could reasonably earn the 1st, 2nd, or 3rd seed (currently they have the 3rd seed, with 19 losses to 18 by the White Sox and Rays), and also because the bottom seeds keep hopping around like Mexican jumping beans.

Case in point: before running off 8 wins in a row, the Yankees were the 8th seed but this morning they are the 4th seed, 1 game up on the Twins. Realistically, the Astros, Twins, Indians, Yankees, and Blue Jays all have a chance to be Oakland’s first round opponent.

This is important to the A’s rotation because decisions could be made based on L/R considerations. In my mind, Jesus Luzardo is a lock and Bassitt should be as well. The remaining options become a lefty (Sean Manaea), a potentially-dominant-but-erratic righty (Frankie Montas), and a low key wily-veteran righty (Mike Fiers). It’s interesting to note that the A’s do have a terrific record in Fiers’ home starts since he joined Oakland (22-5 if I recall correctly).

If my assumption is correct and the Luzardo/Bassitt parlay starts the conversation, how might the opponent inform the choice among Manaea, Montas, and Fiers?

If the season ended today — and it appears extremely unlikely that it will — the A’s would be the #3 seed and would play the #6 seeded Astros, who earn the #6 seed on the basis of owning second place despite their record of 25-26.

Here I do think the opponent would inform the decision, because I can’t see the A’s giving Fiers a start against the team that heard the shrill blowing sound of his whistle. It would be one thing if Fiers had faced Houston once or twice in the season series, but whether by coincidence or design Fiers missed the start in every series, including the 5 game/4 day extravaganza that featured every other A’s SP.

If the A’s rise to the #2 seed, they are now most likely to face either the Yankees or Twins.

With scary sluggers Aaron Judge, Gary Sanchez, and Giancarlo Stanton, HR leader Luke Voit, DJ LaMahieu (batting .367), and Gio Urshela now all in the lineup and batting right-handed, you would expect the Yankees to be “LHP killers”.

Perhaps partly because Judge, Stanton, and Urshela have missed appreciable time, the Yankees really don’t have significant team splits (.677 OPS vs. LHPs, .680 OPS vs. RHPs). You could make a case they are now much more potent against LHPs, or you could posit that splits aren’t the biggest consideration.

I rule out Fiers against any team that tends to launch 5 HRs in an inning. Meanwhile, Montas has given up 4 ER or more in 4 of his last 5 starts while Manaea has been gaining velocity and pitching consistently well, having allowed 3 ER or fewer in 6 consecutive starts.

In 4 career starts against the Yankees, Manaea has been solid: a 3.65 ERA in 24.2 IP, with 8 BB and 24 K. I may be way off on this one, but my gut says that if Oakland draws the Yanks in the first round, they will roll with Luzardo-Bassitt-Manaea.

The A’s weren’t willing to risk Fiers in a one-game showdown, but possibly in a 3-game series they would take his predictability over what is behind Montas’ door #2. I could honestly make a case for any of Manaea (my choice), Montas, or Fiers, but I am going to suggest that is the one opponent that could open the door for Fiers to earn a post-season start in the only chance for Oakland to pitch him at the Coliseum, where his fly ball/pop fly tendencies play well. Fiers-Luzardo-Bassitt, maybe with Fiers asked to go just 5 IP ahead of Petit, Diekman, and Hendriks.

If the A’s rally to land the #1 seed, they could see Cleveland or Toronto.

I will predict this matchup would yield a rotation of Bassitt-Luzardo-Montas.

This makes for a simpler call of Luzardo-Bassitt-Manaea in a showdown against the Candian team from Buffalo.

Knowing how my predictions and $4.50 can get you a latte, you should fully expect the actual first round rotation to be Mike Minor, Daniel Mengden, and a bullpen game, but feel free to add your thoughts, agreements/disagreements, and predictions to the thread! Some possible areas to cover in your comments:

- Do you agree with the premise that Bassitt and Luzardo are now locks?

- Do you think L/R split considerations will factor into the decision making?

- Do you think who the opponent is will factor significantly into who starts?

- Who do you see getting the ball and why?

- Does Cindi’s Bananas Foster Care really taste that bad? (It does)