STEVEN GERRARD killed speculation that Ollie Watkins could be on the move to West Ham stone dead in just two words: “Going nowhere”.

Hammers boss David Moyes has been linked with a big-money summer bid for 26-year-old England striker Watkins, to ease the burden on sole striker Michail Antonio.

But Villa boss Gerrard dismissed it as a total non-starter and said: “We love Ollie and really enjoy working with him.

“To take this club where we need to take it we need goalscorers, we need top players and Ollie Watkins is a top player.

“I will fight as hard as I need to fight if it ever comes up.

“But it’s not going to because I know the owners and I know Christian Purslow (CEO) and Johan Lange (Director of Football) are on the same page. 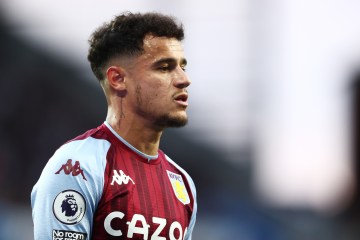 “We want to build this around the likes of Ollie Watkins. We are delighted with him.

“He’s our leading scorer this year so for me it doesn’t make sense at all to even listen to speculation about Ollie Watkins. It’s a straight no.”

But his 26 goals in 73 games for Villa since his £28million move from Brentford have led to interest from elsewhere in the league.

Watkins tops a three-man transfer shortlist at the London Stadium.

Southampton loan star Armando Broja is well-liked by Moyes, as is out of contract Arsenal man Eddie Nketiah.