For much of Saturday’s Iron Bowl matchup, it looked very much like the college football world would have the opportunity to witness a rare event when it comes to Alabama football: a two-loss regular season. But the Crimson Tide were the beneficiaries of the bonkers new college football overtime rules, which instituted a two-point conversion shootout beginning with the third extra period, taking down the rival Tigers 24-22 in quadruple overtime.

Despite facing a 6-5 Auburn team led by a first-year coach whose starting quarterback is out for the year (and whose backup, T.J. Finley, played through most of the game hobbled by a lower-body injury), Bama’s offense couldn’t get much going for more than 50 minutes of game time.

Quarterback Bryce Young, the Heisman frontrunner by default as a result of the award’s complete aversion to defensive players, was incredibly unimpressive, completing just 49% of his passes for 317 yards, two touchdowns and an interception, and a ground game that averaged less than two yards a carry didn’t do much to pick up the slack.

The Crimson Tide trailed 10-0 before kicking a field goal (which is never a good idea in this rivalry) with 8:44 left to avoid the first shutout of the Nick Saban era. It looked like Auburn was going to pull it out, as it held the Crimson Tide on a 4th and 1 attempt with two minutes remaining.

But Auburn couldn’t get the one first down it needed to win, and as any of the teams who have fallen victim to ‘Bama know, if you make one mistake against this team when it counts, you’re going to have a long ride home. The Tide quickly moved down the field, needing only 1:11 to tie the game with 0:24 second left on a dart from Young to freshman receiver Ja’Corey Brooks in the end zone.

"In a game as big as this, in a moment as big as this, to run that route and make that catch, that says a lot about him, his preparation, his hard work and the kind of player he is."pic.twitter.com/CPf8cTIh2J

The contest went to overtime, and the football gods granted Auburn yet another chance to embrace its destiny as college football’s patron saint of chaos. Alabama went down to score first, but the Tigers answered, giving coach Bryan Harsin the opportunity to go for the win with a two-point conversion.

But Harsin — who apparently felt confident in his team’s chances in another overtime period despite the fact that it was outgained 381-159 and was playing with a quarterback who was literally struggling to walk — had other ideas, sending out the kicker for a PAT. As college football writer Alex Kirshner noted on Twitter, this was quite a choice!

The two teams traded field goals in double overtime, bringing the new overtime rules into play for the third overtime. They traded two-pointers in triple overtime, but in quadruple overtime, Auburn finally ran out of house money. Finley couldn’t find his target in the end zone on a pass that was broken up, and a pass from Young to receiver John Metchie ended the upset bid.

It had already been a fairly wild day of college football by the time the 3:30 EST games kicked off, as Michigan snapped an eight-game losing streak to rival Ohio State with a stunning win in Ann Arbor to capture the Big Ten East division title (and shake up the College Football Playoff picture in the process).

An Alabama loss could have added some more chaos to the equation, but as we all should have known by now, the Crimson Tide never lose when it would make things way more fun. 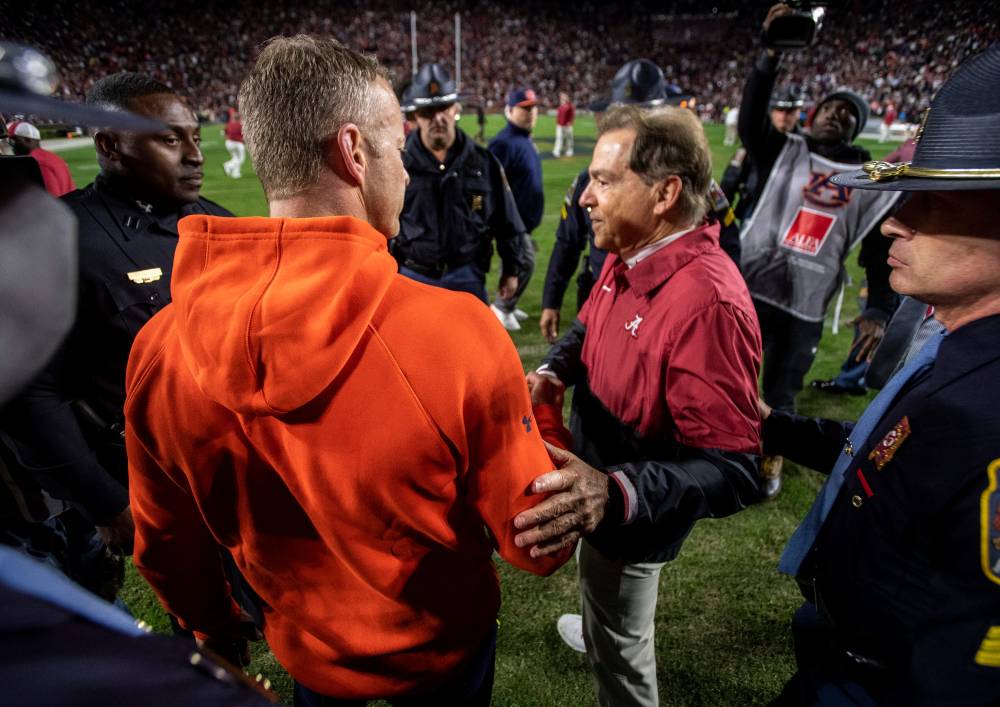