Only eight packs of wolves—numbering less than 100 in all—are known to roam in Yellowstone National Park, so it was quite a rare sighting when tourists traveling inside the park at around 10 o’clock at night came upon a pack of wolves strolling on the road ahead.

As Daryl Mckay and his companion slowly approached, the entire wolf pack appeared before them in their headlines in a sighting Mckay called on Facebook a “simply amazing and awesome experience.”

They were driving back from a day trip to Cody, Wyo., between Norris and Madison junctions on Highway 89 just before Gibbon Falls when the sighting occurred on the night of Sept. 11. They captured the video on their iPhone.

“We got to watch these beauties for about 15 minutes, including a lot of howling,” Mckay wrote.

The incredible sighting comes on the heels of Yellowstone National Park, in the winter of 2019-20, celebrating the 25th anniversary of wolves being reintroduced into the park.

The park reported an estimated 528 wolves resided in the Greater Yellowstone Ecosystem as of 2015, but as of January 2020, there were at least 94 wolves in the park and eight wolf packs were noted.

In general, wolf numbers have fluctuated between 83 and 108 wolves since 2009, the park notes, adding that they inhabit most of the park with their peak activity at dawn and dusk. 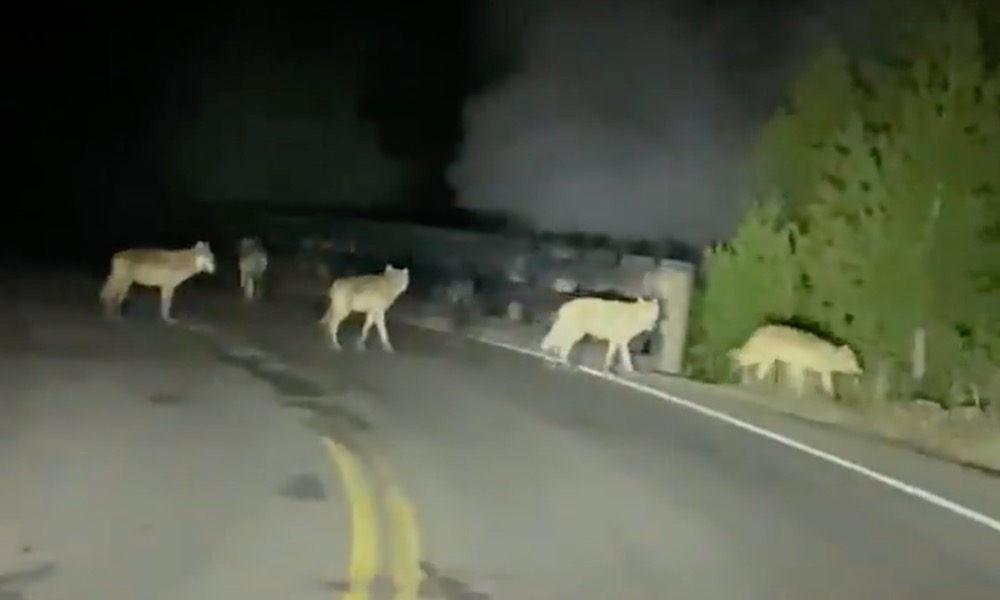 These tourists just happen to catch them at the right time. In fact, it was quite the wildlife adventure for Mckay and his companion, as he also posted video of a grizzly bear, a bull moose and a large bison strolling down the road in what he called a “classic Yellowstone traffic jam.”

Also on FTW: Watch as a bear gets touchy-feely with a shocked jogger