Just underneath the surface of the coy and upright Brit is a "pants off, trousers down, isn't life a scream" anarchist. Avoid the canoes and try a spot of wild swimming this summer.

Wild swimming takes some pluck. But once you have found your deserted pool, disrobed and plunged in…well, it’s rather a lot of fun. If you’re not afraid of Nessie, paddle through the wild lakes, hilly heaths and tucked-away pools that make up the extraordinary wealth of wild swimming destinations in this country. A slew of guide books can point you in the right direction, but try to avoid the terribly popular spots. Nothing worse than too many unidentified objects floating in the water alongside. After all wild swimming is suppose to be just that. Free, fun with a rather jolly frisson.

Charlotte Reather took on the challenge of baring all. Here is her wild swimming experience.

Wild swimming is very British. Few other nationalities relish taking a dip in water below 10°C. Well, apart from the Russians, epitomised by Vladimir Putin’s display of masculinity when he swam in a Siberian lake, bare-chested, of course. Vladimir’s muscle-bound torso aside, four million Britons swim in wild waters every year – in rivers, lakes, waterfalls and the sea. Many wear a swimming costume when wild swimming, others a wetsuit, but some opt for the simplicity of their birthday suit.

The majority of us avoid total nakedness at all costs. And our acute fear of embarrassment and disconnected view of our bodies, drummed into us by centuries of puritanism, Victorianism and Victoria Beckhamism, is not going to go away over night – especially as some couples still undress in the dark (or with the lights dimmed at least) while others wear more to bed than they do during the day.

So it would seem inconceivable that many of us have at some point stripped off and gone for wild swimming or skinny-dipping in front of other people. Perish the thought. It is such a typically British paradox that just under the surface of the coy, fearful and upright Brit is a “pants off, trousers down, isn’t life a scream” anarchist. This side of us can become apparent at social events situated near water. Wild swimming might happen at picnics by the river, summer house parties by the lake or barbecues on the beach are often perfect opportunities for a cheeky dip in the nude. The eight year old within us desperately wants to throw off the bonds of clothing and run free, straight into the water and splash about like a loon with total abandon and without shame. As the cold water covers our bodies from wild swimming, we feel alive. We are free.

Robson Green, star of Robson Green’s Wild Swimming Adventure, says: “Swimming starkers is completely normal and it’s totally exhilarating. Having the water in contact with your body switches you on.”

The image we tend to conjure of skinny-dipping is the group adventure under the cover of darkness. Habitually, this jape commences with someone having “a good idea”, which is revved up by group hysteria, protestations from the girls, persuasion by the boys and finally acceptance, followed by bacchanalian abandon and hilarity. Skinny-dipping and wild swimming in mixed company, of course, has an element of sexual rebellion to it but I think at its core it is rather childlike and innocent. It certainly isn’t a direct prelude to sex – a good dose of cold water soon banishes any intentions or ability.

It can also be an intensely private experience. Wild swimming remains a fairly common activity in rural areas, where an unwanted audience is rather unlikely. Kate Rew, founder of the Outdoor Swimming Society, says: “I prefer wearing a bikini in company but when I’m in remote, wild places in England there’s no point. It’s just me and the sheep.”

“There’s actually nothing unusual or upper class and twittish about taking a dip in the raw – it’s completely natural,” says Green. “It wasn’t so long ago that people wouldn’t take a second glance at others swimming naked.” Swimming suits had not come into common use and were not obligatory as they would become in Victorian Britain.

“Skinny-dipping was also a necessity for the working classes,” says Green. “Hundreds of coal miners in the North- east and tin miners in Cornwall would come out of the pits and swim naked in the sea. Many of them also went down to the lidos to wash. The middle-class bathers in their costumes would stare at these working-class blokes, butt naked, washing their bits. A man was quoted in a Fifties edition of the Chronicle as saying: ‘I couldn’t swim in the Tynemouth Lido anymore when the men were as crude in character as well as in clothing.'”

In Charles Kingsley’s The Water Babies, the hero, Tom the chimney sweep, is lulled into the water (the River Dart) by the fairies after he is wrongly accused of theft. Kingsley creates an underwater world for Tom and his friends away from the cruel one he was born into.

The water and wild swimming is not only a means of escape for Tom but also of purification. “Cold water purifies the mind and is psychologically beneficial,” says Green. “It can lift us from depression and fill us with euphoria. But you don’t enjoy the full effects of cold water unless it’s all over your body.” And research appears to show that regular immersion in cold water is thought to have health benefits including improved immune function, a decrease in inflammation and pain, and an increase in blood flow. 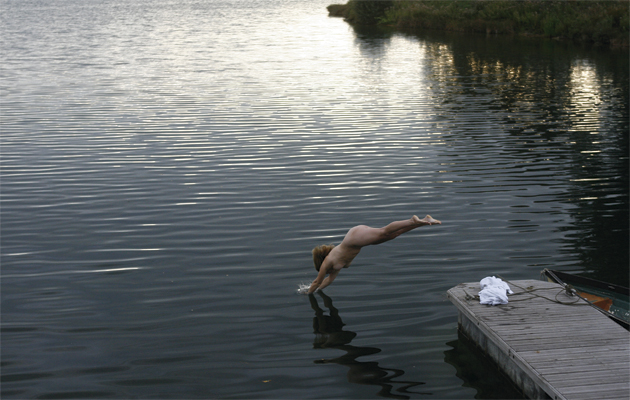 Taking the plunge – “when I’m in remote, wild places in England there’s no point. It’s just me and the sheep.”

However, as well as being a life giver, water can also take life away, and very fast. “Hypothermia happens very quickly. You turn blue and your brain turns to porridge – you lose your ability to think,” says Green, who suffered from hypothermia last year when he was wild swimming from the Northumbrian coast to Lindisfarne. Many of the symptoms are similar to being drunk, such as falling over, talking utter nonsense or shouting (usually associated with drinking blended whisky). It is very important not to put yourself or others in danger because of high spirits. “If you’re pissed when wild swimming, you’re likely to sink to the bottom and you’re not going come back up,” Green adds bluntly.

Kate Rew says, “It’s very important to know a bit about the water before you get in. Trust your instincts – if it doesn’t look right, don’t get in. You need to perform your own risk assessment first. Also, if you can, wear a brightly coloured swimming hat when wild swimming so people can see you in the water.” Green also believes that skinny-dipping is not as popular in the north of Britain as it is in the south, not only because of the ball-crunching cold but also because of folklore. “Instilled into the minds of children are monsters, frightening things,” he says. “The Loch Ness monster will eat you up or Jenny Greenteeth (in Cumbria) will pull children or the elderly into the water and drown them. As you travel farther north the fairy tales become more and more ridiculous.”

Of course these myths were perpetuated to keep unwary children out of the water. In this health and safety crazed era, perhaps Nanny and the police should create new stories of hoodies hiding in the river to convince us to not take a dip, although pollution, dead bodies and shopping trolleys are excellent urban deterrence already in use. If you are determined to take a dip in an overlooked location then brace yourself for an overreaction from the fun police.

In recent years, the tradition of Oxford students jumping off Magdalen Bridge into the Cherwell on May Day was banned. The bridge was closed and remains patrolled by security guards and police each May Day. And in 2007, accomplished swimmer Mark Davies sparked a major rescue operation on the River Severn. Three fire engines, 25 firefighters, and two rescue boats were involved, while about 200 people watched. He was arrested under Section 136 of the Mental Health Act but was later released after the doctor declared him sane.

Perhaps if you fancy wild swimming it is best to inform the authorities before they forcibly rescue you. You may also want to warn them that your nakedness is not intended to scare or offend so therefore it is technically not an act of public in-decency (although if you’re the wrong side of 45 you need to be honest with yourself and ask whether you may push people into an expensive relationship with their therapist after seeing you in the nude).

So, once you’ve informed the authorities, got your luminous swimming cap and chosen a spot, what do you do next? Well, you can either join a wild swimming club and swim with other like-minded people – although let’s face it, there’s bound to be one or two bearded water ramblers. But on the upshot, there are loads of hard-bodied athletes and the Outdoor Swimming Society has a mobile wood-fired hot tub to warm you up and socialise in after swimming. Alternatively, you need to hold a soirée at which you convince others to get involved. Beware, instigating skinny-dipping is a subtle art which you have to follow carefully or else risk being branded a pervert.

Thanks to the Editor of The Field, my first wild swimming adventure (save when my father threw me into the North Sea aged six) was diving into a lake in mid-October in order to secure this commission. It wasn’t a romantic or pleasurable experience in the slightest. I was standing starkers on the edge of a pontoon, duck poo between my toes, waiting for the “right light” for what seemed like an eternity before finally diving into the water, which was like being hit over the head by an ice-pick, punched in the chest and suffocated by a pillow all at the same time.

I described the experience to Kate Rew, who replied: “Sounds like you’re more than ready to join the Outdoor Swimming Society, Charlotte.” After a tough boys’ prep school grounding and life on the frontline of The Field, I say: “Bring it on!”

Kate Rew is the founder of the Outdoor Swimming Society (OSS) and the author of Wild Swim: River, Lake, Lido and Sea: the best places to swim outdoors in Britain (Guardian Books, £17).