Pontypridd travel to play Newport RFC in the Indigo Group Welsh Premiership on Friday evening 18th November, the match at Newport Stadium kicks off at 7:30pm.

Friday’s match will be Ponty’s third visit to the Black & Ambers’ new home in just over a year, and the Valley Commandos will be hoping it’s ‘third-time lucky’ having lost on both previous occasions we visited Newport Stadium last season. However, Ponty will take confidence having beaten Newport, who were arguably last season’s stand-out team, twice at home last season – once in the league and once in a pre-season friendly.

Ponty have made four changes, two in the backs and two in the forwards from the team that started last week’s match against Merthyr. Behind the scrum Matt Bancroft comes into the side at outside-half and Ceri Morris starts in the centre. In the pack Tom Harper is drafted back into the XV at tight-head prop along with Aled Ward who starts at no.8.

On the bench Mitch Barnard, Matthew Lewis and Alex Lloyd are all recalled back into the matchday squad.

The Pontypridd team selected to play Newport is as follows:

Ponty supporters can purchase their tickets prior to the match online via the following link – Tickets – NEWPORT RFC (blackandambers.co.uk) – They are priced at £14 adults, £10 concession and U16’s gaining free entry. Just to note, you’ll still be able to buy tickets on the gate Friday evening if you wish.

There will be food and refreshments (alcoholic and non-alcoholic) available in the ground throughout the evening.

Newport Stadium is situated to the south of the city. For those travelling by car with sat nav the nearest post code is NP19 4PT and parking is available at the ground.

We look forward to seeing as many of you as possible on Friday to get behind the boys! Ole! 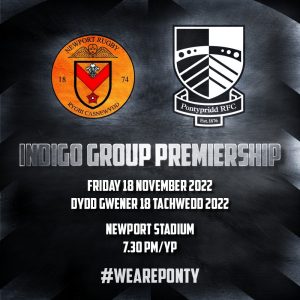