With the recent good news confirming the 2020-21 Abbey Insurance Ulster Rugby Academy squad, we caught-up with the Head of the Academy set-up, Kieran Campbell, to discuss his latest recruits.

“We are now in a fortunate position to have confirmation of the Academy squad, as well as the talented players who will be coming into our sub-Academy. We have seven players coming into the Academy and of those seven, six are indigenous to Ulster. That’s great to see because it is reflective of not just us, but the good coaching that is going on in our schools and clubs. It is also demonstrating that our pathways are working. Those six players from Ulster have been with us since U16 level and come all the way through to Academy level.

“What’s nice as well is that they are all from different regions of Ulster; they aren’t centric to one region. Different schools are represented too, which shows our talent identification and development in the different regions are improving.”

The former Ulster and Ireland player also stresses the importance of the sub-Academy and relationships with clubs to the progression of young rugby talent.

“Ethan McIlroy and Lewis Finlay demonstrate why the sub-Academy (now called PTS1 by the IRFU) is so important, as well as our relationship with clubs, because those two players have emerged from being in our sub-Academy, but have also been playing club rugby to achieve positions in our Academy.

“The routes are not straight-forward or linear, and everyone has a different pathway. It’s great we have four players coming straight from school, and two who have come in locally from the sub-Academy and club pathway.”

As well as local talent, Campbell and his team have been astute in recruiting Irish-qualified prospects in recent years.

“We’re getting really good Irish-qualified additions. 86% of our Academy is home-grown now with important additions like Hayden Hyde who has been brilliant for us since coming from England.” 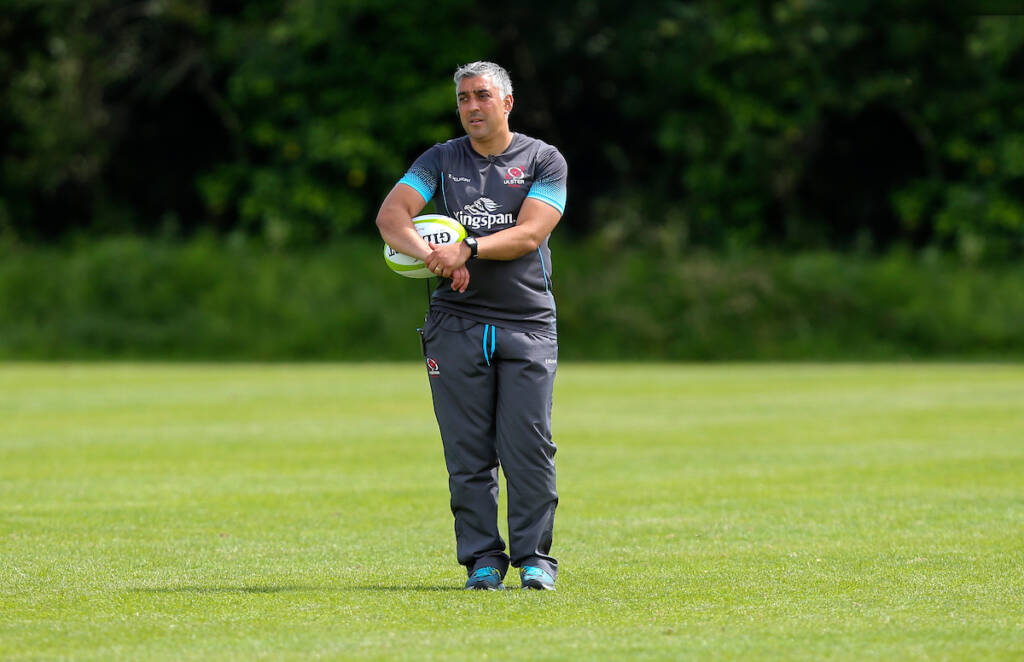 Three of the seven Abbey Insurance Ulster Academy new entrants come into the Academy following a successful Schools’ Cup campaign with Wallace High School, which Campbell puts down to the school’s coaching set-up. 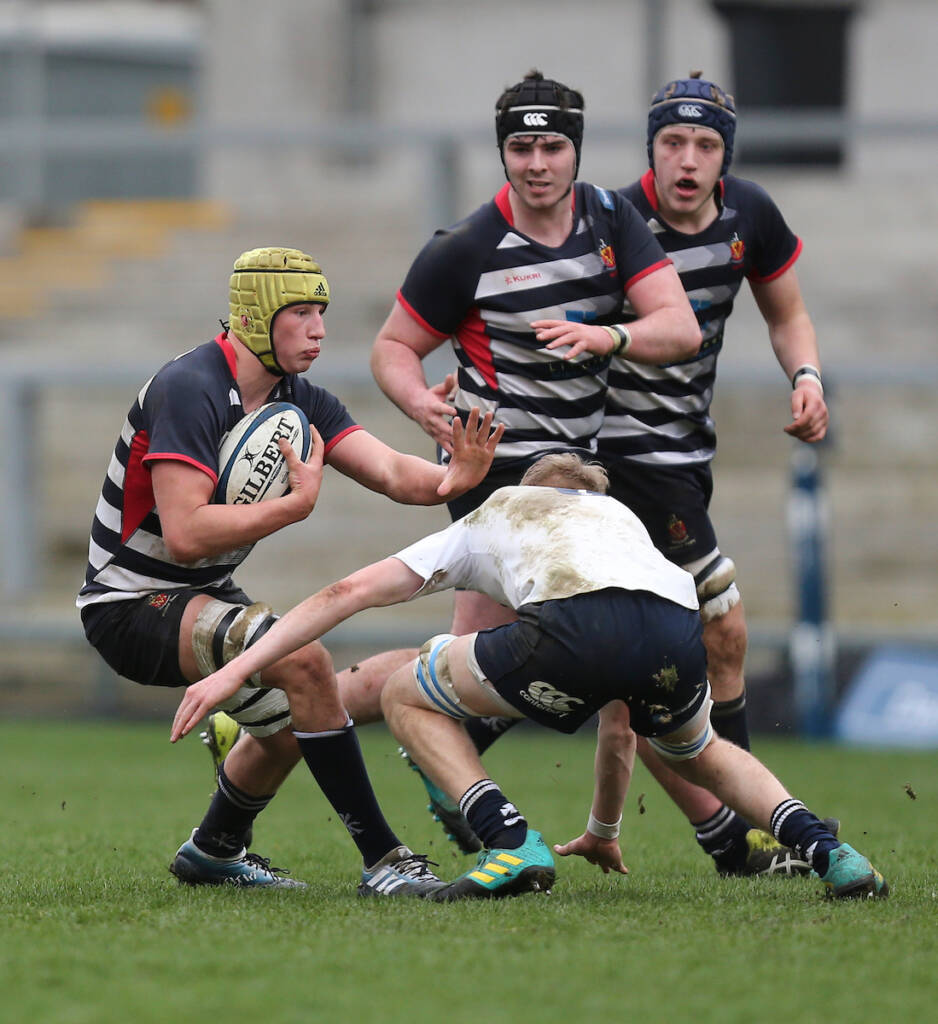 “Reuben Crothers is an out-and-out seven; an excellent tackler and superb at turning opposition ball over. He’s a hard-working seven who is extremely dedicated to his team and one thing that is very strong in his makeup is his leadership. He was captain at Wallace High School and he also skippered Ulster U18 Schools and U19s a year early. He brings a really high work ethic and will bring real leadership qualities too. 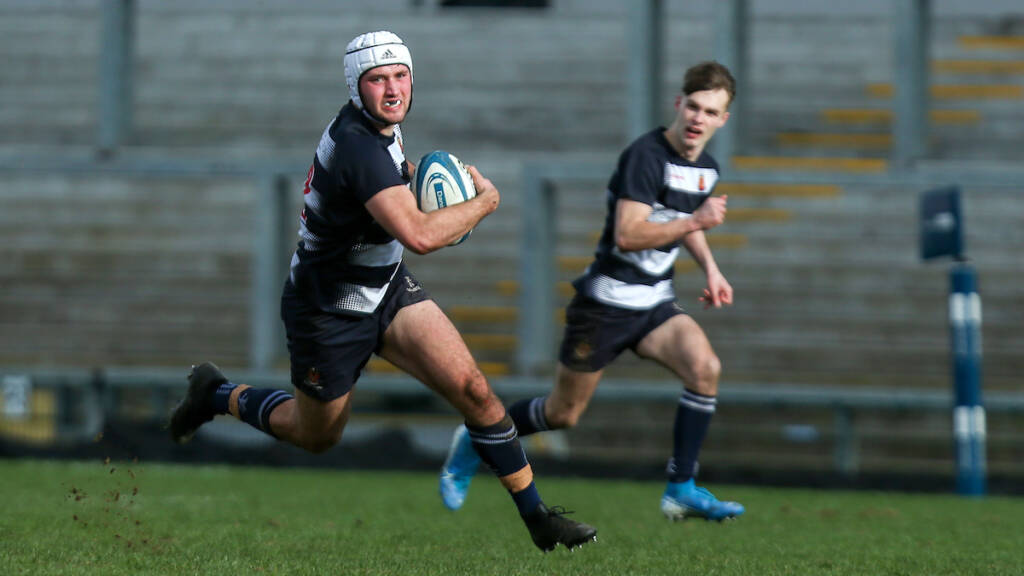 “Ben Carson is a big, physical centre. He is a very well-rounded player who carries the ball well, but has a good passing game and is an effective kicker with his left foot. He brings a physical profile but also a good skillset to his position and into our Academy. 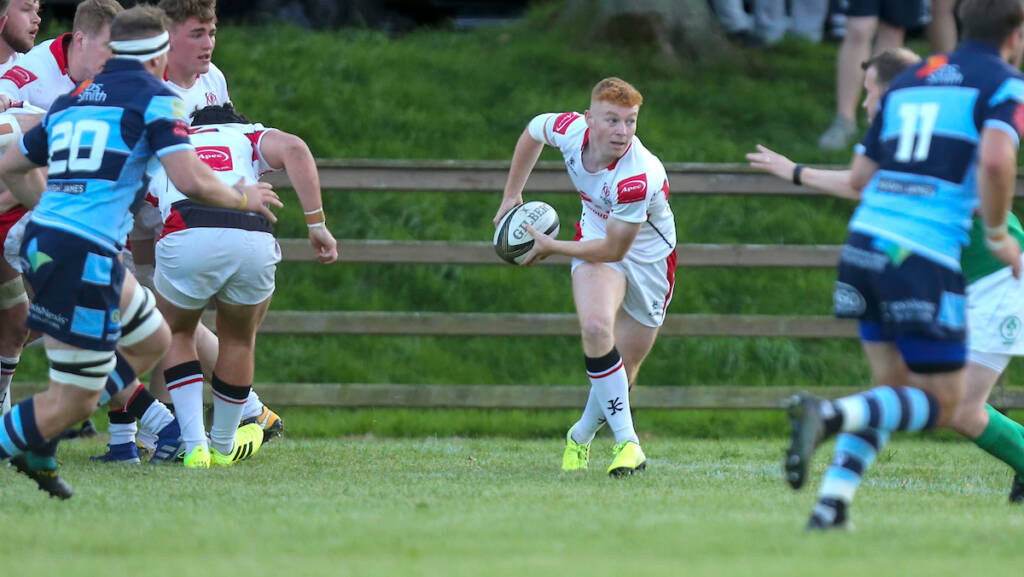 “Nathan Doak’s acceleration speaks for itself. He has played a year already at Celtic Cup level as part of the Ulster A team, which reached the Celtic Cup final. Nathan is an exceptionally good reader of the game. His game understanding is excellent for such a young boy, and he comes with an excellent pass and his kicking game is strong. Another addition to Nathan’s game is that he’s such a strong goal-kicker as well.

“We can’t take the credit for all these players; full credit has to go to Derek Suffern and Neil Hinds at Wallace High School for the system they run there. That’s reflected in the quality of the players joining our programme.” 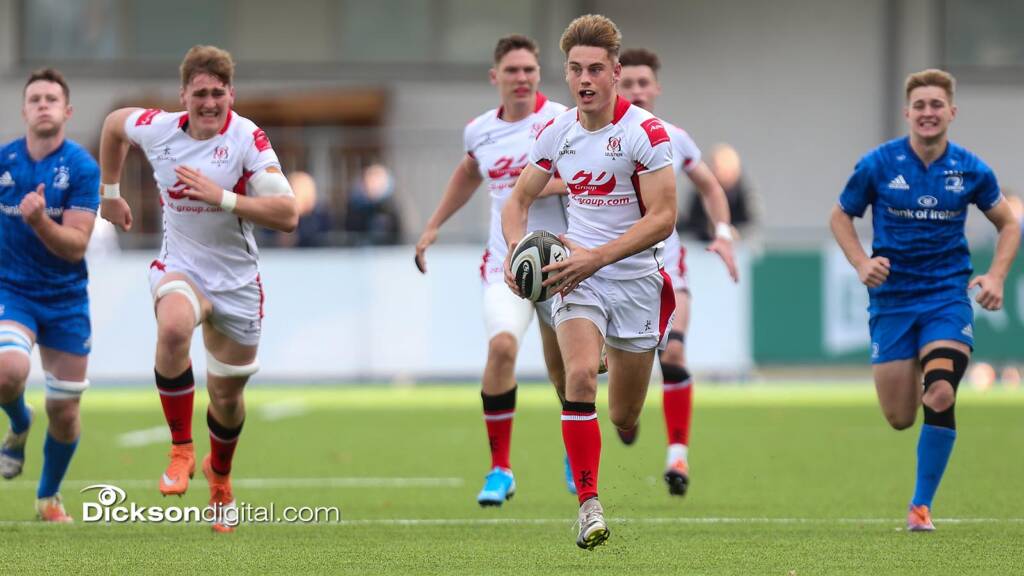 Former Methody Schools Cup-winner and winger, Ethan McIlroy, has been promoted from the sub-Academy.

“Ethan McIlroy is a different type of player. He’s a little bit of a maverick; I don’t know if anyone saw what he produced against England U20s in the Six Nations, throwing a ball out the back of his hand for Hayden Hyde to score. It’s one of those moments as a coach when your heart is in your mouth but he’s a highly talented rugby player. In his back three position, he’s strong aerially and carries the ball really well considering he isn’t at the physical potential he can be yet. He’s come out of a strong schools’ system in Methody with Nicky Wells, and the skills Ethan brings as a real game-breaking player are pretty exciting.” 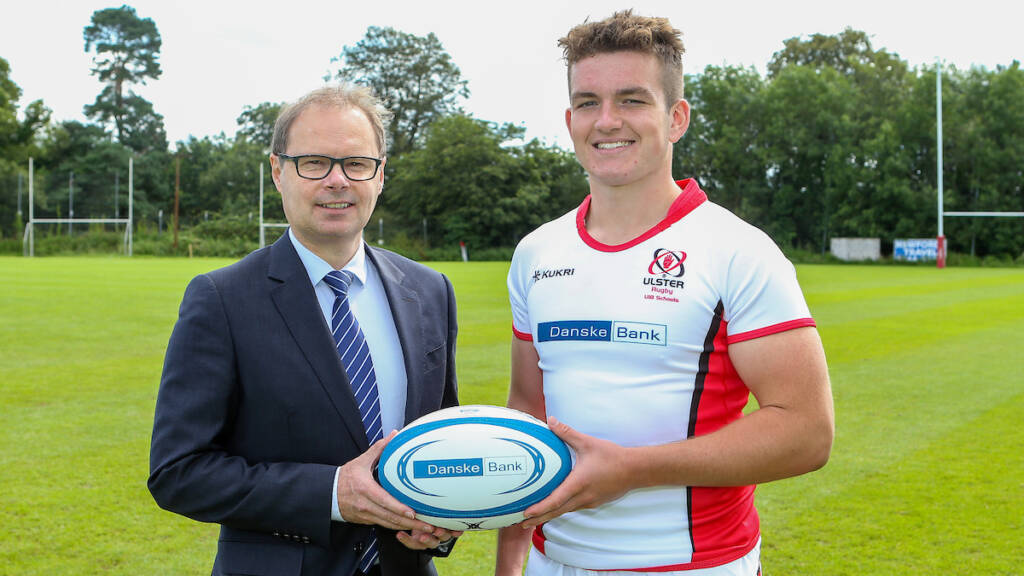 Versatile forward, James McCormick, who is also an effective goal-kicker, played at Dalriada School, where his development earned him a place on the Academy, according to Campbell.

“James McCormick has captained our Ulster U18 Schools and is a real credit to Dalriada, which is a good school and run an excellent programme; they have done an exceptional job with him. He is a good scrummaging hooker with the potential to be very good. His throwing is very accurate and for a young guy, he’s really tough and dynamic. We’re excited about James; he is another one who has a special leadership quality reflected in how he owns his own development and he always striving to get better. He is a quiet, unassuming guy but there is a real toughness to him.” 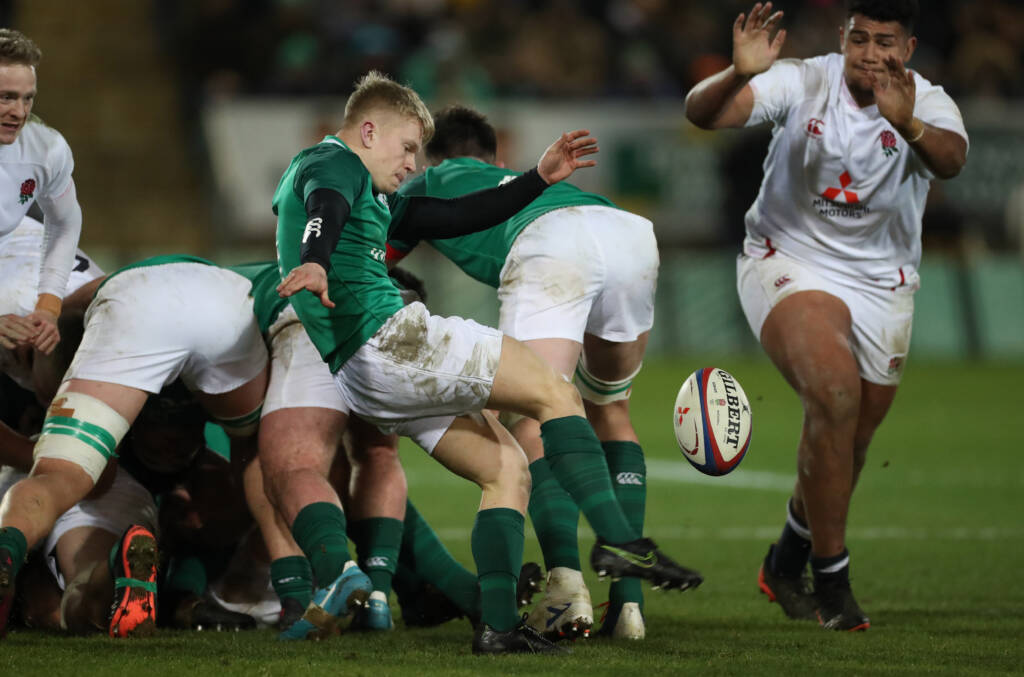 A former scrum-half himself, Kieran Campbell, is particularly excited by Irish U20 International, Lewis Finlay, who shone at half-back in the 2020 Guinness Six Nations before COVID-19 led to the postponement of the competition.

“Lewis Finlay, I can’t speak highly enough of. He is one of the players who invested in our sub-Academy for the last 18 months and his dedication is second-to-none. His acceleration in his own development and the ownership he has taken of it demonstrates that he is a real leader; he was in the leadership group in the Ireland U20s team. What Lewis brings is tempo, he has got an excellent pass, is extremely fit and quick between breakdowns. He also possesses the ability to break the line, but I think the real growth in him – and it has been totally down to him and his dedication to what he does – is his game understanding. He has been really good at delivering tactically for the team. We are fortunate with him and Nathan and Conor McKee in our sub-Academy, as we have three really good nines who are going to be battling hard. It’s great to see a home-grown set of nines waiting to get into that senior squad and hopefully nail down a permanent position.” 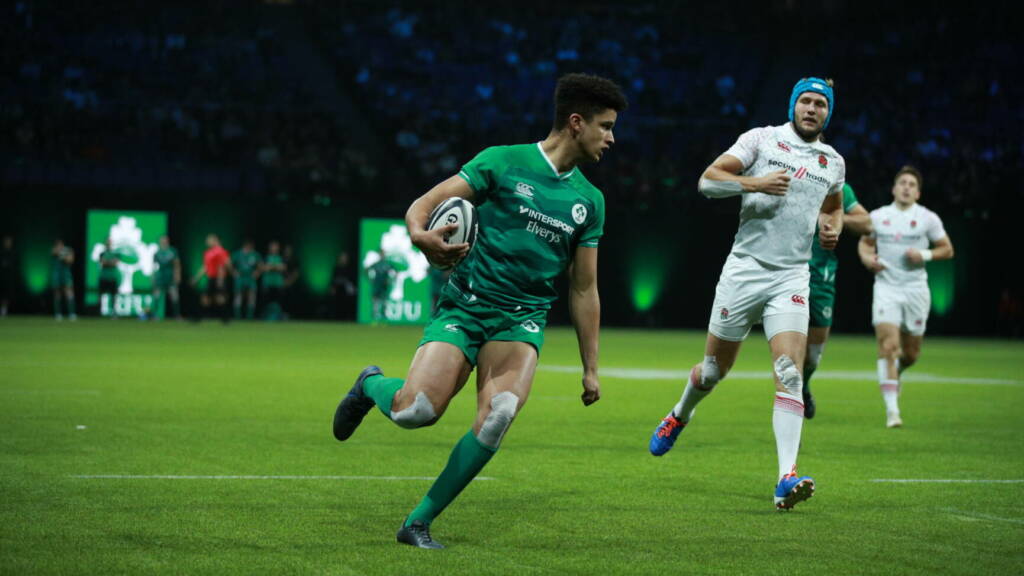 Cormac “Izzy” Izuchukwu, a towering but quick second row from Tullamore in Co. Offaly, was selected for his raw talent and athleticism demonstrated at international Sevens level, says Campbell.

“Cormac Izuchukwu or “Izzy” as he likes to be called is coming in and we have had support from Operations Director, Bryn Cunningham, and our senior coaches with that recruitment. He has come in as part of our succession planning to compete with two local players in our sub-Academy, Matthew Sands and Cormac McMenamin. There will be a healthy competition now to push those guys on and Izzy will be a welcome addition with his athletic profile. It’s well documented now, but he’s 6’ 7” and extremely quick coming out of the Sevens programme.

“I’ve worked with Izzy in the Irish U20s and Sevens and there’s no doubt he is a gifted athlete. He is a really good person too. We need to hone that raw ability and there are areas he is working very hard on in lockdown at the moment, such as lineout calling which I commend him for. He is working exceptionally hard with our coaches, Michael Black and Jonny Graham, on that at the moment and he has taken ownership of that himself. Once we combine that athleticism with positional role delivery, he is going to be a really strong acquisition for us.

“Character is hugely important for us, and it played a large part in each of those seven players making our Academy.

“I think we are in a strong position, so I am pretty delighted with the squad we have compiled for going into the 2020/21 season.”