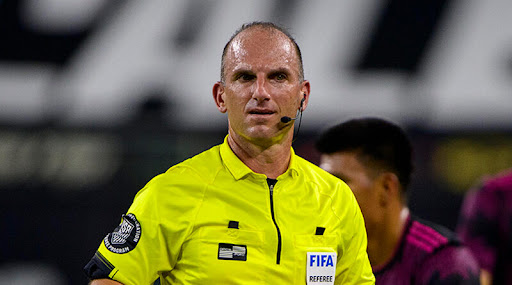 The PRO referees did not exactly cover themselves in glory on Decision Day and the most egregious example is probably in the SKC vs RSL game where a handball in the box was missed by Ted Unkel, pictured above trying to figure out if he pooped himself or not, and then was reviewed by VAR and apparently deemed to not be clear and obvious. Assuming the tweet doesn't get taken down, you can view the video here: SKC Twitter Handball. Even worse, the game winning goal for RSL had what looked to be a pretty clear offsides that did not get called, watch yourself: RSL vs SKC highlights. For his part, Peter Vermes is big mad and seems to be claiming that there is a conspiracy against SKC which is...rich given some of the non-calls SKC has gotten lately. While Vermes is clearly delusion if he thinks that SKC is treated unfairly by the referees, he does have a point that the referee situation is terrible right now in MLS and seems to be getting worse. Those two non-calls mean that the LA Galaxy are out of the playoffs and prevented SKC from being top of the west. Sure, the LA Galaxy didn't get to that desperate situation solely because of one bad referee call, but both SKC and the LA Galaxy do have reasons to be pretty grumpy about it. MLS has to ensure that the referees are going to VAR, reviewing on video if necessary even if it delays the playoff games a bit, because while I like a quick call I like a correct call much, much better. Anyway, let's try to predict the playoffs now and probably fail at it.

The Red bulls barely squeaked into the playoffs on Decision Day thanks to a very narrow draw at Nashville. To a certain extent, that has to give the Red Bulls confidence that they can go anywhere and get a result, but realistically the Union are the better team. Philly haven't lost since their narrow 0-1 defeat to the New England Revolution on September 3rd and I don't think they're going to lose now.

Bizarrely, Nashville is both simultaneously the team I think most likely to be able to beat the New England Revolution and is most likely to go out of the playoffs in the first round. Nashville has a habit of getting a draw a lot this season, in fact 18 (?!) of their games have resulted in draws. Orlando City may or may not have a healthy Nani, if they do I think they have a good chance at upsetting Nashville, if not I think they're really going to struggle. So...who loses? I kinda don't know, but I'm taking a stab at it.

Who is doomed? Nashville SC

Atlanta United have been on fire since head coach Gonzalo Pineda took over after leaving the Sounders and my heart really is rooting for this team (as long as they're playing in the Eastern Conference in these playoffs) as it would be a great result for Pineda. However, NYCFC have only lost at home twice this year, once to New England and once to cross-town rivals the NYRB. As great as it was for Atlanta to make it back to the playoffs after some (metaphorical) time in the wilderness, I think this is where the run ends.

Who is doomed? Atlanta United

RSL needed a whole lot of help to get into the playoffs and really they probably shouldn't be here (see above) but all of that is water under the bridge for RSL. RSL are a legitimate threat on the counter, with a lot of young players that can really run at you. Add in that the Sounders have some serious injury concerns and this seems to be a recipe for an upset. But even with all of that, the Sounders are still a very talented team and RSL are very vulnerable at the back.

Who is doomed? Real Salt Lake

On paper, Kansas City are clearly the better side to the Vancouver Whitecaps, they've played better, their roster is more complete and they've been good all year long. However, Kansas City, as they often do towards the end of the year, have not been looking quite so great. Add in that the Whitecaps have been on a tear, with Brian White scoring a bunch of goals and they play exactly the sort of direct style that can counter SKC's high press. If there's going to be one upset in the west, I think this is it.

Who is doomed? Sporting KC.

In theory, this is the upset match of the west, but that's just in theory. Minnesota won both of their games against the Timbers, home and away and so clearly they can do it again right? But both of those wins were months ago, the away win was back in June when the Timbers were struggling. This is a much better Timbers team, and Minnesota had a real chance of missing the playoffs completely on Decision Day, so they aren't quite so good as they were when they beat the Timbers. Add in that Providence Park is going to be deafening and I think the writing is on the wall for the Loons.

Who is doomed? Minnesota United.