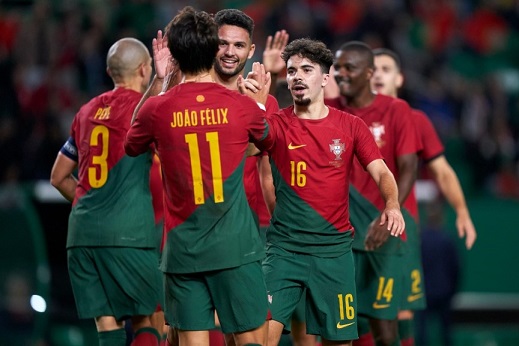 The Seleção enjoyed the perfect preparation match for the FIFA World Cup 2022 by beating Nigeria 4-0 in Lisbon tonight.

A vibrant first-half display translated into a two-goal lead thanks to a Bruno Fernandes brace.

After the break, late strikes by Gonçalo Ramos and João Mário completed the rout.

The hosts were straight on the attack, João Félix producing an air-kick after a quick passing move and Bruno shooting wide in the opening exchanges.

On eight minutes Portugal’s bright start was rewarded. João Félix sprayed a wonderful cross-field pass to the onrushing Diogo Dalot, who sprinted into the box, bided his time then laid on the perfect assist for Bruno Fernandes who slotted into the net.

Nigeria threatened to hit back with Bassey nutmegging Bruno but the danger was snuffed out. The lively Otávio was seeing plenty of the ball, the Porto man at the heart of a couple of moves penetrating deep into the Nigerian defence but which ultimately broke down.

Félix seemed in the mood for it and the Atletico Madrid man was close to a stunning goal midway through the half, his fierce effort from range narrowly clearing the crossbar.

A clever short-corner routine saw the ball shuttled from Bruno to Otávio to Mendes, whose cross was met by William but his shot was intercepted by a defender.

Nigeria responded, the lively Moses Simon manufacturing space for himself but shooting straight at Patrício.

Bruno at the double

On 35 minutes Portugal doubled their lead. Bernardo’s cross struck Osayi-Samuel’s arm and the referee immediately pointed to the spot. João Félix and Bruno Fernandes were both keen to take it, Bruno pulling rank with his seniority and duly dispatching the ball into the net with his trademark hop and skip.

Nigeria were asking questions of the Portugal defence with their rapid front men, but Silva and Dias at the heart of the defence were dealing well with the danger.

Just before half time Portugal – and Fernandes – almost made it three. A sumptuous pass by Félix was arrowed perfectly towards the diagonal run of Bruno, the Manchester United man taking a touch to round the goalkeeper but unable to direct his shot on target from a tight angle.

Pepe on the comeback trail

Santos made four changes at the break Pepe, Raphael Guerreiro, João Mário and Vitinha entering the fray, coming on for four certain starters against Ghana: Dias, Mendes, Bernardo and Bruno.

The introduction of the Porto centre-back was especially significant. Pepe is trying to regain match fitness after making his comeback in a five-minute cameo in the Dragons’ victory over Boavista on Saturday night, after over a month out injured.

With Nigeria also making changes, the start of the second half was disjointed as both teams struggled to find their rhythm.

Patrício to the rescue

António Silva made a great tackle to stop Samu Chukwueze in his tracks but the Villarreal forward got his revenge later in the half, a brilliant turn leaving Silva for dead and a goal seemed certain as he bore down on goal, only for Rui Patrício to deny his with a superb save.

Félix then got in the thick of it again, twice coming close to scoring, his first shot drawing a sharp save out of Uzoho and his second effort skidding just wide.

For a worrying moment Otávio was briefly on the turf after coming off worse in a midfield tussle, but although the Porto man was soon replaced he did not look in any significant discomfort.

With 10 minutes remaining Nigeria had a golden chance to pull back a goal. Dalot barged down Samuel after a high-speed footrace, the referee initially awarded a free kick on the edge of the box, but VAR upgraded the offence to a penalty. Patrício, who like his successor in the national team, Diogo Costa, has a reputation as a penalty-saving expert, pulled off another terrific stop, diving to his right and touching Dennis’s spot kick onto the post.

Finishing with a flourish

The save aroused the crowd and they were soon cheering even louder as Portugal went straight down the other end of the pitch and made it 3-0 through a goal fabricated by the substitutes. Vitinha and Guerreiro did the spadework, leaving Ramos with the simplest of tasks to slot into an empty net for a goal on his international debut.

3-0 soon became 4-0 with the goal of the night. Guerreiro dinked a high ball over the defence to Félix, who showed a delightful touch to control the ball and find Ramos, who in turn cleverly backheeled the ball to João Mário who couldn’t miss.

By Tom Kundert, at the José Alvalade stadium