KEVIN Federline has fans worried, after the former dancer looked disheveled and out of sorts at his daughter’s soccer game.

Britney Spears’ ex husband was also caught smoking a cigarette near the kids, as the war between the former lovers drags on.

Kevin Federline looked disheveled as he took a smoke break outside of his daughter’s soccer match[/caption] The former dancer shares six children with three women, including ex Britney[/caption]

Over the weekend, Kevin was spotted cheering on his daughter, Jordan, at her soccer game in Los Angeles.

The 44-year-old was joined by his current wife, Victoria Prince, and his parents.

Kevin shocked onlookers with how much he seemed to have let himself go recently.

The man once known as K-Fed wore a black shirt to hide his bulging gut.

He coupled that with a pair of black shorts and flip flops.

The father of six had his hair messily tied back, as he drank water and puffed on a cigarette just off the pitch.

Kevin and Britney have been at war ever since the pop superstar’s ex-husband dropped the bombshell that their sons no longer wanted to see their mother.

Most read in Celebrity

'OUR QUEEN IS HOME'

Kate Moss, 48, wows in fishnets for campaign with daughter Lila, 19

In the midst of their heated, and very public, family feud, an Instagram account claiming to be Kevin shared three alarming videos.

In the first, a child, whom he claimed was one of their sons, can be heard saying: “You come in here when we’re trying to go to bed and you just say…”

A shadowy figure – allegedly the Circus singer – interrupts, yelling back: “It’s my house. If I want to come in here and give you lotion for your face because it’s coarse and all you tell me [is] ‘no, it’s fine. It’s fine.'”

As her face turned and became more visible to the camera, she continued: “You all better start respecting me, do you hear? … you all need to start treating me like a woman with worth, OK? I am a woman. Be nice to me.”

Kevin watched the game with his wife, Victoria Prince[/caption]

In a second video, filmed in a vehicle, a woman who looks like Britney can be seen sitting in the front passenger seat.

The woman continued: “I don’t know what to say but I do care more than you know. My little body can’t handle all of that. It’s like sometimes I just don’t even know what to say with you. I was in shock and I do care.”

A boy, believed to be Sean, responded: “If you really care you wouldn’t take my phone away.”

The woman quipped back: “I was in shock when I looked down in the story and – Jayden, how are you so cool about that? Your brother, baring his big feet – size 13 – in an ice cream shop in Alaska weather?”

The third video appeared to be a continuation of the second.

In it, the woman inquired: “Are you wanting attention, baby? Is that what this is?”

Kevin’s parents were there as well.[/caption]

In the caption, the account holder – allegedly Kevin – wrote: “I can not sit back and let my sons be accused in this way after what they’ve been through.

“As much as it hurts us, we decided as a family to post these videos the boys took when they were 11 & 12.”

He went on: “This isn’t even the worst of it. The lies have to stop. I hope our kids grow up to be better than this.”

As part of her custody agreement with Kevin, Britney is entitled to see sons Sean, 16, and Jayden, 15, 2-3 days a week.

Recently, however, they began only coming over for a day, if at all.

Even then, they were distant to their mom, she claims.

In a series of posts, she accused her sons of “abandoning her” and being “hateful” as she begged them to love her again.

“It’s hard for me to let go of things I truly love … like my kids,” the pop star wrote online.

She then focused her attention on Kevin, attacking his attempts to represent his side of their relationship as the “perfect Brady Bunch family.”

According to Britney, she alleged that Kevin’s home has “more weed than Ludacris, 50 Cent, Jay Z and Puff Daddy combined !!!”

Kevin lives in Los Angeles – where marijuana is legal.

She concluded her lengthy post by saying her heart is broken, with the realization that “cruelty does in fact win.”

Read More on The US Sun 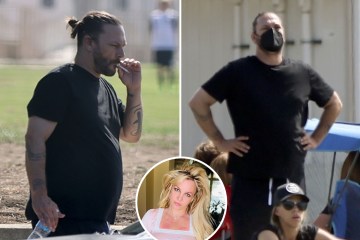 “I can’t process how I dedicated 20 years of my life to those kids … everything was about them !!! For them to knock the breath out of me … see you can’t fix me !!!

“No therapy or sense of worship can fix my heart !!!”

Shooting
23 Mar 2022 22:29TheSun.co.uk
Possible ‘active shooter’ at Tanger Outlets in Arizona leaves 1 hurt with mall on lockdown as terrified shoppers hide
Short track speed skating
15 Feb 2022 08:24Thedailybeast.com
Mom Preps for War as She Watches Son Race for Ukraine at the Olympics
Judo
09 Jan 2022 16:00Ottawa Judo Club
All classes will be virtual due to the latest government restrictions.
Weightlifting
04 Jan 2022 20:00Lifehacker.com
What Is Powerlifting, and How Do You Get Into It?
Sponsored