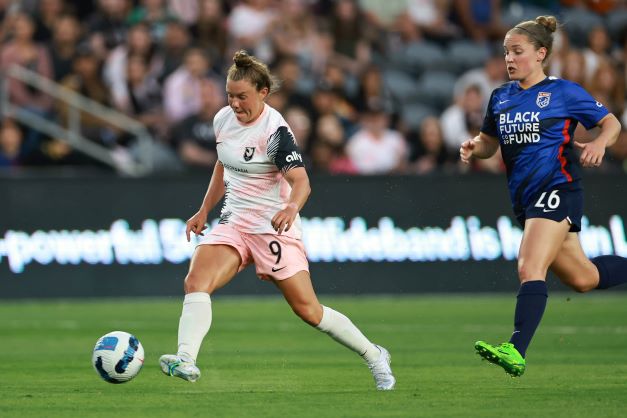 Photo courtesy of Angel City FC.
Savannah McCaskill, left, gave the 22,000 fans at Banc of California Stadium a lot to cheer about in the first half on Saturday night.

It truly was a tale of two halves at Banc of California Stadium on Saturday night.

The first half belonged to Angel City FC, as they got the goals, the bounces and the saves, especially one crucial save from the penalty spot just before halftime. It looked like it was going to be Angel City’s night to get the three points and move themselves up in the NWSL Standings.

The second half however was a far different story. OL Reign came alive in a big way, controlling possession throughout the half, and it paid off. OL Reign scored three unanswered goals throughout the half, with the goals coming from Jess Fishlock, Sofia Huerta and Tobin Heath, and OL Reign finally won a game on the road this season, coming from two goals down to shock Angel City with the 3-2 result.

“We weren’t really building out of the back, it felt frantic,” Midfielder Cari Roccaro said of Angel City’s performance in the second half. “I felt like we weren’t keeping the ball, and because of that, I felt like I was defending a lot and getting tired. I think the whole team kind of felt like that.”

The result meant the OL Reign (5-3-5, 20 points) moved into a playoff position, as they moved into a tie with its rival Portland Thorns for third place. Angel City (5-5-2, 17 points) are currently on the outside looking in, though they are just one point behind the Kansas City Current.

Trailing 2-0 early in the second half, OL Reign was looking for any opportunity to get themselves back in the match, and it came during the 54th minute. Jess Fishlock passed a ball to Tziarra King, Fishlock ran into the penalty area and King managed to find her in the box, Fishlock took a touch before firing a curling ball that got past keeper Did Haracic, hit off the far post but went across the goal line.

OL Reign came alive from that point on. OL Reign tied the match in the 64th minute, as Angel City cleared a corner kick out of the penalty area, but the ball found the foot of Huerta, and she then launched left-footed volley just outside the penalty area that sailed past Haracic and going into the upper left corner for the equalizer. OL Reign pushed all its chips in in the 84th minute, as Tobin Heath entered the match, then five minutes later, made her presence felt. Huerta and Jordyn Huitema worked a one-two that ended with Huitema playing Huerta into the penalty area, Huerta crossed to the top of the six-yard box and an unmarked Heath one-timed a shot past Haracic into the back net to complete an unlikely comeback for OL Reign.

“Our movement stopped in the second half, we lost that ability to possess and move the ball,” Angel City head coach Freya Coombe said. “Our spaces that we were looking to defend in the midfield got really large and they were able to find their players in those spaces. That was a big contributing factor as we weren’t able to get compact enough and defend the space.”

Such a situation would’ve been considered a fantasy considering how the first half went. Angel City jumped ahead in the ninth minute. Savannah McCaskill led an Angel City break dribbling down the middle lane, McCaskill played Clare Emsliei into the penalty are, and she attempted a shot almost from the same spot where she scored the game-winning goal against San Diego Wave FC three weeks ago. Emslie’s shot was saved by keeper Phallon Tullis-Joyce, but she left a rebound just outside the six-yard box and Roccaro tapped in the rebound chance past Tullis-Joyce and Huerta for her first ever NWSL goal.

“It was a long time coming,” Roccaro said. “I am so glad I did it in the Banc in front of our amazing fans. That felt really special. I hope I score another one soon.”

Angel City got a chance to double its advantage starting in the 26th minute. Madison Hammond sent a long ball that eventually went inside the penalty area, Angel City’s Sydney Leroux and OL Reign’s Alana Cook both raced to get to the ball, both players bumped each other, but Cook them clipped Leroux from behind in the box, and Angel City was awarded the penalty. Two minutes later, McCaskill stepped up to the spot, and converted the penalty, going to her right while Tullis-Joyce went the other way.

“In the first half, we were able to move the ball and break the pressure,” Coombe said. “We were also able to take a little bit of risk. Our first and second goal gave us the ability to relieve pressure through their press along with some great balls from Savannah McCaskill.”

It was just the goals that were going Angel City’s way in the first half. OL Reign had its first chance in the 32nd minute, as Fishlock fired a right-footed volley from just inside the penalty area that hit off the crossbar and bounced inside the six, Huitema charged in to try and head a ball into an open net, but Haracic recovered just in time to snatch the ball away in midair to deny Huitema the goal. OL Reign though for sure they would get onthe scoreboard just before halftime, as Huitema played Fishlock into the penalty area, Jun Endo and Megan Reid closed in on Fishlock, but Endo pushed Fishlock down and OL Reign were given the penalty. Kim Little stepped up to the spot, looking to give OL Reign what could’ve been an energizing goal right before the half, but Haracic came through for Angel City, guessing right on Little’s penalty and Angel City cleared the ball out of the penalty area.

Angel City will try to bounce back next Sunday, though it won’t be easy, as they travel 3,000 miles to Central Florida to face the Orlando Pride.

The post OL Reign comes from behind to stun Angel City appeared first on Prost Amerika.