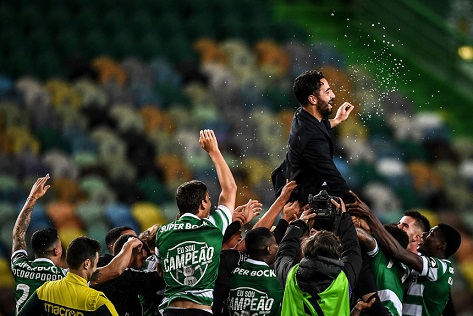 In less than two years as a top-flight head coach Rúben Amorim won the league cup at Braga, led Sporting to their first championship triumph in 19 years (in addition to winning the league cup again) and has now steered the Lions into the Champions League last 16 for only the second time in the club’s history.

When you factor in the tumultuous situation in which the Lisbon club were mired when Amorim was recruited, his achievements are nothing short of miraculous. PortuGOAL profiles Portuguese football’s man of the moment.

Rúben Amorim was appointed head coach of Sporting in March 2020. Amorim won the Taça da Liga again and led Sporting to their first Portuguese League title in 19 years. This season Sporting are joint top of the table, have made progress in both domestic cups and yesterday booked their place in the last 16 of the Champions League for only the second time in the competition’s current format.

Amorim’s overall record at Sporting is superb, but the stats from the start of 2020/21 – the point from when we can consider it was “Amorim’s team” – are barely believable. Just 5 defeats in 62 matches and a 77.4% win percentage. 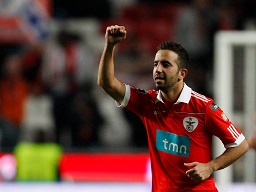 Ironically, Rúben Amorim spent most of his playing career at Sporting’s bitter cross-town rivals Benfica. The combative midfielder was at the Estádio da Luz throughout the whole of Jorge Jesus’ first spell at the club, a hugely successful time for the Eagles. Therefore, it is interesting to speculate how much Amorim was influenced by the charismatic Jesus. No doubt he picked up a lot of information, but both the conservative playing style of Amorim’s teams and his calm and composed media apparitions are almost diametrically opposed to what one associates with Jesus.

Before his decade playing for Benfica, Amorim began his career at another Lisbon club, coming through the ranks at Belenenses. He also had loan spells at Braga and Al-Wakrah, in Qatar, before calling time on his career in 2016. Amorim earned 14 caps for the senior Portugal team, playing in both the 2010 and 2014 World Cup.

Amorim began his coaching career shortly after hanging up his boots, initially at lower league Lisbon team Casa Pia in the 2018/19 season. He had not completed the necessary coaching badges however, and as a result the club fell foul of Portugal’s strict regulations in this area and incurred a 6-point penalty and Amorim was suspended. Although the ban was lifted, Amorim resigned.

Later that year Amorim turned down the offer to coach Benfica’s U23s, instead taking the reins at Braga’s B team. When first-team coach Sá Pinto was sacked in December 2019, Amorim was promoted for his first job in the top flight, going on to experience almost non-stop success, as detailed above.

Amorim is wedded to 3-4-3 with slight nuances in the attacking third, but never abdicating the three-at-the-back system. The wing-backs are often extremely attack-minded, especially Pedro Porro on the right who has been a fundamental part of Sporting’s offensive game plan under Amorim.

However, Sporting’s success has been built on the foundation of a rock-solid defence and it is fair to say they are fundamentally a defensive team. This season, although Sporting’s have arguably evolved into a more cohesive attacking unit, nine of the team’s 16 wins have been by a 1-0 or 2-1 scoreline. And if we ignore the outlier of the 5-1 thumping the injury-hit side suffered against Ajax, Sporting have conceded just 10 goals in their other 19 matches in 2021/22. 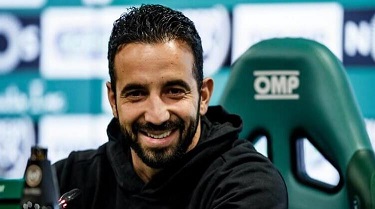 The art of communication

Amorim’s success in terms of results, hugely increasing the net value of the squad, and earning millions of euros via Champions League qualification and progression can be equated to the bottom line measuring a commercial company’s success. But what Amorim has brought to the club is something more intangible yet just as important: a clear sense of direction, ambition and razor-eyed focus.

His pre-match and post-match press conferences are a breath of fresh air compared to the vacuous football-speak that so often characterises these occasions. In Portugal in particular, press conferences have historically been used mainly to direct barbs at rival managers or the Portuguese football authorities for supposedly biased decisions, but these side stories are conspicuous by their absence with Amorim.

Presenting himself in a calm, collected, jovial and objective manner, where clear messaging is evident, Amorim masterfully deflects all possible points of contention and makes a point of shifting the plaudits for the team’s considerable success to others.

When asked if the players who have become internationals and seen their careers take off under Amorim have expressed their gratitude to him, he replied: “thanking me? I should be thanking them for helping me achieve success.” When asked if Amorim the footballer (a workmanlike but unspectacular player, in the image of his Sporting team) would fit nicely into this team his answer was: “Amorim the player would not be good enough to get into this side.” On the day Sporting were crowned champions of Portugal, Amorim made a point of holding the post-match press-conference flanked by his entire coaching staff either side of him, a visible symbol of the collective spirit he has instilled throughout the entire playing and coaching structure.

High-quality players and teams in Portugal are, unfortunately, always celebrated with a slight sense of dread. The country is realistic about its place in the football food chain. As soon as players start making a name for themselves, especially in international competition, it becomes only a matter of time before they are sold to wealthier clubs playing in more high-profile leagues.

The same is true of coaches and Rúben Amorim is surely being tracked ever more closely by some of Europe’s top clubs. His name was even associated with Manchester United in recent days. When asked about it earlier this week Amorim brushed off the suggestion as “just rumours of no importance” and quipped that “United should contract ten Hag (Ajax coach and Sporting’s Champions League opponents), and right away!”

If a super club comes calling, the ambitious Amorim will surely be interested, but for the time being that does not appear an immediate likelihood. For all of Amorim’s extraordinary success, his portfolio remains a short sample size and major clubs would probably want to see a more sustained period of success before making a move. Secondly, Amorim has endlessly talked up the fact Sporting are building something lasting and has made young players an essential part of the set-up, suggesting he is in for the long haul. Finally, looking at his playing and coaching career, we see that in two decades involved in football Amorim has spent all but a couple of years in the Portuguese capital. Evidently it is where he feels comfortable.

Should he continue to exhibit the Midas touch, Rúben Amorim will inevitably move on, but it may not be for a while yet.