‘One might almost repeat exactly the report of the game with Reading as a description of the match at Shepherd’s Bush, for the failure to annex two points at the expense of the Rangers was due in a very large measure to the inability of the forwards to consummate good work in the open.

As last season and the season before, the Town were suited by the heavy conditions, and their general work entitled them to the honours, but the Rangers got the all-important goal that settled the issue.

It was the first game the Rangers had won this season, and once more we had the poor consolation of an admission from the home supporters and officials that they had been fortunate to win.

There could be no doubt about it, for, with the exception of one or two periods in the first-half, most of the Rangers’ good work came from raids, whereas the Town attacks were more sustained, more threatening, more promising. Alas!

There was only one forward of ten who appeared to realise the most successful tactics. That player was Birch, who was the oldest of the twenty-two, and, by all the laws of nature, he should have been the least effective under the new conditions.

There were faster and more vigorous forwards, men who did more galloping and snorting, but he conserved his energies, kept his position while waiting for the ball to arrive, then proceeded to draw opponents and to transfer to the colleague most advantageously placed. He made the Rangers a fairly good side. Without him they would have been a mob.

The only goal of the game came after ten minutes’ play, and thus early there had been thrills at each end. The greasy ball skidded over the slippery turf at a great pace, and it was from a long kick by one of the Rangers’ halves that the ball went straight towards Graham.

The pace at which it came from the ground deceived the back, who was only able to deflect it towards his right. He recovered and overtook it, but Ford, a stocky left-winger, had followed up quickly.

He knocked over Graham as the latter was about to kick the ball, and then centred neatly for Johnson to head an easy goal.

Luton’s forwards were playing the more accurate football, but they were not so dangerous as the Rangers, for the simple reason that the latter tumbled into the Town backs and never gave them the chance for a free kick if there were any possibility of hampering them.

For half-an-hour the Rangers were the better side. Then the Town improved immensely, and they frequently came within an ace of equalising. Opportunities were missed though. 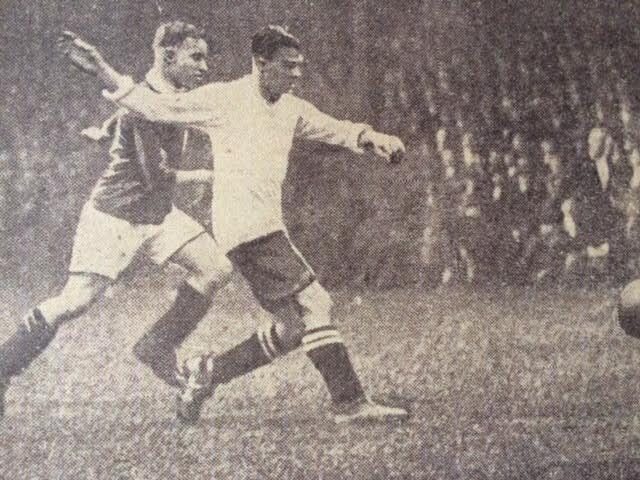 After the interval the Town had a much better share of the game. Hebden was prominent with clever saves, yet twice he could not get the ball away, and there two or three players lying on the goal-line with the ball only a few inches beyond reach but inviting the successful touch.

Then Dennis beat Hebden all ends up with a fast drive, only to see the ball strike the bar, and the lusty home defenders scramble it away.

Hirst once handled flagrantly in the penalty area and the referee actually raised his whistle to his lips but did not blow.

The Rangers’ raids chiefly came through the splendid use made by Birch of his wingers, who lay well up the field, and he seldom failed to get the ball right out to them. It was through these cunning moves of the veteran that the Town goal was several times in danger, and once Mingay brought off a glorious save from Spottiswood.

The home goal, however, underwent far more severe pressure, and in the closing stages, when the Rangers were showing signs of distress and delaying the game by every conceivable means, the Town could do everything but equalise.

Rain fell for the greater part of the game and also kept the attendance down to about 5,000.’

The report then goes on to analyse each Luton player’s performance, but then includes this on the Rangers:

‘For the Rangers Hebden was a good goalkeeper: Pierce and Plunkett were hefty more than happy: Richmond was a skilled pivot and probably the most sportsmanlike player of his side. His colleagues were just moderate. Birch was the outstanding forward, and Ford also did well.

(Ewart Ford is shown above. Thanks to Colin Woodley for his assistance)