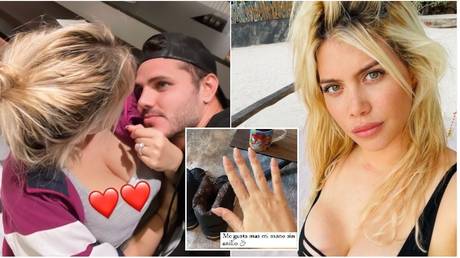 Model-turned-football agent Wanda Icardi has fueled speculation that her marriage to Paris Saint-Germain star Mauro is on the rocks, despite messages from the striker suggesting that the pair had kissed and made up.

Wanda Icardi sparked a social media frenzy over the weekend when she shared a cryptic Instagram message with her 8.6 million followers, stating “another family you ruined for a slut” and unfollowing her husband on the platform.

Many took that as an insinuation that PSG forward Icardi, 28, had been caught playing away, with various sources even hinting at the third party potentially involved.

Wanda and Mauro Icardi have two daughters together, while the 34-year-old former showgirl also has three sons from a previous marriage with Argentine footballer Maxi Lopez.

Icardi’s relationship with Lopez was the subject of major scrutiny after they split and the model shacked up with Lopez’s former friend and Sampdoria teammate Mauro, whom she married in 2014.

Never far from the headlines, this time the soap opera surrounds the status of Mauro and Wanda’s relationship, as she reportedly confirmed to an Argentine gossip journalist that the pair had “separated” while jetting out of Paris.

Mauro Icardi, meanwhile, was given permission to miss PSG training on Sunday for “family reasons” and later took to Instagram to share images of himself and his wife cuddling up together, apparently in Milan.

That hinted at a reconciliation, but Wanda Icardi added another twist to the drama on Monday when she shared a picture on social media with the message: “I like my hand better without a ring.”

Wanda Icardi continues to air her break-up from Mauro Icardi in public. ???? pic.twitter.com/iYb5gL0bNC

As the scandal drags on, PSG fans will hope that it does not distract their forward from his performances on the pitch.

Although down the pecking order behind the superstar front three of Lionel Messi, Neymar and Kylian Mbappe, Icardi is still a handy option to call on for manager Mauricio Pochettino when either of the trio are absent, or as an arrival from the bench.

Icardi has scored three times in nine Ligue 1 appearances for the French giants this season, including the late winner as a substitute against Lyon in September when Messi was controversially taken off by Pochettino.

Recent transfer rumors have claimed that PSG could be keen on a swap deal involving Icardi and  Barcelona's new arrival Sergio Aguero, who had headed to the Nou Camp under the impression that he would be playing with Messi before the six-time Ballon d’Or winner made his shock summer move to Paris.

Model and TV personality Wanda has been a controversial force in the career of her husband, acting as his agent and being deeply involved as the former Inter Milan captain left the club under a cloud for PSG in 2019, initially on loan before the move was made permanent.

Wanda Icardi was targeted by angry Inter fans amid contract negotiations for the forward, reportedly even having a rock hurled at her car as she traveled with her children near the Italian giants’ San Siro stadium.

Describing her formidable reputation as among the most powerful women in football, Italian journalist Giampiero Mughini said in 2019 that Wanda Icardi would “even scare Hitler.”