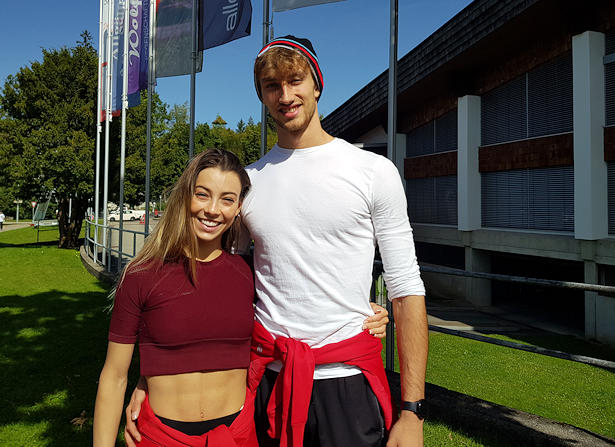 Laura Barquero and Marco Zandron of Spain at the ice rink in Oberstdorf, Germany, during 2021 Nebelhorn Trophy.

A little over a year ago, pair skaters Laura Barquero, 20, and Marco Zandron, 23, were not even skating together and now they are most likely headed to the Olympic Winter Games in Beijing. It does usually take some time for a new pair team to gel and to achieve success, but not for the Spaniard Barquero and her Italian-born partner. This would make the first time in figure skating history that Spain has ever had a pair team qualify for the Olympic Games.

“I have no words right now. I can’t believe it,” Barquero said after the team finished second at the Olympic qualifying competition in Oberstdorf, Germany, last month. “I think I have to see the video of the competition one, two, three times, four times, and maybe after the hundredth time, I realize it really happened,” Zandron added. The Italian still needs to receive Spanish citizenship to be eligible for the Olympic Games, but he is optimistic it will come through in time now that they have earned a spot in Beijing.

Prior to Nebelhorn Trophy, the team was off to an excellent start when claiming silver at Lombardia Trophy with strong performances. Observers had them down as top contenders for one of only three Olympic spots for pairs that were available in Oberstdorf. However, the skaters themselves did not dare to think it was possible.

“When we were starting the season, we were like, okay, we will go to Nebelhorn Trophy, but it doesn’t matter if we don’t get the spot, because it’s really difficult,” Zandron recalled. “We didn’t think that we could make it. We were under-estimating ourselves.” “Sometimes we should believe more in ourselves, because we are like, ‘Oh, we won’t make it,'” Barquero chimed in, laughing.

The team went on to finish a respectable sixth in a deep field at the Finlandia Trophy in Espoo mid-October.

“This competition was a little challenging, it was like a mini-worlds. I was more nervous than at Nebelhorn Trophy,” Zandron admitted. “We only had one week after Nebelhorn, so it was a little bit hard because we had been working for a long time and we were so tired after Nebelhorn, but the preparation was very good.”

“There are so many good pairs here,” added Barquero. “I think it is a really nice experience to see the other pairs and to learn from them. We are so motivated after Nebelhorn. We said, ‘let’s have fun’ as we want to continue and improve more and more. The other pairs have been together for a long time and they have a lot of experience. They are really confident in their elements.”

However, the new Spanish team is also confident in their elements. They have excellent throws for example. Both had previous pair skating experience when teaming up in August 2020 in Bergamo, Italy, but they came together more or less accidentally.

“At first we were skating together, but just to give us some training because we had split up with our previous partners,” Zandron recalled. “We were just trying to keep training, but when we were working together, we felt really comfortable and that’s why we started to think maybe we can be a real team. So, we started to do the elements and they were really good and we felt really good with each other.”

Some elements came easy to skaters, while others took a little longer.

“I think the hardest was the triple twist because it is an element of timing,” Barquero observed. “When you start a partnership with another person, you have to understand the timing of the other person and it requires some months to get to know each other.” On the other hand, the throw jumps came quickly. “When we were trying out, we did triple throws on the first day,” she said. Zandron added that the spins were especially difficult. “They were really ugly, both the pairs and the side-by-side spins.”

The team built a new Short Program for the season, to “Dawn of Faith” by Eternal Eclipse.

“We created a short program for the previous season and we just competing nationally,” Zandron explained. “So we were thinking about keeping it this season,” Zandron shared. “We were skating to “Je suis malade,” but we wanted something more innovative that you didn’t hear so much in ice skating. We wanted a more elegant program. We were researching a lot of music, but we couldn’t find the right one. Then we were watching Worlds and we heard the music of Bradie Tennell and we thought, ‘That is it!’ So thank you to Bradie for our music!”

The Free Skate is set to the famous song “Imagine” by John Lennon, but it is not the classical version.

“Our coach found this version of “Imagine” that I think is very original because it’s not the normal version,” Barquero said. “We like it very much because I’ve never heard this version before. We feel this music very well.”

At first, the team was thinking of bringing across a special message. “Because we were in the pandemic, we thought it (our message) was like, ‘Imagine the world without Covid again,’ but in the end, we chose not to go with this message because we don’t want to think about Covid,” Zandron explained. “We like to spread happiness,” his partner pointed out.

Barquero, who was a single skater in Spain, moved to Bergamo four and a half years ago to start a pair skating career with Aritz Maestu on the suggestion of the Spanish Figure Skating Federation.

“In that moment I said that’s my opportunity,” she recalled. “I love pair skating and I wanted to do it so much. I said to my parents, ‘I have to go, this is my dream.’ So I went to Bergamo, I did the tryout, and we started skating together.” Barquero and Maestu ranked as high as seventh at the ISU European Figure Skating Championships in 2019, but then Maestu retired due to an injury. Barquero then teamed up with Ton Consul, but this partnership lasted only for one season.

Zandron followed his older brother Maurizio, who now represents Austria as a single skater, into figure skating. He competed for Italy at the international level first in singles, then in pairs.

“I started pairs three years ago,” he said. “I really love pair skating. I was trying to figure out if pairs would be my future career and I started to skate with Federica (Zamponi) just for a junior season. I really enjoyed it because pairs is so interesting. There are so many elements and you cannot get bored. It is nice to be with another person on the ice in competition and to share the whole experience not only on the ice, but off the ice.”

The team currently resides and trains in Bergamo, Italy, under coaches Barbara Luoni and Luca Dematte. Luoni has coached a lot of pairs at different levels over the years, but she knew this team had good potential. But she wasn’t expecting the amount of improvement they have shown in such a short time.

“I started to coach Laura when she was with Aritz Maestu and I know that she is hard worker,” said Luoni. “Marco had a previous experience in junior pairs, before he started to skate with Laura, so I didn’t know how he would react in big competitions. Since the very beginning, they started to work really hard to build their elements and their feeling in training. I had the opportunity to use the Lombardia Trophy as a ‘test’ competition before the Olympic qualification in Nebelhorn Trophy. The result of the first competition was super good and helped me and my staff, Raffaella Cazzaniga and Luca Demattè, to understand what we needed to focus more.”

“I see them growing from competition to competition,” continued Luoni, adding that they are working hard on the solo jumps and unison. “In fact, at Finlandia Trophy, they were able to skate in the last group in free program. It was an exciting experience for them to learn from the high level pairs. Now I tell them they are ‘a new book to write’ and I hope we really enjoy every moment.”

The pair skaters have become a couple off the ice as well and they feel they balance their relationship very well.

“We are partners in crime, like Bonnie and Clyde,” said Zandron. “We really like to share this experience with each other. At the beginning, maybe we had to find the right balance, but actually our relationship really helps us because every time something doesn’t work, we know how to react and to make sure everything goes the right way as we know each other very well.”

They now plan to continue their season with competitions in Nice, France, and Warsaw, Poland, and possibly Dortmund, Germany. However, they are also looking beyond that.

“Now we are looking forward to Europeans and Worlds, the Olympic Games,” Zandron concluded. “Just do them, to perform good and to grow, to get better and better during the season and you never know what will happen.”

The post Spain’s Barquero and Zandron: ‘We want to spread happiness’ appeared first on Golden Skate.