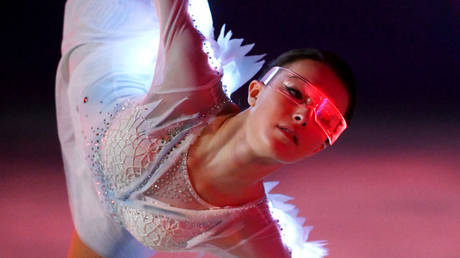 The competition will take place during the World Figure Skating Championships 2022, which Russia is barred from

Beijing Winter Olympic Games figure skating champion Anna Shcherbakova will captain a team at the Channel One Figure Skating Cup, which will overlap with the World Figure Skating Championships 2022 which Russians are barred from because of the attack on Ukraine.

The International Skating Union (ISU) exiled athletes from the Figure Skating Federation of Russia (FSR) from taking part in its competitions on March 1, clearing gold medalist Shcherbakova and other top stars to take part in a competition now scheduled to take place between March 25 and 27 in Saransk.

Shcherbakova would have defended the overall and short program titles she won at last year's championships in Stockholm, where Russians led the final medals table with three gold, one silver and two bronze finishes.

Anya and Mark Kondratiuk will become the team captains at channel one cup#AnnaShcherbakova #АннаЩербакова pic.twitter.com/nyNTjD3ynX

Alexandra Trusova, who earned silver in Beijing, won gold ahead of Shcherbakova in the free program at that competition, and compatriot Elizaveta Tuktamysheva was also among the medalists.

Mark Kondratyuk, one of the Russian Olympic Committee skaters to have won gold in the team event in Beijing, will also captain a team at the Channel One cup.

Kondratyuk, Shcherbakova and their teammates from the Games are yet to discover whether their Olympic triumph will be allowed to stand.

The medal ceremony for the event was canceled after Kamila Valieva, who played a pivotal role in the ROC win, was revealed to have tested positive for a substance banned by the World Anti-Doping Agency in an announcement made a day after the team competition ended.

A heart drug was found in Valieva's system from a test taken at the Russian national championships on December 25 2021, leading to controversy over why the results had taken so long to materialize.

A Court of Arbitration for Sport hearing allowed Valieva to continue to skate at the Games but no decision was made on whether the title win she starred in would remain valid.

Kondratyuk finished second in the men's category behind Mikhail Kolyada at the Channel One competition in 2021, which was held in Moscow.

Valieva won the women's overall competition ahead of Shcherbakova and Trusova.

The ISU said no athletes from Russia or Belarus would be invited or allowed to participate in international events.

In a statement eight days after the conflict in Ukraine began, the governing body claimed it had made the decision to protect the integrity of competitions and ensure the safety of participants.