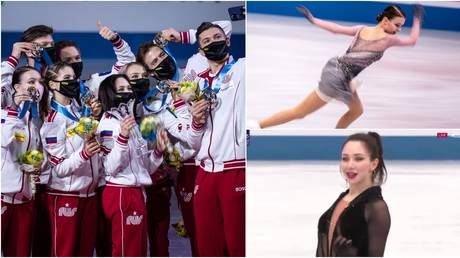 Heading into the final day of competition in perfect position to take home the title, Russian world champions Anastasia Mishina and Aleksandr Galliamov added to their team’s points haul by winning the pair’s free skate in Osaka on Saturday.

It was then over to Shcherbakova and fellow star Elizaveta Tuktamysheva to complete the job as they finished first and third respectively in the women’s free skate.

That put Russia well clear at the top of the table on 125 points, with defending champions the USA settling for second on 110 points, narrowly ahead of hosts Japan in third on 107 points.

Russia clinched the trophy for the first time since the launch of the tournament in 2009. America (four wins) and Japan (two) had shared glory in all the previous editions of the competition heading into this year in Osaka.

The biennial event sees the six best ISU nations come together to compete across four disciplines, with two men, two women, one pair, and one ice dance entry for each country.

Saturday’s triumph was capped by another brilliant display from 17-year-old world champion Shcherbakova, who tallied 160.58 points for her free skate routine, ahead of Japan’s Sakamoto Kaori in second with 150.29 and Tuktamysheva – at age 24 the ‘grand dame’ of Russian figure skating – in third with 146.23.

“I want to say I'm so proud of my team; we all skated so good after a difficult competition, after worlds we were so tired,” Russia captain Tuktamysheva said afterwards.

“But we showed all of our power here; [we were] so strong. That's why we were able to [be] in first place.”

Shcherbakova produced a typically bold routine as the only female to attempt a quad at the event, saving the landing on her opening quadruple flip before nailing seven triple jumps and two double Axels.

“I really wanted to show good skating," the precocious youngster was quoted as saying.

“I was trying to enjoy it. I was really proud to be here and skating for Team Russia.

“I couldn’t let up after Stockholm [World Championships] because of this competition, but now that this is over, I can finally relax.”

With the Beijing Winter Olympics less than a year away, Russia looks primed for a strong showing with the likes of Shcherbakova, the evergreen Tuktamysheva and their teammates laying down yet another marker for their rivals.