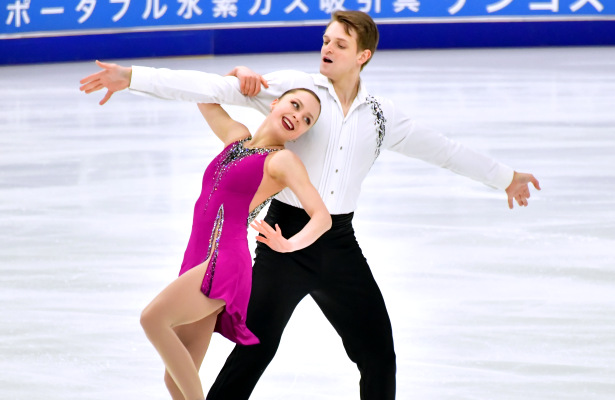 Aleksandra Boikova and Dmitrii Kozlovskii of Russia perform their Free Skate at 2020 Rostelecom Cup in Moscow.

Due to the ongoing COVID-19 pandemic and travel restrictions, the ISU Grand Prix of Figure Skating events are primarily domestically run events with domestic skaters and skaters who train in the host country or respective geographical region.

Boikova and Kozlovskii delivered a spectacular routine to “Writing’s On The Wall” from Spectre in which every element and jump was rewarded with positive grades of execution (GOE). The 2020 European champions landed solid side-by-side triple Salchows and triple toe-double toe-double toes, a throw triple flip, and a huge throw triple loop. The triple twist, lifts, and spins were all graded a level 4 and the team scored a new personal best of 154.27 for first place in the free skate and overall (232.56).

“You can always add emotions, improve the quality of the elements,” said Boikova, when asked if they felt the free skate had peaked. “While this was not the absolute best we can do, it was certainly a very good performance today.”

Mishina and Galliamov were nearly solid with the exception of a popped jumped by her on the last jump in the side-by-side triple Salchow-Euler-triple Salchow combination. The 2019-20 Grand Prix Final bronze medalists still produced a good throw triple Lutz, throw triple loop, and side-by-side triple toes, as well as a level 4 triple twist and lifts. The team scored a new personal best of 146.46 for their routine to “Bohemian Rhapsody” for second place in the free skate and overall (225.80).

“Even a bad experience is an experience,” Mishina said. “Maybe we wanted to skate clean too much – not for the result, but for ourselves and to be pleased with ourselves. We were confident in our abilities and we’re in a good shape, but something did not go right.”

Panfilova and Rylov also earned a new personal best (136.23) after their program to “No One Ever Called Me That” from the Third Person soundtrack. Although she fell on side-by-side triple Salchows, the 2020 World Junior champions landed a very good throw triple loop with many positive GOEs, as well as a throw triple flip and a side-by-side double Axel-Euler-double Salchow combination. With a total score of 210.07, they maintained third place overall in their Grand Prix debut.

“We are pleased with third place here and with the fact that we were able to pull ourselves together after the failed jump,” Panfilova said. “We were nervous, because the practice didn’t go that well. Nevertheless, I think we made a step forward.”

What are your thoughts on the Men’s Short Program? Discuss @ GS Forums.