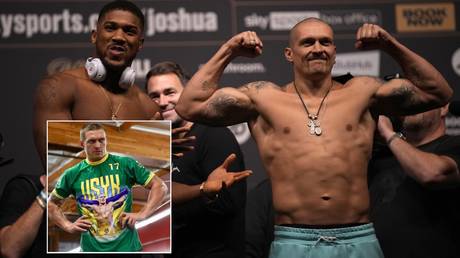 Oleksandr Usyk can cement his place in boxing folklore in London on Saturday night. But should he do so, the Ukrainian might not receive the unfettered love that would otherwise be expected back in his homeland.

The atmosphere will be febrile and firmly in Joshua’s favor – but Usyk is not likely to be cowed.

Already a generational great after unifying all four belts at cruiserweight, the undefeated Ukrainian can carve out an even more remarkable chunk of history if he captures Joshua’s heavyweight gold.

London has been a happy hunting ground during the career of the colorful, gap-toothed Usyk: it was here where he won Olympic heavyweight gold in 2012 – and where in a twist of fate, Joshua did the same at super-heavyweight.

Fight week in London has seen Usyk at his colorful best: donning Joker-style garb for his press conference on Thursday, juggling for the media at open workouts, and generally displaying the eccentricities that mark him out as one of boxing’s most eye-catching characters.

The consensus is that Usyk is not just a formidable boxer, but also a “likeable” guy – perhaps because of his quirks, rather than despite them.

A chest-thumping patriot, Usyk will ensure that the yellow and blue of Ukraine is on display in London this weekend.

Multitudes back home will thank him in return, proud of a man who represents the nation with honor in boxing rings around the world.

It is not, however, a story of complete reciprocity.

Indeed, some in Ukraine will find themselves more conflicted over their support for Usyk, who despite his flag-draped displays has had to contend with criticism in Ukraine to accompany his success – and not because of his craftwork in the ring.

Politics – in this case of the geopolitical nature – have much to do with it.

Usyk was born in the city of Simferopol in Crimea, which rejoined Russia in a landslide referendum in 2014.

Usyk now lives with his wife and children in Kiev, but still visits his family in the peninsula – as he noted in an interview last year.

Ordinarily that wouldn’t be problematic, but with the Kiev authorities still unwilling to accept the return of Crimea to Russia, trips into ‘occupied territory’ are frowned upon.

Indeed, one of Usyk’s greatest performances in the ring – his cruiserweight title unification fight against Russia’s Murat Gassiev in Moscow three years ago – was accompanied by criticism that he had not used the occasion to tub-thump.

“Many expected from you a statement in the enemy’s lair, which called for the aggressor to stop the war in Donbass, return Crimea to Ukraine, free the political prisoners and prisoners of war and so on," said Ukrainian MP Vitaly Kupry after initially congratulating Usyk.

“Unfortunately, you never mentioned Ukraine in your post-fight press conference, and immediately after in the ring even thanked the Russian people for their support. And your belated thanks online was obviously done under public pressure.”

Before Usyk’s last fight, against British heavyweight Derek Chisora in London, an opinion piece appeared on fans website The Comeback in which Ukrainian sports editor Alex Sereda explained why he couldn’t support Usyk – and why “many others feel this way.”

Identical accusations have been leveled at another generational boxing great from Ukraine, Vasyl Lomachenko (who is with his friend Usyk in London this week) – not least when he posted a religious message on Instagram apparently featuring Russian special forces.

“Usyk and Lomachenko should stop speaking and acting like those who wouldn’t mind Ukrainian flags being replaced with Russian ones as long as their asses are in warm and safe places, with the cash register still ringing,” said Sereda in his hit piece.

“They haven’t lived up to their real fight in a much more important ring. Waving the national flag or wearing a tracksuit with Ukrainian symbols isn’t enough for people of their public caliber.”

It’s not just politics that has been used against Usyk.

A devout Orthodox Christian, the boxer was seen crossing himself before stepping onto the scales at Friday’s weigh-in in London – just one sign of his faith.

But for some in Ukraine, Usyk and Lomachenko are the wrong kind of Orthodox Christians as the pair remain in a branch of the faith which is connected with the Moscow Patriarchate.

Last year, both boxers appeared in a religious film, ‘Hello, Brother! Christ has risen!’, in which they spoke about the importance of their beliefs. Lomachenko in particular emphasized that he considers Ukrainians, Russians and Belarusians as one and the same people.

The pair were hit with a backlash, being added to the infamous ‘Myrotvorets’ list in Ukraine of supposed ‘enemies of the state’.

Usyk was unrepentant, saying: “My country is Ukraine. I live here, I was born here, I grew up here. If I wanted to leave, I would have done that a long time ago.

“You won’t force me out because it’s my country. Don’t divide people. We are Ukrainian. I’m Ukrainian, it’s written in my passport.”

In 2014, Usyk was on record as saying he considers Crimea to be Ukraine; since then, he has said that Crimea is ‘God’s’, emphasizing that the people who live there are the priority, whatever the politics.

Often, Usyk has dodged political questions with the same artful skill he slips punches in the ring, but he has bitten on some occasions.

“Who have I betrayed? I represent Ukraine all over the world. I raise the Ukrainian flag. The anthem is played. That’s my answer to you provocateurs,” he said in 2018.

Usyk’s wife has Russian citizenship and the boxer uses Russian as his first language – even though he made a point of giving interviews in Ukrainian at his press conferences this week.

He has reportedly turned down offers of Russian citizenship, saying: “I didn’t even think of giving up my Ukrainian passport, because I consider myself a patriot of my native country and sincerely want Ukraine to prosper. Through God, I was born in Ukraine. Therefore, I’ll always remain Ukrainian.”

Usyk did, however, reject the ‘Hero of Ukraine’ award back in 2018, not considering himself worthy of his country's highest honor.

“A lot of people have done more than me, doctors, teachers, scientists who really deserve this. Thanks to my people, I’m already a hero, I don’t need any stars. I’m a normal guy,” said the boxer.

On Saturday night in London, Usyk will assume the role to which he is so well accustomed – that of a generational boxing talent going about his craft in the ring.

Millions back in Ukraine will support him, willing him on as he attempts to elevate himself to an even more elite boxing Pantheon.

But it is perhaps sad that some will be unable to do so, instead burdening Usyk with caveats and complexities that aim to diminish the man and his achievements.

The statements, views and opinions expressed in this column are solely those of the author and do not necessarily represent those of RT.