EDDIE HEARN has claimed Tyson Fury and Dillian Whyte have ‘different problems to resolve’ but they will not ‘affect the fight’.

The 33-year-old British rivals are due to settle their score on April 23 at Wembley.

It came after a record-breaking £30.6million WBC purse which was won by Fury’s promoter Frank Warren.

Hearn, who bid £24m, as a result has no official role in the mega-fight but has promoted Whyte for large parts of the heavyweight’s career.

And he claimed there are still disputes going on behind-the-scenes – leaving him happy to take a backseat.

IT MUST BE GLOVE

“I don’t think it’s gonna affect the fight. But, to be honest with you, I’m so glad I’m not involved.

“Because I’ll just turn up or whatever I’ll do, tune in and watch it. Hopefully they both get in the ring and give everybody a great fight.”

Whyte is still set to take the WBC to arbitration after only receiving the minimal 20 per cent split of the purse.

But he argues his ‘interim’ title should guarantee up to 45 per cent. 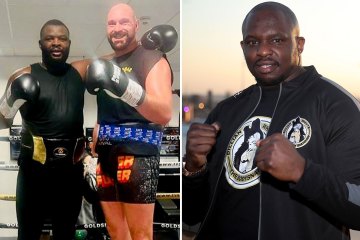 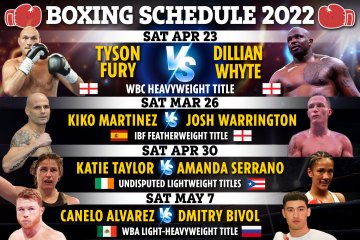 PUNCH IT IN YOUR DIARY

Currently, Whyte is set to earn £6.1m but an extra 10 per cent will be rewarded to the winner – meaning he could bank over £8m.

Promoter Warren hit out at the contender for failing to attend the pre-fight press conference.

In response, Whyte’s team said a number of their requests were not met, resulting in the no-show.

Dillian Whyte is in dispute with the WBC[/caption]
Загрузка...