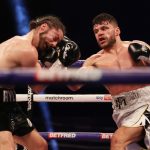 Florian Marku climbed off the floor to stop Rylan Charlton, topping the David Avanesyan-Josh Kelly undercard at the Wembley Arena in London.

Marku moved to 8-0-1 (6KOs) and afterwards called out Conor Benn.

“Rylan is a really tough guy,” said Marku. “Congratulations to him. I showed today I can box and I could fight. I want fights people say I will lose; I want to prove everyone wrong.”

Charlton, who lost for the first time against six wins and a draw, had a good spell in the second round but Marku was speaking to him throughout and moments later blasted him with a crisp right hand. Marku, a London-based Albanian, was jabbing and moving well. He was the superior boxer and had some success as a southpaw, causing Charlton’s legs to dip dramatically with a right hand in Round 4.

Still, a sixth-round left hook from Charlton dropped Marku and threatened to change the direction of the fight. It had come from nowhere. Marku looked composed but Charlton was buoyed by his shot and he came out aggressively in the seventh. Marku’s gas tank seemed to be running low by the end of that session, although he landed a flash left hook that had Charlton miss a step on his way back to his corner as the round closed.

Marku’s output was dropping off but in the eighth he broke through with a series of heavy hooks.

Initially Charlton tried to fight back but Marku kept scoring and before further damage could be done the towel came in from Charlton’s corner at 2:18 of Round 8. The timing couldn’t have been better. It had been scheduled for 10.

They tagged each other in an entertaining and open first round. It was a free-swinging affair and Davies was caught and dropped with 15 seconds of the third remaining, having shipped a big counter right as he threw a left.

Valenzuela, who improved to 23-2-1 (13KOs), was docked a point in the fourth when heads clashed but Davies was chewing on right hand after right hand, holding his head high but grinding away with both gloves while his nose pumped blood.

Davies, an orthodox boxer, was fighting as a southpaw and it was an increasingly hard fight. Davies, now 20-3 (13KOs), took some big shots in Round 6 but was constantly game and having his own success. Trainer Dominic Ingle seemed to want him to stay southpaw and Valenzuela’s face was becoming bloody, cut under his left eye and bleeding by his right.

Davies was dogged to the last but the Mexican got the verdict he’d deserved.

Gill boxed smartly and as the fight progressed the Mexican looked increasingly untidy. Suarez kept pressing, however, and scored with a volley of shots as the fifth round closed while Dave Coldwell-trained Gill attempted to cover up in the corner. It was a hard fight without becoming grueling but the class came from Gill, the persistence and grit from the Mexican.

Fisher scored two knockdowns (the first when referee Ian John Lewis adjudged the ropes had kept Gordon up), finally clubbing his opponent to the deck before the fight was waved off at 2:29 seconds of Round 1. Gordon is now 2-6-1.